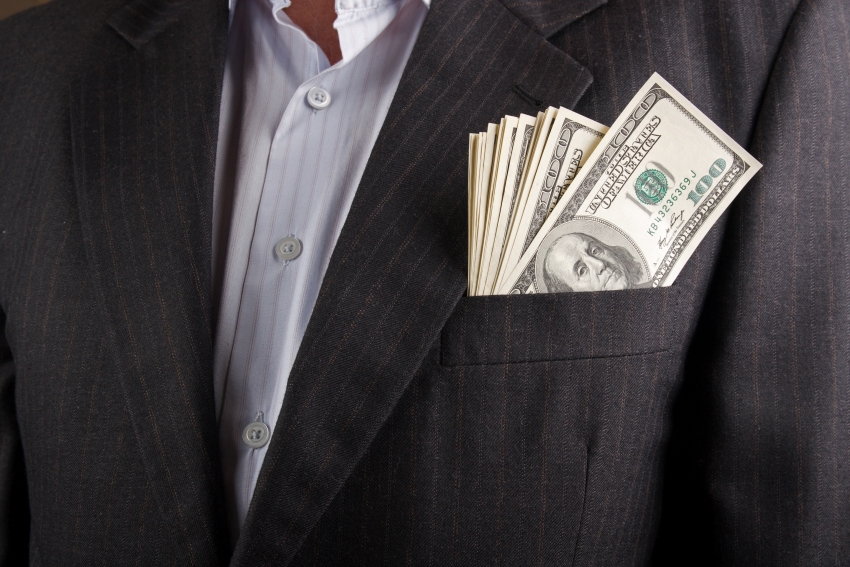 Joe Ricketts has made odious use of his wealth. (FotoYakov / shutterstock.com)

Late Thursday afternoon, multi-billionaire Trump donor Joe Ricketts shuttered the Gothamist and DNAinfo media empire he conglomerated in March. Ricketts closed the sites a week after staffers voted to unionize. In the process, he also made a stellar case for a $1 million maximum income.

What is a maximum income? Taxing every penny someone makes over a million dollars by 100 percent and putting it back into public coffers.

It would be hard to think of a better test case than Mr. Ricketts, whose net worth is around $2.1 billion and who—like many rich people—uses his wealth irresponsibly, and to the detriment of society.

Ricketts spent millions of dollars supporting Republicans in the 2012 election cycle. During that time, he launched a $10 million ad campaign, predicated on describing then-sitting president of the United States—“Barack Hussein Obama”—as a “metrosexual, black Abe Lincoln.” The final version of the ad featured Americans who voted for Obama in 2008 but had since grown disillusioned, and was crafted in large part by Steve Bannon. Yes, Bannon directed the less racist version of an advertisement paid for by Joe Ricketts.

This isn’t the only odious use Ricketts has made of his wealth. In the 2016 election cycle, he gave $1 million to Donald Trump's presidential campaign after having supported other Republican candidates with millions of dollars in the Republican primaries. Ricketts’ Ending Spending Action Fund—the Super PAC he founded, which sponsored the anti-Obama ads—aims to put an “enforceable cap” on public spending and brand those who advocate for expansionary fiscal policy as “budget bandits.” Despite railing against public spending, Ricketts, whose family owns the Chicago Cubs, has also accepted a generous public subsidy to build the team’s spring training facility.

What if he just couldn’t do all that, every piece of which involves having amassed vast stores of wealth? As they attempt to overhaul the tax code, Republicans have argued that one of their chief aims is to make the tax code simpler for average Americans. This is a lie, of course, but the goal is a worthy one. And what simpler solution than redistributing the wealth of everyone earning more than a cool million?

It's not that we need rich people’s money to fund vital public programs. There's no one-to-one accounting between how much money the federal government takes in through taxation and what it can spend. Were that the case, going to war—a costly endeavor—would involve much more heated political debates.

As Raúl Carrillo and Jesse Myerson explained recently in Splinter, governments frequently run deficits on the basis of which services they prioritize and which they opt to farm out to the private sector. That’s why budgets and tax codes are primarily political documents, not finely-tuned balance sheets. As Carrillo and Myerson write:

A household or a business may have to stash or borrow money before it can spend any, but we are users of the currency. The U.S. government, which is the issuer of the currency, works differently: Congress votes to spend “new money” on something, then the Treasury and the Federal Reserve credit the relevant bank accounts, and ... that’s it.             The government has spent new money into existence. Later, Congress may tax “old money” back out of existence, but it isn’t collecting money in order to spend it.

A maximum income—and progressive taxation more generally—is less about redistributing income than about redistributing power, though the two aims go hand-in-hand. If you think this sounds like radical Marxist nonsense, consider what the Republicans are doing right now. The GOP’s newly-released "Tax Cuts and Jobs Act” would double the cut-off at which households become eligible to pay the estate tax—protecting multi-millionaires and starving public coffers of funds—while making it impossible to deduct expenses for healthcare.

Under the GOP plan, state and local tax credits would be fully eliminated for everyone but property owners, whose deduction would be capped at $10,000. Why? To make room for corporate tax cuts and more giveaways to the ultra-wealthy. Tax codes set a rough blueprint for what kinds of people and activities a society values most. For Republicans, that's a small cadre of 1 percenters and the corporations they run.

Of course, the inverse is also true: Governments can choose to prioritize good things, like support for the kind of neighborhood-by-neighborhood local journalism DNAinfo.com and Gothamist reporters built their site’s hard-won reputations on.

In Sweden, news outlets with at least 1,500 paying subscribers that publish at least once a week can apply for subsidies from the government. In France, the government subsidizes private news outlets, and many countries make it a priority to fund high-quality, independent-minded public broadcasting. The U.S. government could also prioritize funding the kind of robust social safety net that makes in-depth, investigative freelance reporting more possible.

As economist Marshall Steinbaum argued recently in Jacobin, progressive taxation can help make these types of social programs a reality, and has the more profound effect of curbing the influence of the ultra-wealthy and their ability to set national priorities—i.e. what gets funded and what doesn't. Progressives taxation, Steinbaum notes, “was originally enacted to tame the excesses of wealth and power that dominated the economy in the Gilded Age. The point was not to raise money, nor even, really, to shift the burden of taxation towards those better able to shoulder it (though the latter played a role). Rather, it was to fundamentally alter the distribution of power in society."

The point of implementing high taxes on the wealthy in the depths of the Great Depression, as Roosevelt did, was to “make it de facto illegal to be too rich,” Steinbaum writes. “When it’s illegal to be too rich, many of the things rich people do—exploit labor, monopolize markets, squeeze supply chains, offshore jobs, asset-strip their companies, commit fraud—aren’t worth doing.”

This creates a balancing effect on the economy—distributing money more equally, but also penalizing wealthy misanthropes like Ricketts and dampening the negative impact they have on the world.

Were we to enforce a 100 percent tax on all income over $1 million, Joe Ricketts would still be wealthy and—on a personal level—a bad guy. But he would be infinitely less rich, and wouldn’t have the same stores of disposable income to wield over the media landscape and our democracy.

We don’t need Joe Ricketts’ money to fund programs like universal healthcare or a thriving ecosystem of local media outlets. But let's take it anyway, because screw that guy.