Farmworkers Say “Us Too,” Demanding Freedom From Sexual Violence 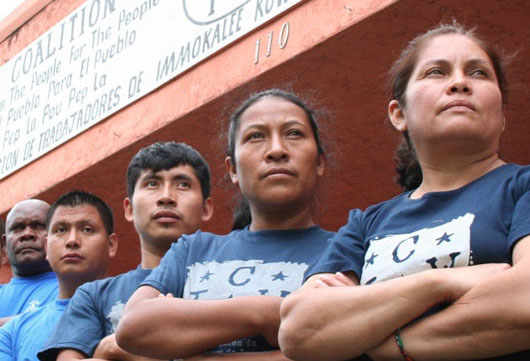 On November 20, farmworkers and their supporters marched through Manhattan to demand that Wendy's join the Fair Food Program of the Coalition of Immokalee Workers. (Photo courtesy of CIW)

Ahead of the Thanksgiving feast, the Coalition of Immokalee Workers (CIW) hit midtown Manhattan on Monday to face down the suits with chants of “Exploitation has got to go!” CIW was there to demand humane working conditions on their farms.

Peppered with brass-band musicians and street puppets, the protesters rallied at the New York, N.Y. offices of the fast food giant Wendy’s.

CIW members hoisted tomato and bucket-shaped picket signs with slogans like “freedom from sexual violence” and “Justicia” to face off against Wendy’s cheery, red pigtails. They demanded fair wages and freedom from violence and exploitation.

This week’s march, part of the coalition’s multi-city tour to promote its Fair Food labor protection program, put women workers at the frontlines, protesting the epidemic of sexual assault in agricultural labor, which affects as many as eight in ten women.

Decades before labor-relations courts and bureaucracy-laden contract negotiations, workplace disputes with powerful corporations were resolved with fists and clubs. And in Trump’s America, CIW workers are turning Florida’s vast tomato fields into the latest frontline in the struggle for the rights and dignity of immigrant communities.

“As farmworker women, this experience poses an incredibly hard choice; we don’t have another job, we have to suffer this abuse, because we have a family to maintain,” said organizer Lupe Gonzalo, speaking on the violence that stalks women working the fields, at an October gathering at a Minnesota theater. “Our silence is something we must grow accustomed to every day.”

Voices like Gonzalo’s rarely take the public spotlight in conversations on sexual violence and discrimination, but her words resonate deeply on the edges of the economy. As a minority in a male-dominated workforce, working in brutal, isolated conditions, women are exposed daily to sexual violence, be it coworkers’ harassment or rape by supervisors.

Wendy’s is now the lone holdout among the large restaurant chains that CIW has pushed over the years to sign onto its FFP code of conduct. Since the 1990s, the group has marched on college campuses, rallied at corporate offices and lobbied on Capitol Hill to promote an innovative form of collective worker protection that has evolved into FFP's worker-led social responsibility system.

Though not a formal union contract, the program's model, which now protects some 35,000 workers, essentially provides a bill of rights for thousands of laborers in Florida’s heavily consolidated agribusiness sector to promote structural change at all levels of the industry. The binding agreement mandates that all companies in the supply chain—including growers and retailers—provide an additional penny-per-pound premium that is passed through to pickers. This adds a considerable amount to workers’ annual wages. Meanwhile, the agreement ensures enforceable standards for fair working conditions, job security through direct, long-term employment and due process for abuse complaints.

“If there is a farm that is participating that is refusing to correct the situation in a timely fashion and bring swift consequences for abusers, then the market consequences kick in, because the corporations can no longer buy from those farms," Oscar Otzoy, a CIW organizer, told In These Times.

He says the underlying power of the process is its transformational effect on the worker community by helping train and empower workers as their own advocates for rights and safety at work.

“One of the essential elements of the coalition is that it is led by farmworkers themselves, and so we are from that community,” Otzoy says. “We share the same values and the same experiences and the same realities, so there is trust with workers that their complaints will be brought to a solution."

Often that solution is not just punishment, but also ensuring that the victim will receive needed rehabilitation services.

The CIW’s campaign has targeted a host of large chain restaurants, supermarkets and institutional purchasers, like university food vendors. But unlike Whole Foods and Taco Bell, Wendy’s continues to insist that its own corporate code of conduct can effectively be applied instead of the FFP.

In a statement sent to In These Times, Wendy's said that it is “promoting human rights and safe working conditions” through its own social responsibility program, with “assurances and requirements related to human rights and labor practices.” The company dismissed CIW's campaign as part of a “commercial dispute,” since Wendy's refuses to “pay fees to their organization” to support FFP.

Wary of self-regulating corporate standards, the CIW counters that the company is actually “deriving a very real cost advantage over its competitors, while continuing to provide an alternative market for less reputable growers.”

But while CIW’s model has garnered high-profile accolades, including honors from the Obama White House, it has also gotten the attention of anti-labor activists. The right-wing “watchdog” Center for Union Facts (CUF) issued a complaint in early November to federal tax authorities challenging CIW’s tax-exempt status as an educational charity, insisting that CIW is in fact a union front group—and should be regulated as such.

Painting the CIW’s protests as mob-like tactics promoting “harassment” of companies, the CUF argues, “CIW is essentially a group operating for the private financial benefit of a small class of people (certain agricultural workers).”

CIW defines its “small class” as the whole farmworker proletariat, and their model developed in response to the structural barriers to unionization in the highly stratified agricultural workforce where workers are unstable, often undocumented and intensely poor.

They operate like a union in terms of engaging in negotiations with bosses, but have more tactical agility in that they do not rely on institutionalized majoritarian reputation but grassroots mobilization.

As for the complaint about its tax status, Otzoy said those who complain “are just trying to roll back the human rights advances that we've been able to achieve.”

The FFP has spread widely, and CIW is working to bring their model to strawberry, pepper and dairy farms elsewhere in the United States. “It's the workers who are still speaking on behalf of themselves and moving forward the movement,” Otzoy says.

So when CIW worker-activists amplify women’s voices from Florida’s tomato harvests into the Manhattan’s streets, they put muscle behind Gonzalo's declaration as she spoke to communities across country: “We had to draw on enormous strength and courage in order to break our silence—but also, we did not do it alone.”