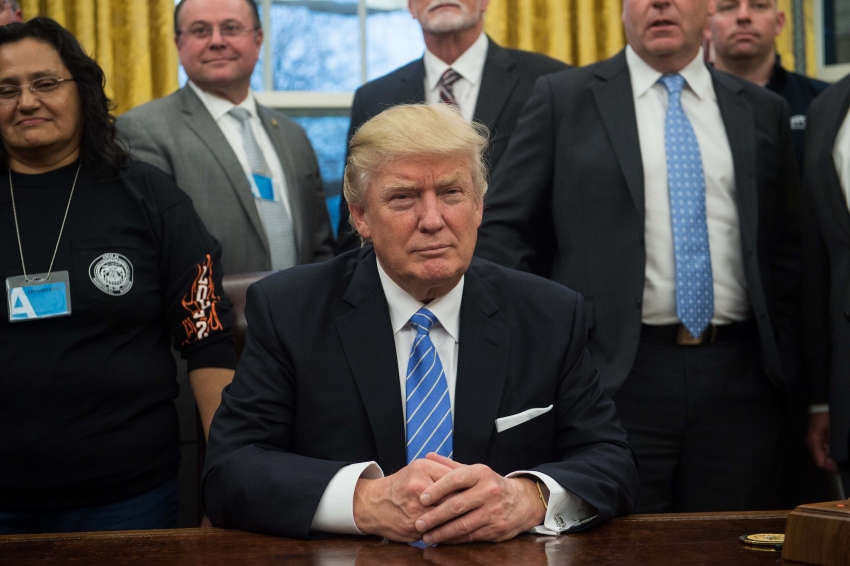 TOPSHOT - US President Donald Trump poses with labor leaders on January 23, 2017 in the Oval Office at the White House in Washington, DC. (NICHOLAS KAMM/AFP/Getty Images)

On January 5, the Department of Labor (DOL) quietly took a step to bolster the legal power of bosses over their workers by reissuing 17 previously withdrawn opinion letters. Developed at the end of George W. Bush’s final term, the letters had been withdrawn by the Obama administration, which discontinued the practice of issuing opinion letters altogether.

Opinion letters address specific questions submitted to the DOL by either employees or employers. The party then receives an official interpretation from the DOL Wage and Hour Division (WHD) detailing how the Fair Labor Standards Act (FLSA) and/or the Family and Medical Leave Act is implicated in their case. That opinion can then be used as guidance in future litigation. Other employers can also rely on an opinion letter, even if they didn’t request it themselves, as long as the facts are similar.

Critics of opinion letters point out that they take a long time for the labor department to craft (the George W. Bush administration averaged just 28 a year), and they only address one company’s specific situation—despite the fact that they can be used to the advantage of other employers in future cases.

There’s another big critique of opinion letters: They make it easier for employers to fight labor violation claims in court.

This sentiment was echoed by Michael Hancock, who managed the WHD opinion process for Bush’s final term. “It’s no secret that the opinion letter process largely serves the interest of employers; it gives them a legal defense if their practices comport with what the opinion letter says, even if the Department of Labor was wrong in what the opinion states,” he told Bloomberg last March. “It offers a serious and real significant defense to employers.”

Employers typically have the resources to pay their attorneys to talk with WHD officials before they request an opinion, so they can make sure they only ask if they are going to get a favorable result. The process is further skewed toward employers if the administration they’re requesting opinion from is employer-friendly—a fact that is certainly true of the Trump administration.

The Obama administration ended the established practice of issuing opinion letters and decided to issue a small amount of informal guidance documents instead. Last June, Trump’s labor secretary Alexander Acosta announced that he was withdrawing two of the informal guidance documents, a move that was hailed by business groups, as the documents both benefited workers. One of the letters dictated that subcontractors could be held liable if they failed to comply with FLSA requirements. The other offered an interpretation of “joint employers” and required some businesses to comply with the FLSA’s overtime rules.  That same month Acosta announced that opinion letters were returning.

Lawyers who say that they received favorable opinions for employers during the George W. Bush administration explained to Bloomberg how the process worked. Christopher A. Parlo, who represents management clients, said, “In the past you could go to DOL and lay out a scenario for them and they would give you their informal view on how that situation might play out. And if you didn’t believe that the result was one that would help your client or industry, you could choose not to ask for formal opinion. I thought that was a great process.”

The 17 Bush administration opinions that are being revived refer to a variety of topics, from year-end non-discretionary bonuses to salary deductions for full-day absences. Smith told In These Times that it was hard to know exactly what kind of impact these specific opinions would have, but said she thought that the move was at least partially symbolic: a signal to employers that the pro-business policies of Bush’s labor department have officially returned. “The message is, ‘We’re back,’” she said.

National Employment Law Project executive director Christine Owens issued a strong statement regarding the move, calling it “another example of how this administration is siding with big business to make it harder to get paid for working overtime and to make it easier for companies to reap the benefits of young workers’ labor without paying a cent for it.”

There’s a good chance that the WHD, which issues the opinion letters, will be soon be run by Trump nominee Cheryl Stanton, who is expected to be confirmed by the GOP-controlled Senate early this year. Stanton served as the White House’s principal legal liaison to the Labor Department under George W. Bush and spent years defending companies in labor cases. She’s also had an unpaid wage scandal of her own: In 2016 she was sued for allegedly failing to pay her house cleaners.

For the first time in over eight years, employers will be able to ask the White House for advice when they get tied up in legal battles. It seems quite probable that the pro-business forces dominating the Trump administration will have a lot to give.