In Davos, Trump Is Right at Home with the Global Financial Elite 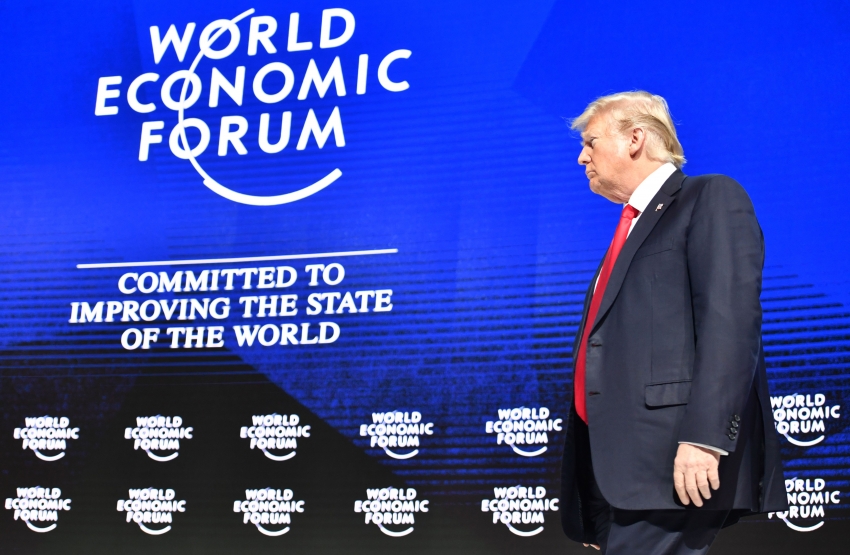 The Davos crowd are nothing if not materialists. (NICHOLAS KAMM/AFP/Getty Images)

Reading mainstream coverage of President Trump’s trip to the World Economic Forum (WEF) in Davos, Switzerland this week, you’d think he were an outsider coming to shake-up the global elites that frequent the annual summit—an anti-establishment “kid from Queens”, as the New York Times put it. Trump’s visit marks the first time a sitting U.S. president has attended the 1% confab since Bill Clinton made the trek in 2000, though there’s never before been an American president whose administration fit quite so comfortably in the Swiss Alps.

“We are all stronger when free, sovereign nations cooperate towards shared goals and they cooperate toward shared dreams,” Trump said in a much-anticipated and uncharacteristically scripted address Friday morning, sounding every bit like the head of a global branding empire that he is.

While it’s been fashionable for other Davos attendees to skewer Trump over issues such as his protectionist stances and his decision to pull out of the Paris Climate Agreement, there actually isn’t much daylight between him and the rest of the global elite when it comes to financial taxation or regulation, which Trump called “stealth taxation” Friday morning.

Trump’s presidency up to this point has offended some of the Davos crowd’s sensibilities, on the issue of trade especially. But compared to the xenophobic welfare chauvinism of France’s Front National, for instance, Trump’s administration has followed a much more classically neoliberal script. Above all, captains of industry of the sort Trump partied with this week want as few barriers to accumulating capital as possible. On that front, this White House has delivered in droves.

As events kicked off earlier this week, Goldman Sachs CEO Lloyd Blankfein—who’s issued sporadic anti-Trump missives on Twitter—voiced his support for Trump’s economic plan. “The animal spirits are out there and a little bit more vital than they would have been otherwise,” he told CNBC’s Squawk Box of Trump’s first year in office. “I'd say I like a lot more stuff than I don't like, and some of the stuff I don't like I really don't like," Blankfein added, sitting atop the mountaintop resort in Davos. "I think he's going out of his way to be very, very supportive of the system and I don't want to be antagonistic to that. Frankly, I want to honor that.”

J.P Morgan Chase head Jamie Dimon—also speaking from Davos—said he’s “bulled up…that policymakers are making good policy decisions in the U.S. about taxes, about proper regulatory reform.” Trump, meanwhile, has packed his cabinet with Wall Street alumni, and he brought a coterie of them to Switzerland this week.

Speaking to WEF founder Klaus Schwab after his remarks on Friday, Trump began by thanking him for the great time he’s had: “We had dinner last night with about 15 leaders of industry … I think I have 15 new friends.” Most of these titans of capital began the evening by complimenting Trump on his business-friendly tax bill, according to CNBC.

It’s not just policy priorities that Trump shares with the Davos elites, but a belief in how change happens. He spoke Friday about the plight of “hardworking men and women” of America with the same noblesse oblige that other world leaders frequently use when speaking about climate change—casting the problem as one that can be solved by throwing enough well-meaning rich people at it.

And like much of the rest of the Davos crowd, Trump himself is a wealthy business owner who stands to benefit enormously from loose financial regulations and cuts to corporate tax rates.

A report from Oxfam International in January 2017 found that just eight men own the same amount of wealth as half the world, or 3.6 billion people. A 2015 report from Oxfam found that the richest 10 percent of the world—individuals with the highest income and consumption levels—accounts for nearly half of personal consumption-based carbon emissions, while the poorest 50 percent are responsible for about 10 percent. What’s more, just 100 corporations—headed by the wealthy—have been responsible for about 71 percent of all carbon emissions since the Industrial Revolution.

The Davos crowd are nothing if not materialists. For them, Donald Trump isn’t a threat. Being forced to rein in their mass consumption and hunger for profits would be.