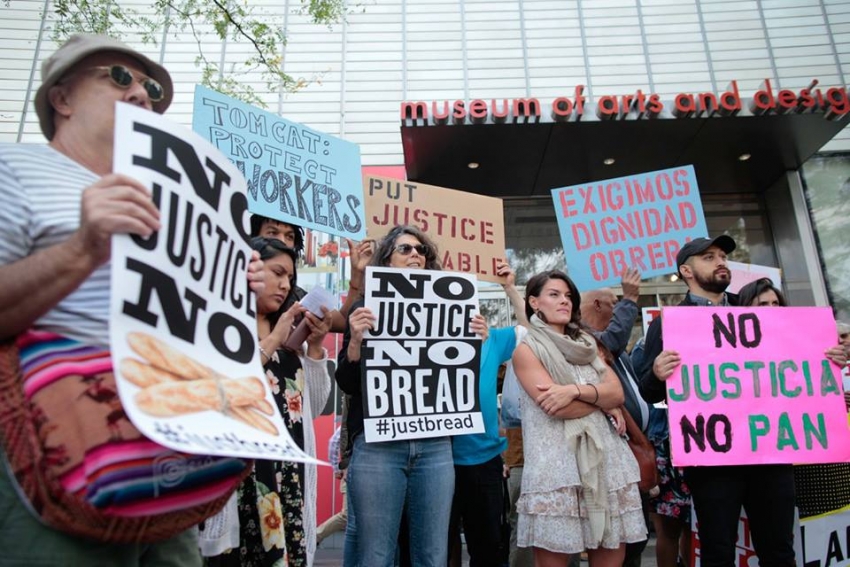 During the early morning hours of January 10, Immigration and Customs Enforcement (ICE) agents raided 98 7-Eleven convenience stores across the United States, demanding that managers provide paperwork for their employees. ICE ultimately arrested 21 workers, but publicly declared that they were just getting started. “This is what we’re gearing up for this year, and what you’re going to see more and more of is these large-scale compliance inspections, just for starters,” acting head of ICE’s Homeland Security Investigations Derek Benner told the Associated Press. “It’s not going to be limited to large companies or any particular industry, big medium and small. It’s going to be inclusive of everything that we see out there.”

Activists searching for effective ways to fight back against these kinds of sweeps might draw inspiration from a campaign that has emerged from Trump’s hometown of Queens. In December 2016, the Department of Homeland Security launched an investigation into Tom Cat Bakery—which appears to be the first wide-scale audit to hit New York City in 11 years. According to employees, more than 30 workers were called into private meetings to discuss the audit. They were informed by management that if they didn’t produce the necessary work authorization paperwork within 10 days, they would lose their jobs.

Brandworkers, a nonprofit group that has fought for the terminated employees, claims that Tom Cat was initially unwilling to share details of the audit and offered the employees no severance package. According to the group, an organized campaign ultimately forced the bakery to extend the paperwork deadline and offer workers a severance package if they chose to leave. However, the campaign was ultimately unable to stop the firings—although protests did succeed in galvanizing supporters to rally behind the workers.

In April 2017, at least 25 of the workers were fired. Some employees opted for the severance plan, which included a week of salary for every year they worked at the bakery. Tom Cat’s CEO sent a letter to the workers, stating: “While Tom Cat regrets losing valued members of our workforce, we must of course ensure that Tom Cat is in compliance with all applicable employment laws.”

Yet the severance offer and letter did not stop protesters from mobilizing against the terminations. After the firings, more than 100 protesters showed up in front of the bakery, holding signs, marching and chanting. Some even chained themselves to company trucks to obstruct morning deliveries. Four were arrested.

Activists and workers called on New York eateries throughout the city to go a “Day Without Bread” to draw attention to the campaign. As part of that coordinated action, the Sussman brothers’ Samesa restaurant donated 50 cents of every pita-bread-item sale to a fund for the fired workers, and Harvest & Ravel Catering donated a portion of every sandwich sale to the cause. After a letter-writing campaign led by the fired workers, the French restaurant Le Bernadin became the first customer to stop buying Tom Cat’s bread altogether. Brandworkers says that three additional customers have stopped buying from the bakery.

Jeanne Baron, an activist with the direct-action group Rise and Resist, tells In These Times she believes the Tom Cat fight is connected to the wider struggle against Trump’s immigration policies. “When I stand out on the street handing out fliers and telling people Tom Cat Bakery can and should do the right thing by its immigrant workers, I assume there are many would-be supporters among the pedestrians around me,” says Baron. “That's who I am after. Immigrants are being terrorized by an administration that demonstrates total antipathy for them.”

Former Tom Cat employees echoed these sentiments to In These Times, explaining what lessons they hoped other workers would pick up from their fight.

“My recommendation would be that [other workers] continue to fight with their compañeros, to remain united as a team, and to continue fighting for their goal,” says Elias Rojas, who also worked at Tom Cat for 12 years. “It is not easy, but we have to continue and fight for our families.”

“The main thing is to form a group between colleagues,” says Hector Solis, a former worker at Tom Cat Bakery for 12 years, “to join an organization…start a campaign and fight for [your] rights, and not let [yourselves] be trampled by some employers who simply close the doors on you without giving you one opportunity or any compensation.”

Sabino Milian, who worked at Tom Cat for 11 years, hopes their campaign will inspire workers throughout the country “so that they do not remain silent and fight for their rights not to be abused."

Tom Cat claims that the campaign against its business has been overhyped, pointing out that the majority of fired workers took the severance package—and that only eight ex-employees are seeking continued negotiations. However, as previously mentioned, Brandworkers says that Tom Cat kept news of the audit hidden from workers for months and originally offered no severance for the workers. In These Times reached out to Tom Cat Bakery for a comment, but the business did not respond by the time of publication.

In addition to its work with the fired employees, Brandworkers is fighting to establish an immigrant-protection policy for businesses that would notify workers about audits and provide safeguards against warrantless raids. The blueprint for such legislation has already emerged in California, where the Immigrant Worker Protection Act just took effect. The new law prohibits employers from allowing ICE agents to enter non-public areas or obtain records without a warrant. It also requires warnings before and after audits take place. California’s Attorney General Xavier Becerra has even warned that he will prosecute businesses that voluntarily hand employee information over to ICE.

These efforts couldn’t come at a more crucial time. The 7-Eleven sweeps mark a shift back to the policies of the George W. Bush administration in regards to unauthorized employees. In 2006, six meatpacking plants—most of them in the Midwest—were raided and about 1,300 workers were arrested as part of ICE's "Operation Wagon Train.” In May of 2008, the Bush administration carried out what was the largest workplace raid in U.S. history, arresting almost 400 workers at a kosher slaughterhouse in Iowa. Just a few months later, that record was broken when almost 600 Mississippi workers were arrested during a factory raid. Major workplace sweeps didn’t take place under Obama at the same scale, with the administration overseeing a more low-key approach to workplace enforcement while stepping up efforts against border crossers and people with criminal convictions. The Trump administration has doubled down on the staples of Obama’s deportation strategy as well, effectively combining the most draconian aspects of his predecessors’ immigration plans.

Baron says she hopes that the Tom Cat campaign can also serve as a blueprint for activists and workers fighting workplace raids around the country. “I want to demonstrate resistance to Trump's immigrant-hating policies and Tom Cat's complicity, and I want to give sympathizers something concrete to do that would actually make a difference,” she says. “If Tom Cat Bakery wakes up to the moral and economic imperative to find ways to publically stand by their immigrant workers, it will represent a model for business everywhere. If a few high-profile businesses get it, that's leverage. That's a movement. That's resistance.”