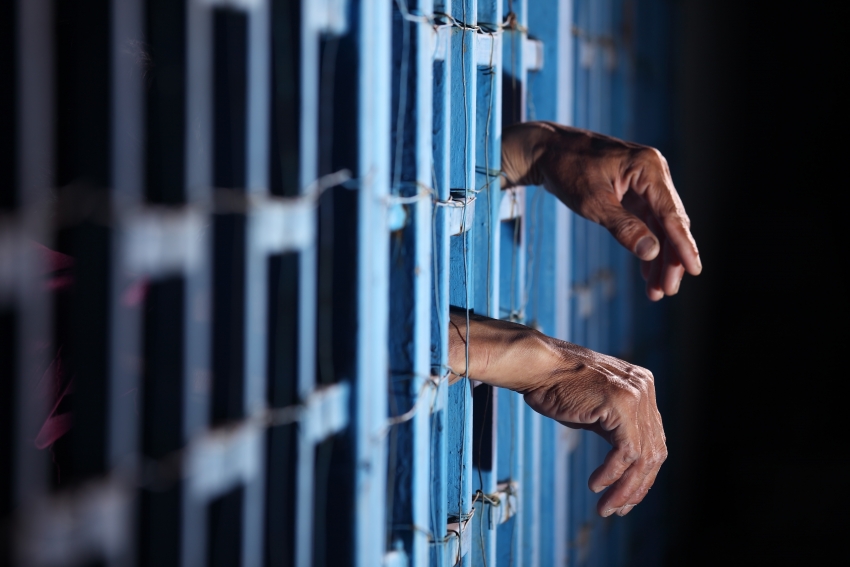 Those who can afford to pay bail can go home to await their day in court. Those who cannot — approximately 450,000 people on any given day — stay behind bars. (sakhorn/shutterstock.com)

The premise of Mariame Kaba’s idea, which she tweeted on New Year’s Eve with the hashtag #FreeThePeople, was simple — donate the price of one drink to a local bail fund, organizations that raise money and post bail for people who would otherwise languish in jail until their day in court.

Organizers took up the call to #FreethePeople. Chicago organizer Kelly Hayes reached out to others to create memes to circulate and keep momentum going. She and Kaba also compiled fact sheets about cash bail and its consequences. “We wanted to use this as an opportunity for education, not just to raise money,” Kaba explained.

Their efforts took off and, in one day, raised over $233,000 for at least 14 local bail funds across the country. Hundreds of people participated, tweeting and retweeting the calls, creating graphics for the event or tweeting the amount they donated as a way to encourage others to do the same. Some used the hashtag to educate about how cash bail works — and its devastating consequences. Those thousands of dollars are now enabling them to post bail for hundreds of people.

In courtrooms nationwide, when a person first appears in court after arrest, the judge has the option of releasing them, jailing them until trial or setting bail. The reasoning behind bail is not because the person is deemed a risk to themselves or their communities. Instead, the reasoning is based on money — by paying a certain amount, that person is more likely to return for subsequent court dates. If they fail to show up, they forfeit that money.

In practice, however, bail sets up a two-tiered system for the 12 million people arrested each year: those who can afford to pay bail can go home to await their day in court. Those who cannot — approximately 450,000 people on any given day — stay behind bars, making up two-thirds of the jail population.

In Massachusetts, for example, between 77 and 88 percent of women remained in jails (and in the state prison’s overcrowded Awaiting Trial Unit) because they and their families could not afford to post bail amounts of $2,000 or less. In New York City, approximately 85 percent of people held at Rikers Island, the island-jail complex notorious for its culture of violence, are still awaiting their day in court.

The consequences of not being able to afford bail extend beyond days lost. Though technically innocent until proven guilty, while waiting in jail, people often lose their jobs, homes, access to social services and child custody. Moreover, those languishing behind bars are more likely to plead guilty as a way to escape the often-hellish conditions of local jails. People who refuse to plead guilty can spend years in jail and suffer tremendous violence during that time.

Just look at Kalief Browder, the teenager who refused to plead guilty to stealing a backpack and spent three years at Rikers Island, where he was assaulted by both staff and other teens. After three years, the prosecutor finally dropped the charges, but the violence and trauma he suffered at Rikers continued to haunt him. Two years later, he committed suicide. Kalief’s story is only unusual in that it’s well-known; countless others remain in similarly hellish conditions.

The inequalities inherent in bail — and its role in enabling mass incarceration — have gained critical attention in recent years. In various cities, organizers have created bail funds, which are revolving funds that post bail for those who cannot otherwise afford freedom. Once that person’s case is completed, the courts return the money (minus any fees) and bail fund organizers use it to buy someone else’s freedom.

#FreethePeople was the latest in several mass fundraisers around bail in 2017. In the weeks leading up to Mother’s Day, organizers launched Mamas’ Bailout Day, raising over $1 million to post bail for at least 106 black mothers in time for the holiday. Their efforts weren’t limited to people who were biological mothers, but extended those who were embraced as mother figures by people in their communities. They also connectedpeople to support services and resources to ensure that they can take care of themselves and their families. For Father’s Day, Gay Pride, Juneteenth and Black August, another 82 people were bailed out.

In December, the Massachusetts Bail Fund and Black Lives Matter Cambridgelaunched a holiday bailout. Each week, organizers sat in courtrooms or visited local jails to identify and post bail amounts of less than $500 for people who would otherwise remain in jail. That month, they bailed out 78 people in the Boston area alone.

But buying freedom for 78 people isn’t cheap. Atara Rich-Shea of the Massachusetts Bail Fund noted that, altogether, those bails cost $41,591 and credits a grant from National Bailout, a coalition of organizations, for allowing them to post bail for 24 more people than they would have been able to otherwise. In Massachusetts, each bail is accompanied by a $40 fee, which is not refunded.

Among them was a pregnant woman held in the state prison’s Awaiting Trial Unit. The organizer who posted her bail recounted that, before the two parted ways, the woman told her “how scared she was for her and her baby’s safety. And also how impossible it is to get proper sleep on a prison bed. She was so relieved to be out.”

In Connecticut, organizers with the Connecticut Bail Fund and the Immigrant Bail Fund also held a holiday bailout, freeing 29 people from local adult jails, youth detention and immigration detention. The amounts that they posted varied wildly. Co-founder Brett Davidson recalled posting a $50 bail for a man who did not have phone numbers of friends or family who could post his bond; the fund also posted $5,000 for a woman arrested for sex work. Connecticut does not charge a fee for posting bail, so all of the money is eventually returned to each bail fund.

#FreethePeople raised $26,060 for the Massachusetts Bail Fund. Combined with a matching grant for funds raised in the last two weeks of December, the Bail Fund now has $59,060, an amount that will allow them to free at least 100 people. #FreethePeople raised $2,127 for the Connecticut Bail Fund and another $4,312 for the Immigrant Bail Fund. Davidson noted that the latter funds went towards a $10,000 immigration bond in early January.

Bail fund organizers are not only working to free people from jail, but also fighting to end cash bail altogether. In some places, they are beginning to see results. Organizers with the Chicago Community Bond Fund, of which Kaba is an advisory member, have pushed for court interventions and worked with legislators on bills to change bail laws. In July 2017, in response to a lawsuit, a judge issued General Order 18.A, a rule requiring that all bails in Chicago’s Cook County must be affordable. The order applies only to bails set after that decision and organizers have noted that not all judges have been adhering to the new rule. Nonetheless, the Cook County Jail has had 1,500 fewer prisoners since the ruling took effect in September.

In Connecticut, grassroots organizing has been slower. Davidson notes efforts among policy makers to replace cash bail with risk assessment, which replaces one flawed system with another. Many of the people bailed out of local jails are housing unstable or homeless, thus making them more vulnerable to police contact.

“For us, it’s a challenge to even start the conversation about abolition and the cash bail system because most of the people we’re bonding out, it’s not a familiar concept,” he said. “We’re trying to create a conversation less about replacing the bail system with risk assessment and more about pretrial decarceration. That’s a longer process, to have those conversations and do the necessary organizing in the community.”

“People are organizing and not just giving their money in a charity way that actually reinforces the current system,” Kaba reflected. “It’s not just the actual bailing out, but the bailing out is super-important because, as we know, the cascading effects on people’s lives cannot be underestimated or minimized.”

Victoria Law is a freelance journalist focusing on women’s incarceration. She is the author of Resistance Behind Bars: The Struggles of Incarcerated Women (2012) and co-author of forthcoming Your Home Is Your Prison (New Press).