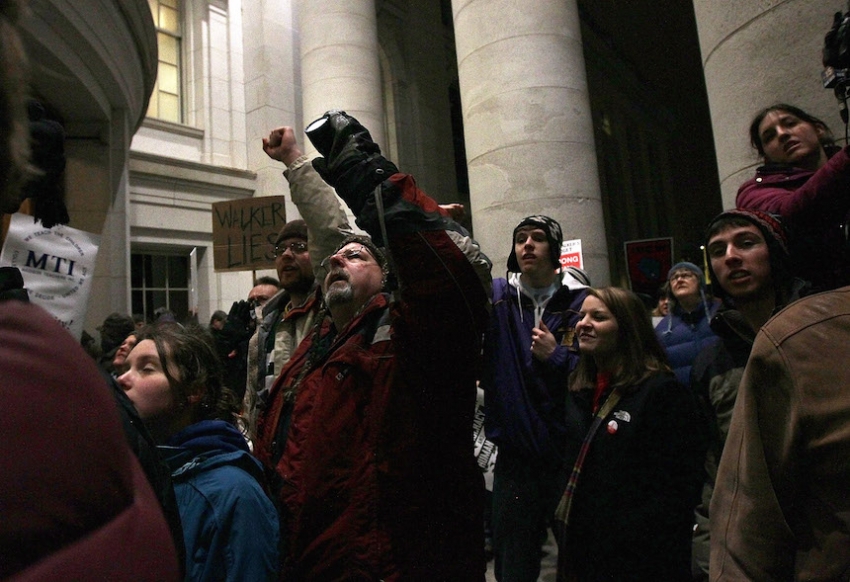 Janus v. AFSCME, which begins oral arguments on February 26, is the culmination of a years-long right-wing plot to financially devastate public-sector unions. And a Supreme Court ruling against AFSCME would indeed have that effect, by banning public-sector unions from collecting mandatory fees from the workers they are compelled to represent. But if the Court embraces the weaponization of free speech as a cudgel to beat up on unions, the possibility of other, unintended consequences is beginning to excite some union advocates and stir fear among conservative constitutional scholars.

The ruling could both wildly increase workers’ bargaining power and clog the lower courts with First Amendment challenges to routine uses of taxpayer money. At a minimum, it has the potential to turn every public sector workplace dispute into a constitutional controversy—and one Midwest local is already laying plans to maximize the chaos this could cause.

Toward labor’s bill of rights

From the earliest court decision dealing with workers’ protest activity—the 1806 Cordwainers Trial in Philadelphia–courts have strenuously avoided applying the First Amendment to unions. Instead, conservative courts treated unions as criminal conspiracies that interfered with employers’ property and contract rights.

I have been arguing that unions and their allies should be challenging the most unequal aspects of labor law as violations of our constitutional rights. Currently, employers in the private sector have a legal right to force employees to attend mandatory anti-union presentations, on penalty of firing. Workers can also be fired for making “disloyal” statements, even in the course of otherwise protected concerted activity. Meanwhile, the government has restricted the scope of issues that unions can legally compel employers to bargain over.

All of these practices are vulnerable to First Amendment challenges as government restrictions of workers’ speech. They become more vulnerable if the Supreme Court rules in Janus that every interaction that a union has with a governmental subdivision is inherently political.

Even more vulnerable are anti-union laws in the public sector. Take Scott Walker’s Act 10, which forbids unions from making bargaining proposals over anything other than wages that don’t exceed the cost of living. Or the New Jersey case law that forbids teachers unions from even proposing restrictions on class size. How are those not explicit restrictions on workers’ speech?

The most common objection to this kind of thinking on the Left is that a judiciary that could buy such a craven argument as Janus will refuse to take the precedent to its logical conclusion and shamelessly waving away workers’ free speech rights. That may be true, but there is a decent chance that the next couple of federal elections could bring a “blue wave” that will alter the ideological make-up of the courts for decades.  Janus could hand new liberal majorities a roadmap for restoring a legal balance of power between corporations and workers. It’s enough of a possibility that conservative legal scholars have begun paying attention to the case, and they see the potential peril for their cause.

Every workplace dispute, a constitutional controversy

Amicus briefs in the Janus case have been rolling in since the summer. These briefs are filed by scholars and organizations who are not parties in the case, but who nevertheless have strong opinions about its outcome. They may (or most likely may not) be read by the justices, but they could influence questions and oral arguments at the hearing.

Most of the amici have been from the usual suspects. Right-wing think tanks are spouting the same tired clichés and intellectually bankrupt arguments. Union advocates question the standing of the plaintiff to even mount a First Amendment claim, argue in favor of respecting long-settled precedent, or—in a new argument—suggest treating agency fees as a kind of tax .

But two briefs stand out, both for what they say and for who is saying it.

One brief, filed by influential right-wing libertarian ideologues Eugene Volokh of UCLA and William Baude of the University of Chicago, actually argues for strengthening the 40-year-old precedent that Janus aims to overturn. The 1978 Abood decision was wrong, they argue, to moot the question of whether workers compelled to pay their fair share for union representation might have a legitimate First Amendment objection to how a union might spend any portion of their fees. That opened the door, Baude and Volokh say, to taxpayers making line-by-line objections to how the government spends its money. “Just as non-union members may find many reasons to disagree with a public union’s speech, there are countless grounds to object to other speech supported by government funds,” they write.

Pointing to government propaganda urging military enlistment and purchase of war bonds, the scholars note that there has never been an option for taxpayers to opt out of funding such practices with which they may disagree, nor even any kind of “equal time” right of rebuttal. A ruling for the plaintiff in Janus could tug at the loose threads of the very notion of a common interest in government.

Another amicus, filed by law professors Charles Fried of Harvard and Robert C. Post of Yale, warns of undermining the precedent set in the 2006 Garcetti v. Ceballos. That decision gave public sector employers “the broad discretion they need to manage their workplaces” by permitting them to compel employees to comply with directives they find politically objectionable. Ruling in favor of Janus, they warn, “would therefore threaten to transform every workplace dispute into a constitutional controversy.”

Fried served as Solicitor General under Ronald Reagan, so his brief likely carries more water with the conservative justices than pro-union arguments for status quo. Furthermore, swing Justice Anthony Kennedy wrote the majority decision in Garcetti, so he would presumably take interest in how the Janus case could blow his work up.

A lot of time and money and energy

One local union in the Midwest is champing at the bit to turn every disagreement they have with the bosses into a constitutional controversy. A January blog post by the Countryside, Ill.-based Operating Engineers Local 150, titled, “Union Busters Set Themselves Up for Janus Backfire,” was widely circulated in #1u social media circles. In it, the union eyes overturning the laws that have made public-sector bargaining illegal in many jurisdictions. It also suggests that workers should be able to opt out of paying for their pension funds’ lobbying expenses and taxpayers opt out of funding municipal lobbyists (the American Legislative Exchange Council (ALEC), for example, receives indirect support from many taxpayer-funded organizations.)

While the gauntlet thrown down by Local 150 was certainly exciting for the few minutes it took to read their fantastical plan to make utter chaos out of a post-Janus world, many readers were left wondering, Are these guys for real?

“We’re going to immediately respond by filing suits to say these laws are unconstitutional,” confirms Local 150 president Jim Sweeney. “Maybe we get screwed again, but we’re going to put corporate powers in a position where they’re forced to explain why workers should only have free speech when it serves them.” So, file that answer under: Hell to the yes.

Local 150 has a track record of pushing the envelope on legal arguments in defense of unions. They’re the union that filed Sweeney vs. Pence, a federal court challenge to Indiana’s “right-to-work” law. Although ultimately unsuccessful, it resulted in a strong dissenting opinion from Chief Judge Diane Wood that forcing unions to spend resources on non-members without compensation is an unconstitutional “taking” under the Fifth Amendment. That has become the legal argument that could overturn “right-to-work” laws around the country, with several cases wending their way through federal circuits at this very moment.

The union has already sent a formal demand letter, chock full of legal citations, to the Illinois Municipal Retirement Fund. In it, they complain that their members’ mandatory 4.5 percent retirement contributions are going towards Bank of America lobbying and demand to opt out.

More letters are on the way. Local leaders are hoping to trigger a few rounds of panicked, “WTF?” phone calls to Illinois Gov. Bruce Rauner and other Janus cheerleaders.

If enough unions follow Local 150’s lead and make enough hay out of Janus—or even pose a credible threat to do so—don’t be surprised if more conservative jurists rethink their strategy.