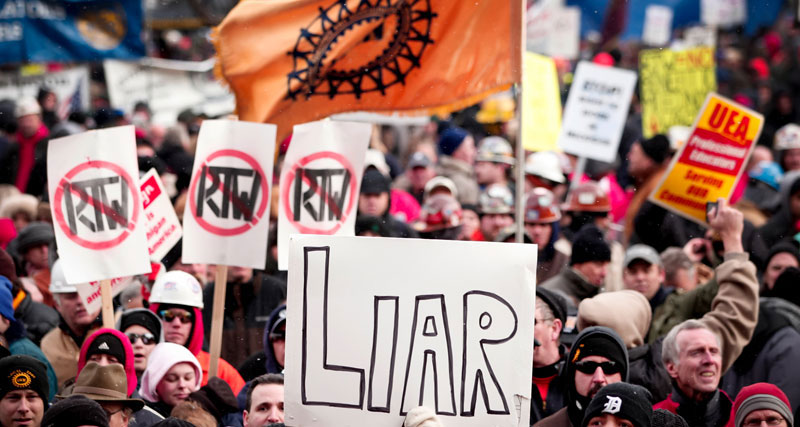 Union supporters had reason to cheer earlier this month when Wisconsin Gov. Scott Walker’s hated “right to work” law was overturned by a Dane County Circuit Judge. Unfortunately, the decision is all but certain to be overturned by Wisconsin’s conservative Supreme Court. But contained in the case is a line of questioning over the constitutionality of the right-to-work concept that has quietly been playing out in federal courts.

The result could be that all right-to-work laws are nullified—and sooner than you might imagine.

“RTW” takes money and power from unions, but is that a ‘taking?’

The logic that the Wisconsin judge leaned upon in his decision has its origins in a federal case called Sweeney v. Pence, in which unions made an unsuccessful attempt to overturn Indiana’s recent right-to-work statute on constitutional grounds. Although the unions themselves did not raise this argument in the 2014 case, Chief Judge Diane Wood argued in her dissent that “right-to-work” provisions violate the U.S. Constitution’s Takings Clause.

“This is a law,” says Marquette Law Professor Paul Secunda, “that compels one private party to provide benefits to another private party with no compensation.” He is convinced that right-to-work laws, which permit represented workers to quit their union and stop paying fees while simultaneously obligating that union to continue to spend resources representing them, are an unconstitutional “taking.”

If the issue makes its way up to the Supreme Court, and the justices agree with Secunda, the result could overturn the section of the National Labor Relations Act that allows states to pass right-to-work measures as well as the statutes in all 26 states that have passed them in one fell swoop.

The Wisconsin case won’t get there. Because Wisconsin is in the same 7th Circuit that rejected the “takings” argument in Sweeny v. Pence (making it, for now, a settled matter there), unions filed their case in state court over the state’s constitution.

But West Virginia and Michigan are states that recently passed right-to-work laws, and they are both in different federal court circuits. Unions in those states could challenge the constitutionality of right to work on the federal level. Unions in Idaho already have a case pending, which is a particularly exciting prospect as that state falls within the liberal 9th circuit. (Keep an eye out for Operating Engineers Local 370 v. Wasden.)

The “takings” approach is not without its critics. Seattle University Associate Professor of Law Charlotte Garden notes that Judge Wood’s interpretation of the Takings clause is one more commonly advanced by anti-regulatory conservatives, and that labor taking up the cause could have unintended consequences. “There’s a difficulty of applying existing ‘takings’ law in this kind of context,” she says. “Takings” is generally applied to property, she says, and what’s being taken from unions is the labor of their staff.

As an alternative strategy, Garden points out that the NLRB has indicated an openness to considering whether unions in right-to-work states can charge a fee to non-members who want to file a grievance.

Any rulemaking by the Board on right to work can expect to be challenged by business interests, which could open different constitutional questions about the law. The Indiana unions actually argued in Sweeney v. Pence that the Taft-Hartley amendments to the NLRA were only meant to apply to questions of compelled union membership, not fees for service. But I believe there remains a compelling argument about legislative intent.

Remembering our history will be vital to success

The judges who rejected the “takings” logic in Sweeney vs. Pence argued that unions weren’t uncompensated for their duty to represent all workers in a bargaining unit. They wrote, “we believe the union is justly compensated by federal law’s grant to the Union the right to bargain exclusively with the employer. The reason the Union must represent all employees is that the Union alone gets a seat at the negotiation table.” This is a bunch of ahistorical nonsense that betrays a lack of understanding of labor relations and power dynamics.

But why should we expect a couple of judges to get this right when most union activists are so muddled on the history and effects of the duties of exclusive representation and the union shop? To win, we need to understand our history and have real clarity on our goals to regain power.

When the National Labor Relations Act was written, unions were “members-only” organizations that competed with each other. They contested for power in the same workplaces over who would make the best bargaining demands, who could extract the bigger concessions from management and who could organize the most successful job actions. Employers hated this.

In pursuit of labor peace, employers began signing contracts with unions as the “sole and exclusive representative” of their workers. These early contracts gave employers a one-year guarantee that there would be no new union demands and no strikes. Unions went with it because it helped knock out the competition. The NLRB, which had been certifying unions as representing their members only, also went with it and now certifies unions as exclusive representatives, exclusively.

Agency fee originated not merely as compensation for the financial costs of representing all the workers in a unit, but for the political costs. During World War II, patriotically motivated unions pledged not to strike, and were rewarded with government-dictated wage freezes. Workers protested by quitting their unions. In order to keep unions from dropping their no-strike pledges, the War Labor Board began to reward unions a “maintenance of membership” rule which prevented workers from quitting the union during the term of a contract. This evolved into the union shop and agency fees.

For three quarters of a century the only way that the NLRB would “certify” a union was as the exclusive representative of all of the workers at a represented workplace, mostly with the union’s understanding that it could bargain for a contract clause that obligates represented workers to pay some fair share of the union’s expenses.

This “union certification” gives collective bargaining the force of law that an arm of the federal government—the NLRB—will drag an employer that refuses to recognize and bargain “in good faith” with a certified union to court to force them to. So, for a union to tear up this “certification” to represent all of the workers and say, “we only represent our members now” carries the risk of losing the backing of the NLRB—but the potential reward of forcing the courts to grapple with the tradeoffs of forced representation without taxation.

To win big, we need a union in a right-to-work state that is genuinely willing to cede exclusive representation to kick out the scabs.

What I think this would look like is that union, just prior to the expiration of their current contract, filing a letter with the employer and the labor board disclaiming representation of the entire bargaining unit but demanding to bargain for their members only (and subsequently refusing to bargain over a no strike clause). We’ve got a much stronger case if it’s brought to federal court by an employer complaining that a union won’t represent all the workers than one brought by a union complaining about a loss in agency fee revenue.

It is time to start using the courts more strategically

The idea that the Supreme Court could swing from seriously considering forcing the entire public sector to go right to work in this term, to weighing the very constitutionality of right-to-work laws two or three years later might seem too fantastical, but such is the strange lack of case law over the underlying legal justification for requiring that a union represent all the workers but forbidding them to mandate dues and fees for that service work.

“This isn’t stare decisis at all,” says Paul Secunda, describing the Latin term for the legal obligation of judges to stand by settled decisions. “You’ve got one decision from one circuit court. This is hardly settled case law.”

As I’ve noted, unions have tended to shy away from judicial strategies, and, on right to work in particular, labor has long favored a legislative solution. Repealing the Taft-Hartley Act that contained the right-to-work amendment to our nation’s main labor law was the top legislative priority of the AFL, the CIO and its merged successor from the time of its passage in 1947 well into the 1980s.

There were 12 right-to-work laws on the books—mostly in former slave states—at the time of Taft-Hartley’s passage. They had no force of law, as the federal NLRA preempted them—that is, until Taft-Hartley. And again, a close look at the legislative intent might reveal that Congress merely meant to allow states to ban union membership—not agency fees—as a requirement of employment. Or, more crudely, they may have basically been saying, “Let the Confederacy secede from the New Deal.”

The AFL and the CIO, which by 1947 had both abandoned organizing the south, seemingly wrote the former Confederacy off at the time. Since labor lost little to no membership as a result of those first 12 right-to-work states, little brainpower was devoted to challenging the constitutionality of the scheme. Likewise, when right to work next spread to western and plains states like Arizona and Nebraska, labor similarly wrote them off.

When right to work first spread to a bedrock labor stronghold, Indiana in 1959, the move was so controversial that within eight years labor had managed to overthrow the Republicans, who supported it in all three chambers of government and repeal the law. This win—the only instance of a right-to-work law in a vital blue-collar labor state being repealed legislatively—may have ultimately been counterproductive, giving unions false hope that killing right to work is a matter of making sure the bad guys don’t win re-election.

The labor movement of 1965 could entertain such fantasies. The labor movement that has seen bases of union power in Indiana, Michigan, Wisconsin and West Virginia go “right to work” within the same half decade must wake up to the fact that it will take more than elections to reverse the damage. It will also take a judicial activism agenda for labor, like I have advocated.

And ultimately, working people in America will gain no new rights without stoking a hell of a lot of chaos, through strikes and more. But we’ll also gain no new rights without legal demands like the Operating Engineers Local 370 v. Wasden case hanging out there. It is now up to the sisters and brothers in other “right to work” states—Michigan, West Virginia and beyond—to join the fight.