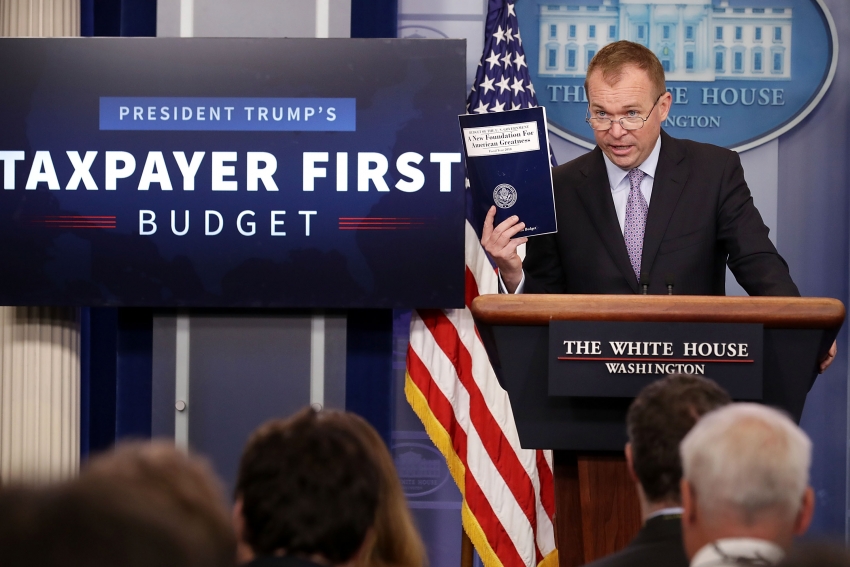 Office of Management and Budget Director Mick Mulvaney holds a news conference to discuss the Trump Administration's proposed FY2017 federal budget in the Brady Press Briefing Room at the White House May 23, 2017 in Washington, DC. (Photo by Chip Somodevilla/Getty Images)

Deficit spending isn’t a sign of moral or economic failure. But looking at the headlines about the Trump administration’s last few weeks of economic policymaking, you might think otherwise.

Referring to Democrats and Republicans both, The Washington Post’s Robert Samuelson bemoans that, “Ever-larger budget deficits have become their means of making policy and practicing politics.” He points to the $1.7 trillion spending agreement reached last week, the $1.4 trillion tax plan passed recently and the White House’s 2019 budget proposal, which—if passed in full (something that basically never happens)—would add $7 trillion to the federal deficit over the next decade.

As John Cassidy at the New Yorker puts it, “the country’s finances will be in a wretched state once the GOP’s recent tax-cut bill is fully enacted.” He laments the “sea of red ink that now stretches into the indefinite future.” We have to “keep the deficit numbers in check,” he says. But Republicans—committed to small government and even smaller budgets—simply aren’t up to the task. The irony!

In the push to condemn Trump, it seems that everyone’s become a deficit hawk, blurring the line between calling out Republican hypocrisy and Democrats’ proclamations that America needs to get its fiscal house in order before slipping irreparably into the red. Yet, the problem with the budget the White House proposed yesterday lies not in the amount of money it proposes to spend—but the programs it aims to cut. The plan would take a sledgehammer to America’s social safety net and public sphere, cutting deeply into Medicare and food stamps while selling off vital national infrastructure. So why are Democrats still fixating on the debt as Republicans abandon the pretense that it ever mattered?

The GOP has been lying about the impacts of the federal deficit for well over 30 years. Despite campaigning against so-called wasteful spending, Republican administrations have reliably driven up huge deficits: Ronald Reagan, George H.W. Bush and Gerald Ford are responsible for the third, fourth and fifth largest debt hikes over the course of an administration, respectively. Today’s breed of deficit hawkishness might most accurately be traced back to budget talks in the mid-1990s, when Republican strategists ingeniously compared the finances of the world’s largest economy with the everyday economic trade-offs of hardworking Americans.

“You simply can’t draw enough parallels to the family budgeting process,” pollster Frank Luntz has advised GOP lawmakers. “It forces voters to evaluate the U.S. budget for what it is, rather than as some abstract governing concept … Keep it simple and force Americans to apply some common-sense kitchen-table economics to the budget process.”

NPR White House correspondent Scott Horsley echoed that refrain on Sunday, arguing that “if you outspend your paychecks a month, you might put the difference on your credit card. The government does the same.”

Americans poring over their monthly bills, of course, don’t enjoy either the power of taxation or access to a sovereign currency. The issue when the federal government deficit-spends money isn’t the amount they spend, but what they spend it on: There’s no finite amount of cash the Treasury is pulling out of a vault. There are also no ominous bill collectors—vigilante Chinese bondholders, for instance—who are going to cross the Pacific Ocean to shake us down for what they’re owed and threaten our sovereignty, no matter which party drives up the bill. Simply put, there’s no inherent reason to worry about the size of the deficit itself.

As former Senate Budget Committee chief economist Stephanie Kelton said recently, Republicans’ outright embrace of deficit spending in this context should be treated as a gift to Democrats. “Take that gift,” she said, “and say, ‘Look, you’re willing to do $1.5 trillion. We’re willing to do $1.5 trillion. But you’re making your check paid to the order of big wealthy corporations and the richest people in this country. Let me show you how we’re going to write our checks for $1.5 trillion.’”

Some push back against Kelton’s line of thinking by arguing that that, while there’s a time and place for deficit spending, an economy that’s close to full employment simply isn’t one of them. “There is no comparable case for deficits now, with the economy near full employment and the Fed raising interest rates to head off potential inflation,” Paul Krugman writes of the budget deal, referencing big spending outlays during the recovery in 2012. “If anything, we should be using this time of relatively full employment to pay down debt, or at least reduce it relative to G.D.P."

But why? A growing deficit has little effect on the macroeconomy, and can be spent on important goods like infrastructure and job creation that would be a sum positive for the public. Markets balked recently over fears of inflation—something which could theoretically rise if the economy truly does become overheated—but there’s little reason to expect it will anytime soon. Common wisdom has held that a so-called “natural rate” of unemployment around 5.5 percent is ideal for warding off inflation, yet the unemployment rate has fallen steadily below that since 2015, with few signs of inflation on the horizon.

Economist Dean Baker, of the Center for Economic and Policy Research, suggests seeing how low unemployment can drop before inflation kicks in, in the process improving the lot of people still struggling to recover from the last recession. While the economy is relatively close to what we call full employment, nearly all the jobs the United States has created since 2005 have been temporary. Wages are only just now starting to rise for the first time in years. If the economy really is moving in the right direction, why stop stimulus spending now?

“The unemployment rate has now been well below [5.5 percent] for more than two-and-a-half years,” Baker writes, “and there is still no evidence of an inflationary spiral. In fact, the inflation rate remains well below the Federal Reserve's 2-percent target.”

Deficit hawkishness has been a Republican con for decades. That a few people were dumb enough to drink the Kool Aid in that time isn’t all that surprising. Take Mick Mulvaney, who is now inexplicably both the head of the Office of Management and Budget and the Consumer Financial Protection Bureau. As a Tea Party Congressman from South Carolina, he pushed to cap spending and balance the federal budget, and arrived to the Trump Administration promising to “restore fiscal sanity.”

Introducing the 2019 budget proposal yesterday, Mulvaney admitted that it wouldn’t amount to a balanced budget, going on to say, “I will always be a deficit hawk … I am today, I was yesterday, I am tomorrow.” But whether Mulvaney, Paul Ryan or other alleged deficit hawks actually believe what they say can be left up to their therapists: What’s relevant is how they actually vote.

For years, cable news channels gave equal time to earth scientists and climate deniers, poisoning the national debate on global warming to disastrous effect. The conversation around the deficit might be even more dire still: Deficit hawkishness—based on a series of fantasies about how modern economies work—has by now become common wisdom, including among otherwise shrewd pundits and politicians. Fearmongering about the debt is its own kind of trap. Doing so in the name of partisan politics is another. With any hope, Democrats will avoid both in crafting their own policies moving forward.