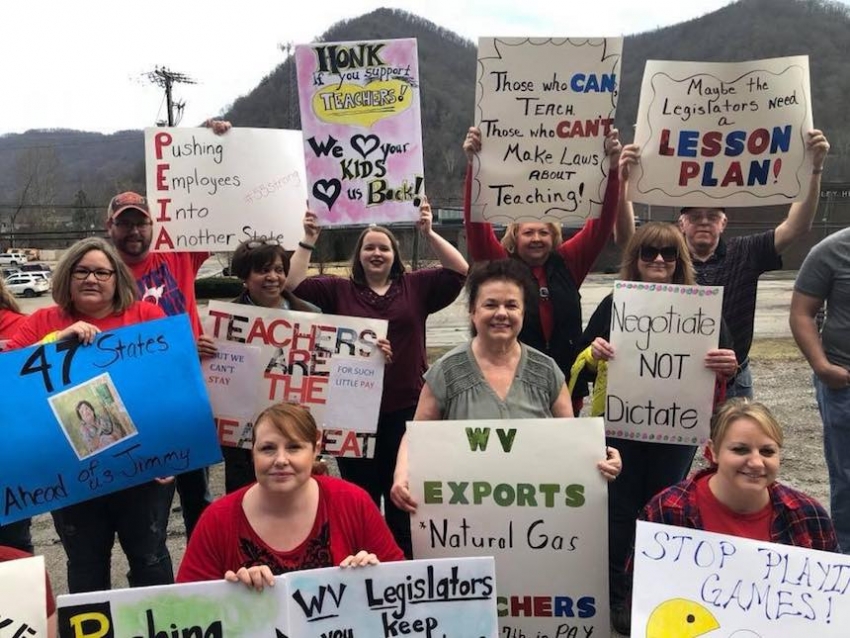 Today’s Worker's Day of Action, organized by AFL-CIO affiliates and labor groups, aimed to show the labor movement’s opposition to a verdict for the plaintiffs in Janus v. AFSCME, which begins oral arguments before the Supreme Court on Monday. Unions fear their power will be diminished if the Court rules against AFSCME, as it is expected to do, and restricts public-sector unions from collecting fees from non-members to pay for collective bargaining. The Right intends to use Janus to gut public employee unions, weakening what is the strongest constituency in organized labor. This in turn will greatly diminish labor’s strength as a progressive force.

Public employee unions are right to be worried, and yet, as today’s demonstrations evidenced, on the eve of oral arguments labor is still grappling with how to protect workers’ rights. The protest’s slogan, “It’s about freedom,” mimics the Right’s own language when it argues that unions shouldn’t be able to collect fees from workers who don’t want to pay. In fact, it's about social justice: The struggle to protect collective bargaining is a fight for the dignity of work and working people.

How then can public employee unions and the labor movement transition from defense to offense, winning economic and political demands? Must a defeat in Janus mean the end of public employee unions? A movement of school employees in West Virginia is providing answers to these questions, showing organized labor how workers can defend their rights without the legal protections that unions rely upon: the right to strike and the right to bargain collectively.

West Virginia bars strikes by public employees and, as a so-called “right to work” state, bans unions from requiring that everyone represented by a bargaining unit become a dues-paying member. Yet, despite this hostile legal environment, school employees, led primarily by teachers, organized walkouts that resulted in closure of schools in every county on Thursday and Friday. School districts could not remain open because school employees had shown they would not come to work. Although officers of the American Federation of Teachers –West Virginia (AFT-WV) and the West Virginia Education Association (WVEA), the state affiliates of the two major teachers unions, are quoted in the press and are widely seen as the movement’s leaders, they are not the force behind the job actions.

As when Detroit teachers organized “sick outs” about appalling conditions in their schools, the West Virginia teachers who took the lead in organizing this movement did so independent of the union apparatus. They invited teachers in both AFT-WV and WVEA, which many activists felt had wasted resources wrangling with one another. As one teacher-leader explained to In These Times, the strategy from the start was “keeping it open.” For this reason, teachers brought in other school employees in  planning actions and demands.

School workers were frustrated and angry about low wages, further diminished by growing health insurance costs. Within months, the movement mushroomed, with the closed Facebook page expanding to 17,000 members. (Although I am not a West Virginia school employee, I was invited to join the closed group because my writing about teacher unionism has informed the organizing. I have commented and posted, making clear that I am a visitor to their site.)

West Virginia is a red state, but one in which union pride and an attunement to class inequality still bubble up. Bernie Sanders won the Democratic primary, and memories of the state’s history of labor battles in the coal fields still resonate. Many teachers in the state identify as workers and with unions, not always the case among teachers.

Understanding this movement’s success requires seeing that the WVEA and AFT-WV, which ostensibly spoke for teachers and other school workers, failed to tap into or build this labor consciousness. Instead of mobilizing actions that addressed anger at poor wages, the unions’ strategy was to court state politicians with donations and votes. As I learned in conversations over the past several months, the activists who built the grassroots movement, many of them socialists, believed that traditional labor tactics, ranging from rallies to walkouts, were essential and that their colleagues throughout the state would respond.

They were right. The movement developed at breathtaking speed. Protests and local walkouts expanded to a state-wide strike and mass protests in the state Capitol. Teachers and school workers confronted legislators who had failed to raise wages while rising healthcare costs cut into teachers’ paychecks. At each step, the movement has made demands on the union and prepared to carry out actions without union endorsement or help. In the process they have gone far in making the union carry out its responsibilities to them—and to public education. A key concern of teachers is that by keeping wages so low, West Virginia has created a teacher “shortage” that it has “solved” by allowing people who have no preparation to teach to become teachers—a strategy being adopted in many other states.

The West Virginia struggle has mirrored the energy of the 2012 Chicago Teachers Union strike, which electrified teachers throughout the world and set a new standard for militant union action in the U.S. But it also resembles what occurred in Madison, Wisc., when public employees, with teachers in the forefront, took their defense of collective bargaining to the state legislature, occupying the seat of power. Labor was badly bruised in that battle because workers did what union officials instructed: They disbanded the protest and channeled power into recalling Gov. Scott Walker. The alternative would have been maintaining the strike while building more public support by expanding their political program beyond collective bargaining, to other economic and political rights that have been attacked.

This same choice confronts the movement in West Virginia. One logical expansion of their political struggle is to demand more progressive funding for schools and a statewide “single payer” health plan to cover medical care for everyone in the state. Public employees who face higher healthcare costs will find natural allies in parents who cannot afford insurance or are worried about cutbacks to Medicaid and Medicare because the fight will be to alleviate health care costs for everyone, rather than only protecting costs for public employees. Such an alliance would join the growing movement within labor for “Medicare for all,” a struggle that requires taking on Democrats who won’t break with their party leadership’s rejection of “single payer” as unrealistic. The demand can also weaken the grip of Republicans who won’t break with the GOP’s—and Trump‘s—refusal to fund healthcare as a human right.

Officers of large public employee unions say that Janus has caused deep introspection and change. While public employee unions are reaching out to “involve,” “engage” and “hear” members, the need for the self-organization of workers is seldom expressed in this narrative of change—except in unions in which reform caucuses have won leadership, like the Massachusetts Teachers Association.

The consciousness and capacity of workers to organize at the work site is what will save labor. West Virginia’s school employees have demonstrated what workers’ power looks like without collective bargaining or the right to strike. Their lesson is clear to the unions: Either fight for the dignity of work and workers or move over and let others show you how it’s done.