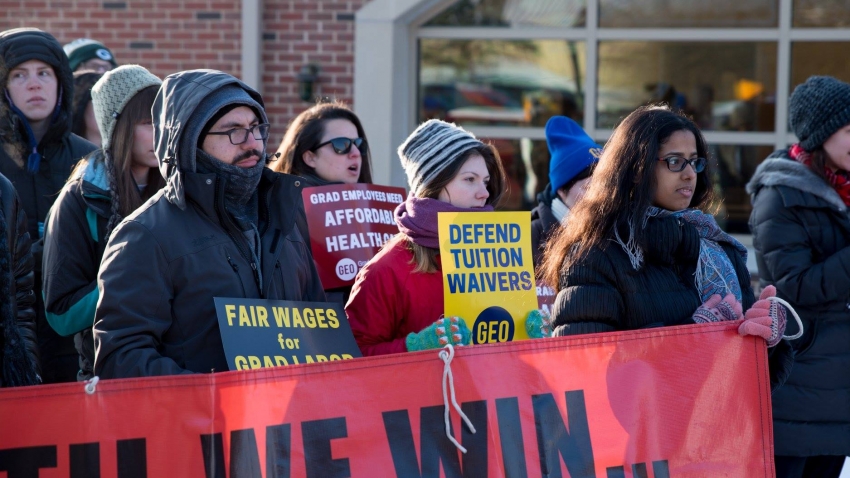 Graduate students at the University of Illinois Urbana-Champaign have been on strike since February 26. (GEO / Facebook)

On February 26, four days after teachers in all 55 West Virginia counties walked out on strike, graduate workers at the University of Illinois Urbana-Champaign (UIUC) followed suit. Filling the leafy quad of Illinois’ flagship state university, hundreds of graduate workers and supporters gathered to protest a plan that the school’s Graduate Employees Union (GEO) argues will turn the university into a “for-profit business, one that leaves poor and working class students out of its storied halls.” As of Tuesday, UIUC grad students remain on strike.

Since March 2017, GEO, which represents around 2,700 graduate and teaching assistants, has been bargaining unsuccessfully with the UIUC administration. At the center of the contract dispute is the issue of tuition waivers. The existing contract states that any graduate employee who works more than 25% of a 40-hour work week for the university is eligible for a tuition waiver, either in full or at a base-rate, which covers only the resident rate of tuition, leaving the student responsible for the remaining cost. The administration wants to roll back this benefit by allowing academic departments to exclude students in their programs from being members of the GEO bargaining unit.

In other words, the administration wants to allow students in some departments to work more than 10 hours a week for the university without assistance from tuition waivers or any of the other benefits afforded under a GEO contract. In a statement, the GEO claims that as a result of this change, "graduate students would be forced to pay up to $30,000 in order to keep a job that pays less than $17,000 per year."

In an email sent to faculty on March 3, Provost Andreas C. Cangellaris explained the administration’s rationale behind the decision: "Our intent ... is to offer those in the GEO bargaining unit tuition waiver protection while restoring the ability of departments, schools and colleges to modify programs in ways that further their educational mission.”

While protecting tuition waivers is a key demand, graduate workers say that the stakes of the strike go far beyond this single issue. Gus Wood, GEO Co-President, says that “this is a fight for the soul of public higher education. Working class and poor students cannot afford to pay twice their salary to continue their studies at U of I.”

On March 2, day four of the strike, GEO introduced an “Education for All” proposal aimed at making graduate education accessible to all students. The comprehensive set of demands includes financial, healthcare and childcare provisions aimed at keeping the doors of the institution open to poor and working class people.

While graduate students form the backbone of the university, striking grad workers say the administration treats them like an expendable workforce. According to Patrick Kimutis, a third-year doctoral student and instructor in the English department, prior to the passage of the Affordable Care Act (ACA), graduate students lacked access to basic coverage for prescriptions and reproductive healthcare. Kimutis fears what would happen to these benefits if the ACA was repealed: “It’s likely we’d lose them.”

Graduate students are also not afforded child care assistance or healthcare coverage for dependents. As a result, the prospect of starting a family, let alone supporting an existing one, is out of reach for many graduate students.

Adam Kozak, a doctoral student and parent of one, knows firsthand the burden of parenting under these conditions. Kozak pays $1,000 total in health insurance for his wife and daughter every semester. “Health care premiums increase but our wages remain stagnant,” Kozak says, “while the administration gives themselves healthy raises every year.”

Such policies carry discriminatory effects along the lines of gender as well as class. A wealth of evidence shows that the absence of child-friendly policies disproportionately affects women, shutting many out of academia entirely.

The UIUC strike is the latest in a recent wave of labor activism among U.S. graduate students. Since the 2016 National Labor Relations Board (NLRB) Columbia University ruling that gave graduate students the right to organize unions at private universities, graduate students at elite colleges such as Columbia, Yale and the University of Chicago have voted to unionize.

But President Trump’s election has thrown a wrench in these efforts. Calculating that with Trump in office the Columbia ruling will be overturned, many university administrations have taken a hard line against unions, stalling bargaining until the NLRB reviews its decision, which could take months. As a result, some graduate students, including the Graduate Students United at the University of Chicago, have withdrawn from the NLRB certification process and are seeking to bargain directly with their university administrations.

An unfavorable NLRB ruling isn’t the only threat facing graduate students. The West Virginia and UIUC strikes coincided with the Supreme Court’s deliberation of Janus v. AFSCME, a case in which the Court’s conservative majority is expected to bar public sector unions (which represent graduate employees at public universities) from collecting “agency fees”—those paid by non-union employees who benefit from collective bargaining. The ruling would effectively institute public-sector right-to-work nationwide, decimating not only the most unionized sector in the country, but one dominated by women and people of color.

The attacks on graduate and public-sector workers are part of a broader nationwide effort by anti-union forces to strip workers of their rights and expand punitive anti-worker legislation. And yet, as the graduate student strike at UIUC and the teacher strike in West Virginia demonstrate, public sector workers are refusing to submit to defeat.

Just as the right-wing conspires to privatize education and dismantle the public sector, we are perhaps beginning to see the outlines for a new working class movement—one that starts in the classroom.