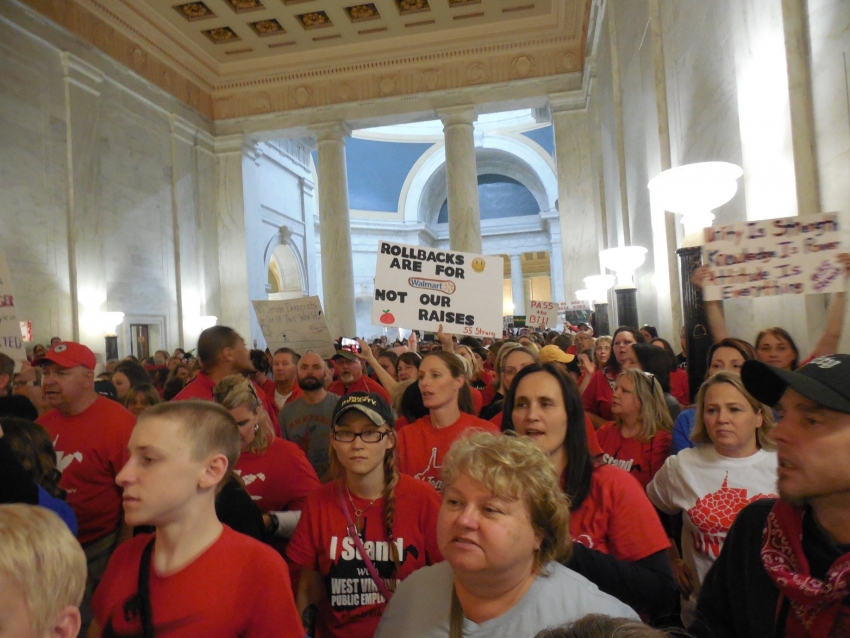 ​Yesterday, West Virginia’s educators produced an incredible lesson plan on power. The timing and outcome of their struggle is epic. Before and during their strike—an unprecedented statewide walkout that shuttered doors to every school in the state’s 55 counties—the national media was writing the obituary of public-service unions, a narrative driven by the oral arguments in the Supreme Court case Janus vs AFSCME. As Trump’s solicitor general bloviated bad things about government workers’ unions, it was day three in West Virginia’s unauthorized, illegal strike in a state that already has the trappings of the laws that the right wing hopes to nationalize in the Janus case (no worker has to pay dues, fair share or agency fees to his or her union).

The West Virginia strike points the way forward for the working class and serves as an urgent memo to the leaders of what’s left of today’s unions. As Adena Barnette, a striking teacher and president of the Jackson County Education Association, told In These Times: “We understand this was a do-or-die moment. If we didn’t do it, there might not be a tomorrow to fix it. If we didn’t do it, we would have failed our kids, our schools and our community.”

While some have opined about what makes the strike unique to West Virginia—focusing on the history of coal and steel-workers and their last-century unions—it behooves us to extract crucial lessons that apply to every state. Those lessons would likely make the same kind of victory well within the power of today’s unions and the broader progressive movement.

Even among progressive journalists, too many people speak about the days in West Virginia when coal miners carried weapons into battle against coal operators. It’s past time for the movement to understand that the power today lies in the heavily female strategic sectors of education and healthcare. After all, roughly 75 percent of West Virginia’s teachers are women.

Schools and hospitals are today’s factories, filled with workers who have the skill and ingenuity of their fathers and grandfathers, as well as extraordinary organic relationships with the broader community. In an era when union membership has plummeted, rebuilding it will require mission-driven workers who are deeply rooted in and trusted by their communities. According to Russ Jordon, a minister at Grandview Christian Church who held a prayer breakfast to support the strike in West Virginia, “The community sees their educators as their leaders. Sometimes their kid’s teacher is the only positive force they have in their lives, and the community supports the strike because they understand this.”

It is no surprise that the largest nurses’ strike in Massachusetts history last summer, led by 1,200 registered nurses who walked out of Tufts University Hospital, preceded the West Virginia teachers’ strike. After Gov. Jim Justice called the teachers “dumb bunnies” in January, women and children armed with bunny-ear hats defeated the men of the state’s power structure within days.

All Workers Fighting as One: The Industrial Model of Trade Unionism

Chris Toney, a school-bus driver from Clear Forks, West Virginia, and president of the Raleigh County School Service Personnel Association, said that before the strike, the school superintendent asked whether the bus drivers, cooks and janitors planned to work on Feb. 22, the first day of the strike. The answer was no. Toney explained to In These Times, “He checked in with me, mainly about the bus operators. If there wasn’t going to be bus operators, he wasn’t going to have children stranded all over the county, waiting for a bus that never comes. That’s a basic safety issue.”

The unity between teachers—and the rest of the school’s workers—was crucial to the fight. According to Brad McElhinny of WV MetroNews, who covered the walkout in depth, the lack of a legal injunction can be attributed to political as well as practical reasons: It’s an election year, and the state attorney general is running for the U.S. Senate. McElhinny told In These Times, “You really can’t open schools in a rural state without being able to get the kids to a school without cooks, so you’d be in a real bind if you tried to force them to open.”

According to Wendy Peters, a teacher and local union president in Raleigh County who works closely with Toney, when the strike votes were taken, “We opened up the voting to all workers, teachers and all other workers. We also invited workers who were not union members to vote because we knew we’d be stronger that way.” The strike votes Peters described were a structure test, a mechanism to assess strike readiness.

Pressure and Power from Below: The Official Union “Leadership” Followed, Rather Than Led

There have been several articles in Jacobin and Dissent telling the story of organic leaders in the rank and file who began to seriously organize back in October. By all accounts, there’s an important swell from below, what teacher-union scholar Lois Weiner calls the “Sanders effect” on the grassroots. She notes that there’s a new generation of teachers fired up from the Sanders campaign: They are young and understand that their workplaces are a key arena for making lasting change.

It is crucial that unions enable—and don’t constrain—the intuition and actions of the rank and file. It is crucial that the most quoted union spokespeople—Christine Campbell from the West Virginia American Federation of Teachers and Dale Lee of the West Virginia Education Association—supported the movement from below. Sure, their rank and file consistently voted with their feet, rejecting the recommendation to return to work after the governor announced a settlement offer. But the leadership could have messed things up a lot. Instead, they listened to the smart educators who we­­re actually leading. Note to elected leadership: do this.