The West Virginia Teachers’ Strike Has Activists Asking: Should We Revive the Wildcat? 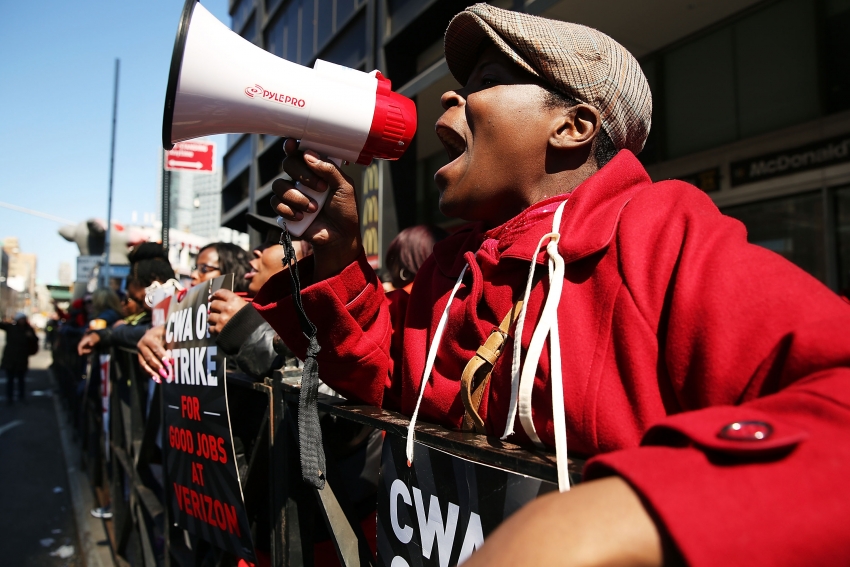 Wildcat strikes are still uncommon in the United States, but we could see more of them after the West Virginia teachers' walkout. (Photo by Spencer Platt/Getty Images)

The stunning success of the recent statewide West Virginia teachers’ strike makes it one of the most inspiring worker protests of the Trump era.

The walkout over rising health insurance costs and stagnant pay began on Feb. 22 and appeared to be settled by Feb. 27 with promises from Gov. Jim Justice of a 5 percent pay raise for teachers. Union leaders initially accepted that deal in good faith, along with vague assurances that the state would work with them on a solution to escalating out-of-pocket costs for workers’ healthcare.

Dramatically, rank-and-file teachers refused to end the walkout. Every public school in the state remained closed for nine days due to the strike, until the West Virginia legislature voted to approve a 5 percent pay increase for all state workers as well as a formal labor-management committee to deal with the healthcare problem.

The entire experience leaves many labor activists asking variations of three questions: What is a wildcat strike? Was West Virginia a true wildcat? And should we have more wildcat strikes?

What is a wildcat strike?

Wildcat strikes are job actions led by rank-and-file members in defiance of official union leadership. Why would leaders try to stop a job action that members want to take? The answer, generally, is that the strike is either against the law or in violation of a contractual no-strike clause (and, often, the leaders are in some way legally compelled to discourage it). In either case, workers who strike could be fired with no legal recourse for the union to win them their jobs back. This is a peculiar feature of America’s post-World War II labor relations system.

Prior to the 1935 National Labor Relations Act (NLRA), a strike was a strike. It was not uncommon to have multiple unions vying for workplace leadership and engaging in a kind of one-upmanship of job actions. While these actions occasionally produced small gains in pay or reductions in hours, they rarely ended with union recognition—much less signed contracts.

That’s because employers didn’t have to deal with unions. They might have begrudgingly made a unilateral concession to the workers’ wage or hour demands in order to resume operations, but bosses almost never formally sat down with elected union representatives.

The NLRA changed that status quo by compelling employers to “bargain in good faith” with any group of union members that demanded it. As Charles J. Morris documents in his 2004 book, The Blue Eagle at Work: Reclaiming Democratic Rights in the American Workplace, the NLRA did not include any provision for certification elections of exclusive union representatives. The framers of the NLRA wrote it for the labor movement that existed at the time: a collection of voluntary associations that made bargaining demands for their members only.

Compelled to bargain with unions, employers quickly developed a preference to deal with only one as an exclusive representative. That way, bosses could have contractual assurance that all outstanding disputes would be settled (or at least channeled through grievance and arbitration procedures) for the period of a contract that also guaranteed no strikes (or lockouts or other forms of industrial actions) would occur during the terms of labor peace.

Under that framework, the wildcat became a unique kind of worker protest. The etymology of the term “wildcat” can probably be traced to the Industrial Workers of the World (IWW) and their unofficial symbol, the sabo cat.

Wildcat actions are not common and are rarely full-blown strikes. More often, they are temporary slowdowns or quick work stoppages in a smaller segment of a wider operation. They could be sparked, for example, over a sudden change in work rules or the belligerent actions of a supervisor. Usually, an official union representative rushes to the scene to attempt to settle the dispute with management and encourages the workers to return to their jobs.

Wildcats were more common in the early 1970s, during the last great strike wave in the United States. Those years saw a large number of strikes by teachers and other public-sector workers to win collective bargaining rights. Many of those strikes were technically illegal, but not wildcats as they were organized and led by official union leadership that had few alternatives in the absence of formal union rights under the NLRA.

However, in that climate of greater worker protest, many private-sector workers also went on strike. Many of those strikes were wildcats sparked by out-of-control inflation and intolerable speed-ups. In a sense, workers weren’t just striking in violation of their collective bargaining agreements but against their terms.

The most famous example was the 1972 rank-and-file rebellion at the General Motors factory in Lordstown, Ohio, which has fascinated generations of labor writers. In her 1975 book All the Livelong Day: The Meaning and Demeaning of Routine Work, Barbara Garson captured this illustrative conversation between workers:

“The only money I want is my union dues back – if they don’t let us out on strike soon.”

In 1972, the factory was churning out Chevy Vegas at a pace that gave each worker 36 seconds to do a minute’s worth of work before the next car moved down the line in the blink of an eye. Workers had taken to acts of sabotage, like throwing a few loose screws in a gas tank, in hopes that the “error” would be caught by quality control and shut the line down for a few minutes of blessed relief.

While the United Autoworkers (UAW) leaders prioritized wages in bargaining—they won an impressive 13 percent increase for their members in the contract that was then in effect—the workers at Lordstown wanted to slow the pace of work. They went on a wildcat strike that lasted for 22 days, until management settled a slew of grievances and agreed to rehire a number of laid off positions in order to reduce the pace of work.

By the end of the decade, the competitive pressures of global trade put workers back on the defensive. The Lordstown plant is still in operation despite multiple threats to shutter it. In a 2010 profile, the New York Times called it one of GM’s “most productive and efficient plants,” and noted that 84 percent of the workers had recently voted to approve concessions during GM’s bankruptcy.

Those competitive pressures, combined with austerity budgets in the public sector, have severely reduced many workers’ living standards. The West Virginia strike may be a sign that these desperate times have turned many workplaces into powder kegs of simmering resentment and desperation.

Was West Virginia a true wildcat?

West Virginia schools have a peculiar framework: no contracts or formal collective bargaining, but a degree of official union recognition—including dues check-off—within a highly litigious tenure and grievance procedure with statewide pay and benefits subject to legislative lobbying. That environment appeared perfectly crafted to sap unions of their potential militancy, assuming the bosses understood they had to provide a minimally-decent standard of pay and benefits. Instead, teachers faced some of the lowest pay rates in the nation, along with rising healthcare costs, which helped lead to their decision to walk off the job.

Because the West Virginia strike happened outside the context of formal, contract-based unionism, Lois Weiner argues in New Politics that it is inaccurate to describe the statewide walkout as a wildcat. “Confusion on nomenclature reflects how remarkable this phenomenon is: we don't know how to name a movement of workers that is self-organized, not confined by the strictures of collective bargaining,” she writes, continuing, “There is no legally prescribed procedure for ending the strike because the vast majority of people striking aren’t union members and strikes are not legal.”

Given the frontal assault on the entire legal framework of union representation—Janus vs. AFSCME being the massive tip of the gargantuan iceberg—what unionism looks like in the United States is bound to be radically altered in the coming years. Weiner does us a service by breaking the union framework down into its component parts. We need more writers doing this if we are going to have an informed debate about which parts are worth fighting to preserve, and which are overdue for replacement.

Respectfully, however, I would argue that the West Virginia strike was a wildcat. The political dynamics were essentially the same as in the ritualized contract bargaining of the post-war private sector. Union leaders were in the position of “bargaining” with the governor over a legislative fix to pay and healthcare. They took a deal that was reasonable enough in order to demonstrate their own reasonableness to the bosses.

When the rank-and-file rejected that settlement by continuing to stay off the job, the strike became a wildcat. Official union leaders continued to represent the interests of the striking workers and helped harness the continued strike into an even bigger win—all while presenting themselves to politicians as the reasonable negotiators who could help them get the teachers back to work.

That the strike happened in the first place is thanks to a good deal of self-organization among segments of the rank-and-file, aided in no small part by e-mail and social media. Because two unions—affiliates of the American Federation of Teachers and the National Education Association—vie for members across the state like pre-NLRA unions used to, this rank-and-file rebellion appears to have whipsawed the competing union leaderships into a one-upmanship over who could more effectively lead the strike and claim credit for the win.

This example does suggest one model for a new unionism, rooted in our recent past.

Should we have more wildcat strikes?

I recently wrote a piece for the Washington Post on the Janus vs. AFSCME case about how agency fees, which are directly challenged in this case, have historically been traded for the no-strike clause. I’ve been making variations of the same point at In These Times for over two years, but this time it’s created a bit of a stir.

Some commentators are beginning to recognize that an anti-union decision in Janus could spark constitutional and workplace chaos that could make messy protests like the West Virginia teachers’ strike a more regular occurrence.

If deprived of agency fees, it is probable that some unions will cede exclusive representation in order to kick out the scabs, or “free riders.” And one wonders how much longer private sector unions in right-to-work states will continue to slog through unfair NLRB elections in order to “win” the obligation to represent free-riders, instead of embracing Charles J. Morris’ theory that the original 1935 process for card check recognition of minority unions is still operational and demanding “members-only” bargaining.

That trend would inevitably lead to new worker organizations rushing to poach the unrepresented workers left behind. Some would likely compete by offering cheaper dues or by cozying up to management. Others would vie for members and shopfloor leadership by railing against disappointing deals. This will be messy. As in the pre-NLRA era, workplace competition between unions may not produce lasting union contracts.

But it will also make a guaranteed period of labor peace impossible—and that could lead to more strikes like the West Virginia wildcat. Through Janus, right-to-work and the renewed open-shop offensive, the bosses have made clear that they’re not interested in labor peace. Let’s give them what they want.