Farmworkers to Wendy’s: No, We Didn’t “Exploit” #MeToo 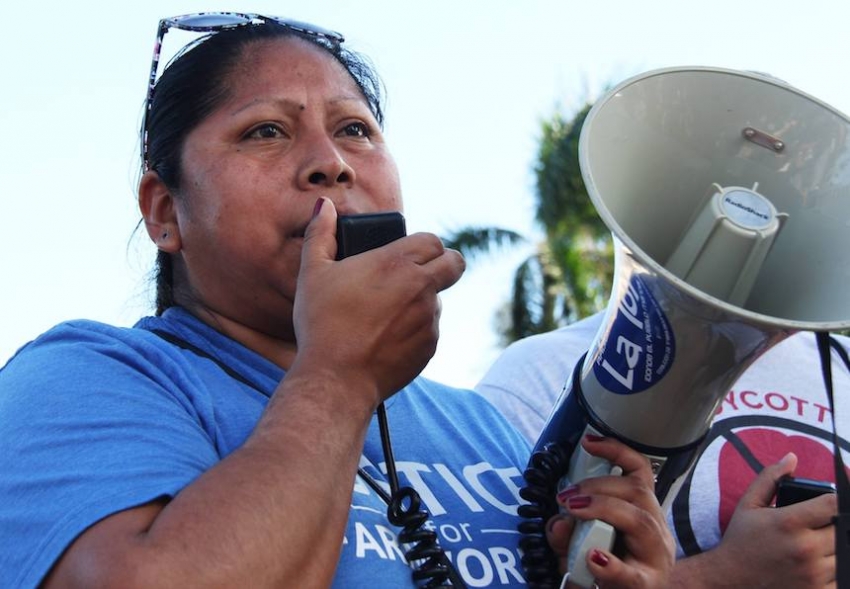 Members of the Coalition of Immokalee Workers (CIW) speak out about working conditions in the growing fields—including sexual harassment—at a December 2017 protest outside a Palm Beach, Calif., Wendy's. (Photograph courtesy of CIW)

Corporate spokesperson Heidi Schauer made the remarks to the Huffington Post in response to a campaign by CIW calling on Wendy’s to adhere to CIW’s Fair Food Program, which is aimed at protecting farmworkers from abuse on the job, including sexual violence. To culminated a five-day “Freedom Fast,” farmworkers and their allies marched through Manhattan on March 15 demanding an end to alleged sexual abuse in the Wendy’s supply chain.

Asked to comment, Schauer told journalist Kari Lydersen, “There’s no new news here, aside from the CIW trying to exploit the positive momentum that has been generated by and for women in the #MeToo and Time’s Up movement to advance their interests.”

Patricia Cipollitti, an organizer with the Alliance for Fair Food, tells In These Times that Schauer’s remarks constitute the company’s first direct response to the latest wave of protests.

Farmworkers responded with incredulity. "Wendy's claim that we are exploiting the positive momentum generated in the #MeToo and #TimesUp movements obscures the 25-plus years the CIW has spent organizing to stop sexual violence and other abuses in the fields,” Nely Rodriguez, a farmworker who has lived in Immokalee for 12 years and organizes with CIW, tells In These Times.

Silvia Perez, a farmworker who has organized with CIW for 17 years, declared in a statement, “We are not only fighting for our community, but also supporting other women who are working to change their own industries and to change society—that is exactly what the #MeToo and #TimesUp movements are. We have fought for decades to protect the dignity of the women and men who harvest our food—and we are winning, through the Fair Food Program. Wendy’s cannot erase the hard-earned progress we’ve made.”

Based in Florida, CIW is comprised of roughly 5,000 farmworker members, mostly from Mexico, Guatemala and Haiti. Initiated more than two decades ago, the organization’s anti-slavery program has freed over 1,200 workers held against their will in agricultural slavery rings, according to the count of CIW, earning the organization the 2015 Presidential Award for Extraordinary Efforts in Combatting Modern Day Slavery.

Women demanding freedom from sexual violence on the job have consistently been on the front lines of its campaigns, according to CIW. In 2005, after a four-year battle, CIW won an agreement with Taco Bell and its corporate parent Yum Brands to ensure that workers growing their food earned a minimum wages and had basic human rights protections. Farmworkers created the Fair Food Program in 2011 as a worker-led model for enforcing protections for some of the most exploited laborers in the United States. The labor agreement includes a trilingual, 24-hour, independently monitored worker-complaint hotline, as well as worker-to-worker education. CIW says that the program plays a vital role in protecting farmworkers from a host of abuses, including sexual assault—which is rampant in the industry.

So far, 14 major buyers—including McDonald’s, Subway and Burger King—have been pressured by workers to sign onto the labor agreement. Despite a two-year boycott targeting the Ohio-based company, Wendy’s remains the only outlier among major fast food chains. The demonstration last week targeted the Manhattan office of Nelson Peltz, the chair of the board of Wendy’s.

“Though Wendy's is the brand, the man with the power to make decisions lurking behind the brand is Nelson Peltz, Wendy's Board Chair,” says Rodriguez. “Farmworker women and our allies fasted for five days outside of Mr. Peltz's Park Avenue offices in New York City last week because we know that the decision to end sexual abuse in Wendy's supply chain lies in his hands."

On April 5, the Student-Farmworker Alliance plans to stage a day of action in solidarity with the CIW to connect sexual assault on U.S. campuses with sexual assault in the Wendy’s supply chain. CIW members are particularly concerned because, in recent years, Wendy’s shifted to buying tomatoes from growers in Mexico, where workers on mega-farms endure severe exploitation and harsh conditions.

That response also caught the ire of prominent members of the #TimesUp movement, including Alyssa Milano, Amy Schumer, Caitriona Balfe and Eve Ensler. Milano wrote in a statement released March 21, “To suggest that farmworker women—whose voices, power, and strength were on impressive display in front of the offices of Wendy's Board Chairman all last week during their Freedom Fast—are somehow unwelcome intruders in the fight for dignity and safety for women is downright absurd and unbelievably offensive.”