Trump Is Making It Harder for Low-Wage Workers to Organize, But This Fast Food Union Could Win 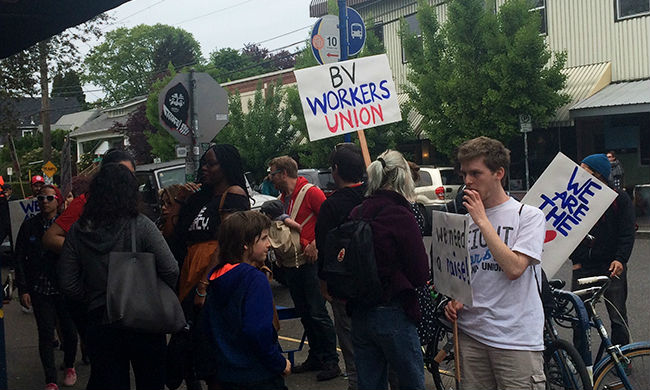 Workers at a Burgerville in Portland, Oregon declared on March 26 that they will file for a federal union election. If union campaigners win, the restaurant will become the first federally recognized fast food union shop in the United States. The local effort, which has a significant chance of victory, offers a powerful antidote to the Trump administration’s aggressive anti-worker agenda.

This move comes after years of worker organizing as part of the Burgerville Workers Union (BVWU), which is an affiliate of the Industrial Workers of the World (IWW). The workers gave Burgerville 48 hours to voluntarily acknowledge the union, which management refused.

BVWU went public in 2016, seeking raises for hourly workers, affordable healthcare, a sustainable workplace and consistent scheduling. In addition to these demands, workers asked Burgerville to stop using the E-Verify system, which they say targets undocumented workers. E-Verify compares employee information with Department of Homeland Security and other federal records to confirm that people can legally work in the United States.

Today, six of the Washington-based company’s 42 stores have publicly active unions, and workers say they’ve been fighting union busting and resistance from management throughout the entire process.

In an interview with the website It’s Going Down, Luis Brennan, an employee at Burgerville’s Portland Airport location, alleged that the company retaliates against organizers by accusing them of minor infractions that wouldn’t otherwise be enforced. He told the story of two Burgerville workers who were recently let go. One of them was allegedly fired for putting a small amount of ice cream in his coffee. The other was allegedly fired for smelling like marijuana. According to Brennan, the latter worker never admitted to smoking marijuana and the company didn’t ask him to take a drug test. The employee, who is black, did have a medical prescription for marijuana because of his epilepsy. “They gave him a week’s suspension and then they fired him,” said Brennan. “He’s an active union supporter, and the combination of racism and anti-unionism in that is pretty transparent to everybody.”

Last year, Jordan Vaandering, a Burgerville-employee who had worked at the store’s Vancouver Plaza location for fourteen months, was allegedly fired for eating a 70-cent bagel without paying for it. Vaandering said a manager gave him the bagel during a paid-break and didn’t ask him for any money. While the bagel was the pretext for Vaandering’s termination, he believes he was let go because he was recruiting co-workers to join the BVWU.

Asked about the alleged retaliations earlier this year, the company released the following statement: “Burgerville does not comment on individual employee matters or internal company policies.”

Earlier this year, in response to management’s refusal to negotiate with the union and its alleged retaliation against organizers, BVWU called on consumers to boycott Burgerville. The boycott call came during a three-day strike that started at the company’s Northeast MLK Boulevard location before spreading to its Southeast Powell and 26th store, two locations in Portland.

Mark Medina, an employee at the Southeast Portland store and a member of BVWU, told In These Times that, while the union campaign has been active for more than 20, now is the perfect time to file for a union election. “It took a lot of work to get where we are right now,” said Medina. “This was all built from the ground up: no money, all volunteers. We’ve had major strikes and many shops, and now we’ll have more leverage during the process. Our level of organization is concrete now. It’s better.”

Burgerville workers’ call for a union election comes on the heels of a potentially major defeat for fast-food workers at the federal level. Trump’s National Labor Relations Board (NLRB) General Counsel Peter Robb recently negotiated a tentative settlement between McDonald’s and the NLRB over a landmark case pushed by the Service Employees International Union (SEIU)-backed Fight for $15 campaign that aimed to hold the company responsible for its individual franchises’ labor violations. The details of the tentative settlement, which is pending approval by an NLRB judge, remain undisclosed. But McDonald’s admits to no wrongdoing, and the settlement allows the company to avoid the “joint employer” designation that would allow groups like Fight for $15 to unionize fast food locations more effectively.

“In a real settlement, McDonald’s would take responsibility for illegally firing and harassing workers fighting to get off food stamps and out of poverty,” said Fight for $15 attorney Micah Wissinger.

“We think a union contract is just one tool to help build the working class we all deserve,” Chris Merkel, who works at the Convention Center Burgervillel, told In These Times, “The NLRB can change all the rules, but we still have to do the work on the floor and in our communities to get our basic needs met.”

Medina said he has “love and affection” for unions like the SEIU and campaigns like Fight for $15. “Fight for $15 is great,” said Medina, “I support raises, but a raise alone doesn’t empower workers to change their own lives and community.”

Despite the fact that the IWW is a rank-and-file union working independently from the bigger labor organizations, Medina said he’s been blown away by the support it has received in Portland. “You see the AFL-CIO at an IWW event,” he explained. “SEIU has turned out. Carpenters 503 has manned our picket lines. We’ve shown we’re here to stay and the community has shown so much support.”

After BVWU announced their call for the election, Burgerville’s Senior VP of Operations Beth Brewer released a statement: “Burgerville respects the right of every employee to support or not support the organization of a union. If there is enough support, we anticipate they will file a petition with the NLRB. Burgerville will abide by the NLRB’s decision and guidance.”

Medina told In These Times that he hopes the Burgerville efforts inspire others throughout the country. “You can organize fast food workers,” he said. “If you put in the effort to organize them, you can. Take what we did and replicate it.”