The Oklahoma Teachers’ Strike Is a Mutiny Against Austerity 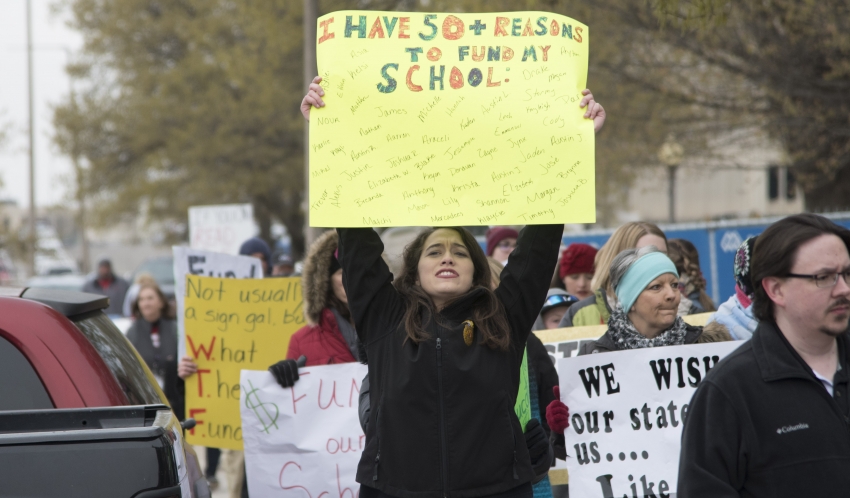 An Oklahoma teacher walks the picket line at the state capitol on April 2, 2018 in Oklahoma City, Oklahoma. (Photo by J Pat Carter/Getty Images)

Oklahoma teachers proudly marked themselves absent from school since Monday, and they had an excellent excuse: They made themselves present in politics instead, with a historic march on the Capitol in hopes of finally capturing the legislature’s undivided attention

Lawmakers thought they could eke through another austerity budget with the last-minute addition of a $6,100 wage hike. But an estimated 30,000 educators stopped work starting Monday to force some 200 schools to shutter, in order to send the message to elected representatives that their gesture is insufficient. The planned raise paled against teachers’ demands for a fully funded school budget, as part of a $3.3 billion package to restore massive cutbacks across state agencies, as well as the basic dignity of a living wage for all state workers.

Following a decade of bruising austerity, the numbers still don't add up for Oklahoma schools. They lead the nation in annual budget cuts, and rank 45th in funding equity levels and 46th in academic performance, according to recent national rankings. With pay scales for teachers statewide frozen since the recession, salaries have declined in real terms to rank near dead last in the country.

Cathy Benge, a library media specialist at Longfellow Middle School in Enid, calculates the average age of a book in her library’s collection is 40, while many textbooks are 10 to 12 years old. This leaves her middle schoolers with crumbling textbooks about as old as they are. “Our services are being cut to the core,” she said.

As a 15-year veteran educator and a parent of three herself, Benge notes that, while teachers appreciate the short-term bonus, they'll accept nothing less than real long-term security, including parallel raises for school staff and cost-of-living adjustments for pensions. And fundamentally, their rebellion isn’t about wages, but respect for themselves and the young people they educate. “We are walking to advocate for our students,” she says. “Our students are being robbed of a properly funded education.”

Even with the proposed pay hike, teachers’ salaries are still devastatingly low, despite being years into the economic “recovery.” With the 15 to 18 percent salary boost offered by state lawmakers, a typical teacher’s pay would reach the $40,000 tier only after eight years. That still trails the estimated annual living-wage income for a family of four with one working parent in Tulsa County, according to the MIT living-wage calculator. By comparison, workers in the construction and extractive industries often earn about the same amount. But while school budgets have bled nearly $200 million since 2009, the fossil-fuel industry receives special protections and subsidies, including rock-bottom tax rates.

The state’s austerity axe delivers daily punishment to a struggling student population: The proportion of special needs and English-language-learner children has soared in Oklahoma in recent years, according to the OEA, and the majority of kids are so impoverished they need subsidized lunches.

Not even educators like Rae Lovelace are spared. "If I didn't have a second job, I'd be on food stamps” she told CBS at the Capitol. To cover her family’s basic needs, the English teacher splits her class time between third graders at her northwest Oklahoma school and the distance-learning students of an online charter school. The state’s extraordinarily high teacher turnover rate shows that many are opting to leave their job to for higher-paying sectors or teaching jobs in other states.

Benge witnesses this grim civics lesson playing out locally in her small city of Enid. Her library’s budget, after shrinking for several years, was just zeroed out. Understaffing in paraprofessional support staff across the public school system, she adds, leaves teachers overwhelmed with classes often exceeding 30 students. And the students are coming from households facing parallel deficits in welfare and healthcare supports, due to state's massive divestment from family social services, on top of education cuts.

No wonder many other civil servants rallied in solidarity with this over-stressed, mostly woman public workforce. Schools are on the front lines of so many overlapping unmet needs, Benge explained. “If [children] have trauma going on in their lives at  home, and [Department of Human Services] doesn't have enough case workers or foster care to help them out,” she said, “then they're not in place where they're prepared to learn the next day.”

Noting that her colleagues have stretched their paychecks to buy students the shoes or eyeglasses they otherwise could not afford, Benge says, “I cannot in good conscience sit and not do anything. Do I have to feed them? No, I don't, but I can't not.”

Lawmakers should have seen the revolt coming. Weeks ago the OEA published online polling results showing that if the state failed to provide living wages and full funding “for education and core government services,” organized school closures and mass walkouts to the Capitol would be supported by overwhelming majorities of teachers, students and parents.

The Oklahoma rebellion caps a wave of mass mobilizations in the past few weeks, including similar wildcat actions in West Virginia and, more recently, Kentucky, with potential strikes brewing in Arizona. The uprisings evoke a decades-old tradition of teachers' labor militancy. Yet the latest eruptions signify a bold new anti-austerity resistance, fueled by an undercurrent of simmering left-wing backlash in Trump Country.

Weak union power and overarching right-to-work policies in Republican-dominated Oklahoma mean any mass political action carries risks, especially given the sensitive nature of schools’ role in the community. Teachers’ strikes are essentially “wildcat” in Red States like West Virginia and Oklahoma, where educators are legally restricted from striking and have anemic union protections. The political constraints on workers’ collective actions—which may presage the gutting of public-sector union protections in the upcoming Janus Supreme Court case—could have a radicalizing impact. When the rules can’t contain them, teachers have no choice but to write their own, including grassroots work stoppages.

Meanwhile, some teachers are even schooling political elites: A major progressive surge in last September’s special election launched Oklahoma educator Jacob Rosecrants from the classroom to the State House in a key swing seat.

“A lot of teachers and educators that I listened to today feel like we are being pacified, or patronized, or placated—any of those wonderful 'P' words,” said Benge. “They're patting us on the heads and saying, ‘Okay, here you go. Now be happy and go away.”

But unlike many legislators who budget year-to-year with a cynical eye toward voting cycles, Benge takes the long view on educational investment. “The students that have these gaps in their education, it's going to take a long time to fill those gaps, if we're fortunate enough to make it up,” she says. “They haven't been in school ever in Oklahoma with a fully funded education program.”

In this year's budget battle, Benge adds, "The pay raise is much appreciated, but it is one block of accomplishment in a marathon of problems.” The rallies at the Capitol this week just mark one step in teachers' long march toward equity.