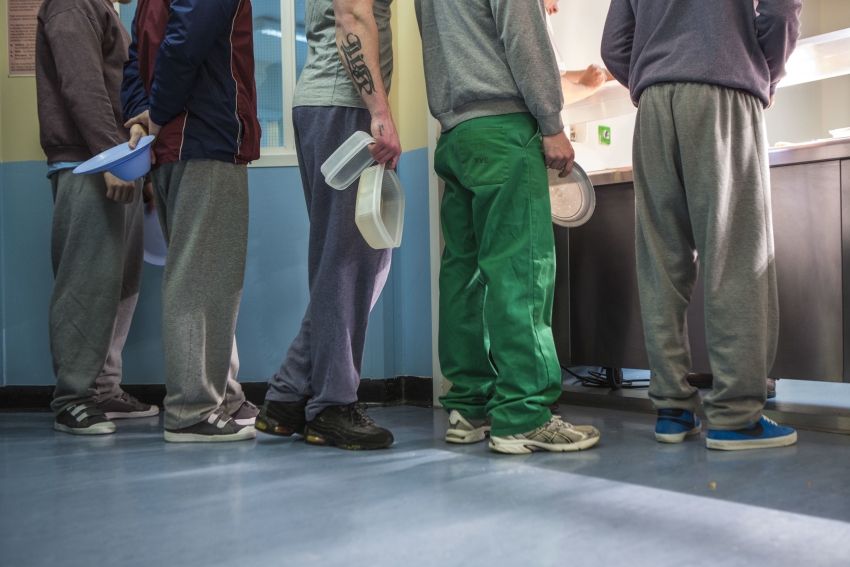 A new study looking into prison conditions nationwide shines light on the bleak reality of everyday life behind bars. (Photo by In Pictures Ltd./Corbis via Getty Images)

We rarely see what goes on inside of U.S. prisons, besides the occasional reports of riots, suicides or corruption scandals that trickle out of an otherwise opaque institution. But a new study looking into prison conditions nationwide shines light on the bleak reality of everyday life behind bars.

The study, conducted by the Incarcerated Workers Organizing Committee (IWOC)—an affiliate of the Industrial Workers of the World and Research Action Cooperative—surveyed 123 incarcerated individuals across 21 states. The majority of the participants were from state facilities, but also included prisoners from federal institutions and immigrant detention centers, mostly from Missouri, Texas and California.

The study found that day-to-day life inside of these prisons can be grim, marked by harsh, often borderline inhumane conditions in the provision of food and healthcare, causing inmates both hunger and illness.

“Not for human consumption”

In the voluntary survey, seven in ten respondents described poor-quality food, often with only occasional servings of fresh vegetables or fruit. Reports of spoiled and foul food were rampant: Some inmates claimed they spotted “bugs or rocks” in their meals, were provided food that was years past the expiration date, or identified “food containers... labeled not fit for human consumption.” Nearly two-thirds of respondents reported that, over the past year, they had been sickened by prison food, suffering ailments including diarrhea and food poisoning.

In Missouri, one prisoner observed dirty facilities that were lacking basic cleaning supplies, with “rats and roaches in the kitchen” and warehouse. A separate prisoner described a bag labeled “animal consumption only” while another spotted sacks of hot cereal labeled “not for human consumption” displaying “the picture of the head of a horse.”

At a Texas Supermax facility, one respondent described the rolling food serving carts that delivered rations to single cells as “a breeding repository for cockroaches,” with filthy trays of meager, foul-smelling or “rotten” rations that left some prisoners going hungry or becoming sick.

The report also described prisoners being fed the infamous “food loaf”—a mysterious concoction of “meat and vegetables thrown in cornbread-mix” served in fist-sized baked bricks. One Texas prisoner claimed that the loaf is used as a form of nutritive punishment for inmates who were known to be disobedient. Some respondents reported that prisoners would even request solitary confinement rather than being forced to eat the bricks.

Other prisoners said they were systematically deprived of food. About eight in ten surveyed were “denied meals or given too little food in the last year,” sometimes punitively or out of prison management’s cost concerns. One Texas prisoner explained: “Daily portions are smaller due to Captain’s orders saving money.” Another in Missouri said inmates had two minutes “to exit the wing for chow. If you are later than 2 mins no chow!”’

Although around half of respondents reported special dietary needs, two-thirds said their requests had been rejected. Vegan or vegetarian dietary rules were ignored while others were denied religious accommodations, such as halal diets—with bureaucratic obstacles such as being “told to resubmit the paperwork” just to receive the appropriate diet. One Texas prisoner claimed that in response to complaints, “they tell us not to eat it and keep serving it to other inmates. The food has sent me to the free world hospital twice!!”

Of course, free-world hospitals are a luxury that incarcerated people are rarely afforded. The survey also depicted a chronically substandard state of in-prison health services.

A respondent in Alabama recounted deliberate denial of care for a blood pressure problem: “I told them I was having problems seeing and it felt like my blood pressure was to high. I showed them under my eyes and how black my left eye had turned, also my feet and legs were swollen. They told me to go back to my dorm that was last July.”

Others reported denial of routine treatments, such as flu medication, an MRI for arthritis or fingers gone crooked from an untreated injury. Several reported a lack of appropriate care for Hepatitis C, including a California inmate being told “It cost to much and I aint sick enough.’”

The study also highlights a growing nationwide trend of correctional service privatization. Outsourcing services such as food provision and medical care to commercial contractors has become a standard way for prisons to shift management of incarceration to the private sector and effectively deregulate public services, ranging from maintenance and security staff to full-scale facilities management.

There is typically little public transparency in commercial contracting arrangements, and even more so for the prisoners subjected to them. Although the exact extent of privatization was unclear from the survey, most respondents did not know who was supplying their food. About a sixth identified Aramark as their prison’s food service provider. Aramark, one of the major players in the industry, is notorious for abuse and dysfunctional management. Michigan, for example, recently moved to cancel partnerships with Aramark and another large contractor, Trinity, following reports of “food shortages,” unsanitary conditions, “smuggling” and maltreatment by staff.

Across state and federal prison systems, including immigration detention, privatization of services and management has been linked to patterns of abuse, massive waste and chronic recidivism. Although most state and federal prisoners are held in government-owned facilities, private contracting fuels every facet of the carceral state, from drug treatment to inmate phone services. Incompetent or overly costly services often aggravate the stressors that feed mass incarceration. For many inmates, the high costs of family phone calls and visitation destabilize social networks they need to prevent recidivism following their release. And the sheer profit motive of perpetuating the punishment industry drives the harsh criminal justice policies that promote mass incarceration.

In the short term, the report's authors recommend “true investment in positive rehabilitation” that “would provide quality food and health care that values prisoners’ lives.” Longer term, the IWOC advocates mass decarceration and, ultimately, prison abolition. For the hundreds of thousands of Americans streaming through jails, detention centers and prisons each year, however, effectively challenging the system of mass incarceration will come down to generating organized grassroots pressure from all sides.

According to Brianna Peril, an organizer with the IWOC, in mass prisoner uprisings such as the recent wave of hunger and labor strikes in state and private facilities, “We have seen positive changes occur when prisoners can overcome their differences and work together toward common goals.” But with incarceration embedded in the nation’s social infrastructure, “It is going to take all of us, inside the prisons and out, working together to create a world where prisons are not needed so that we may prevent the abusive act of locking humans in cages first, and thereby prevent the abuse and torture that naturally arise as a result.”

Such dire prison conditions beg the question: How sick is “sick enough” to compel systemic change? The report illuminates the depth of brutality that is entrenched in the criminal justice system, and the extent to which the oppressive climate of prison life is simply seen as banal and appropriate for maintaining “law and order.” For the imprisoned—the nation’s most institutionalized population, and its most disenfranchised—the silent indignities of daily life behind bars never seems quite “sick enough” to alarm society's collective conscience; it's just punishment taking its course.