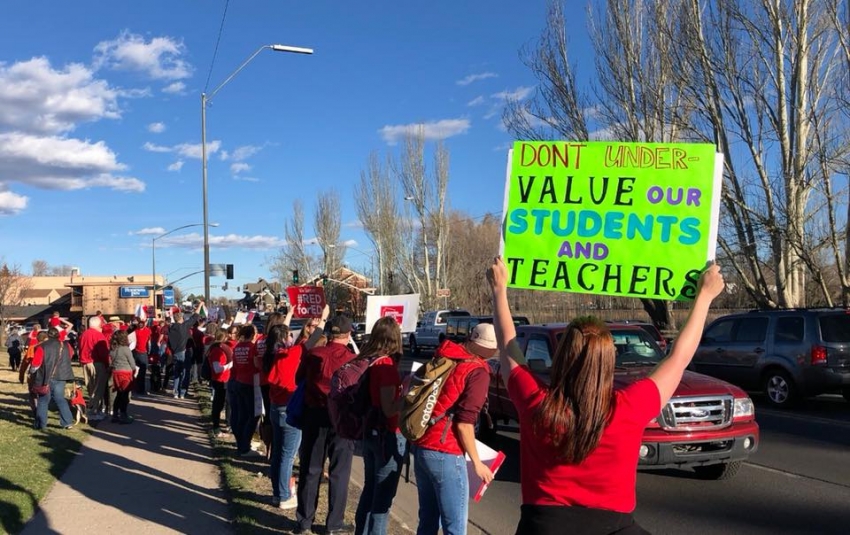 Arizona teachers are mobilizing against massive cuts to education. (Save Our Schools Arizona/Facebook)

​Welcome to Interviews for Resistance. We’re now into the second year of the Trump administration, and the last year has been filled with ups and downs, important victories, successful holding campaigns and painful defeats. We’ve learned a lot, but there is always more to learn, more to be done. In this now-weekly series, we talk with organizers, agitators and educators, not only about how to resist, but how to build a better world.

Noah Karvelis: My name is Noah Karvelis. I am a kindergarten through 8th grade music teacher in Phoenix, and I am also one of the organizers with Arizona Educators United.

Sarah Jaffe: The strike deadline is for Thursday. Let’s go back a little bit. Tell me about the beginning of the movement that has led to this strike vote.

Noah: This all really started from just one day wearing red shirts on the same day. That was March 7. We started there and we realized that there was a ton of energy surrounding this around the education community and the community at large, here in Phoenix and all across the state. What we ultimately did was decide that we needed to get together and continue moving this forward. And now this is where we are six or seven weeks after.

Sarah: Tell us about the issues in Arizona. People are familiar with the underfunding of public schools writ large, but what are the specifics in Arizona that people are really upset about?

Noah: We have had just massive cuts to education. We’ve had billion-dollar cuts to education that have continued on for years and years, about 10 years now. That is one of the most frustrating things that affect all aspects of our schools.

A lot of our kids here in Arizona don’t have textbooks that they need to be successful. They stop at President George W. Bush, for example. They don’t have working desks, and a lot of the classes don’t have paper towels and just the bare necessities that you need for a classroom.

What is happening is we have an entire generation of Arizona citizens who haven’t been given a chance at academic success. Any chance that they had of academic success has been thrown away by the state, which is incredibly maddening, especially as an educator.

Then, on top of that, we have the worst pay in the nation for elementary school teachers, and we have the second-to-worst pay in the nation for high school teachers.What we really have is an education crisis because our students don’t have the resources that they need to be successful, our teachers don’t have the resources they need to be successful or to even stay in the job, and our public-school infrastructure is crumbling on top of it and we are hemorrhaging teachers.

Sarah: What has been really interesting about these various teacher movements has been the statewide nature of them. Can you tell us a little bit about organizing across the state of Arizona? What are some of the challenges and the things that have worked out surprisingly well about that whole process?

Noah: One of the things that has worked out surprisingly well is that we have social media, which really keeps us in the loop and is a powerful, powerful organizing tool, especially on a large scale like this. A lot of the state is rural, a lot of the state is Native American reservations. So having those resources to be able to get in touch with people all across the state has proved to be vital. That has really helped us stay in the loop and keep people involved and everybody across the state is really fed up with this situation. So they are ready to go as soon as you get them plugged in, for the most part. Once we have been able to contact them and bring them in, we have been successful. It has been challenging at times, but as the movement has grown, it has really been a successful thing.

Sarah:Arizona Educators United. Tell me about that. How long has that been an organization? How did that get started?

Noah: It is really not an organization. It has become an organization now, but in truth, it is a Facebook group that started around the start of March, the first couple days of March. It was started by myself and a couple other educators who said, “We have got to get organized. We have got to figure out what we are doing here and how we are going to make a change, and somebody needs to bring that change. Let’s start a group and let’s see what happens.” Now, here we are.

Sarah: What has the relationship been between the Facebook page and the existing unions?

Noah: It has been fantastic. The unions really let the Facebook page on Educators United and the leaders there stay out in front of this thing and keep driving it forward. I think that has been the power of it. It is a grassroots, educator-led movement, and the union has been incredibly respectful of that. They realize that there is a lot of power in that, and they let us stay in that spot.

But, while we do that, they are offering us a ton—I mean, decades and decades of resources and insight and infrastructure. Anything we really need, they lent to us and they let us stay at the forefront of the decisions and the charge here. It has proven to be a really powerful partnership, especially in a “right-to-work” state.

Sarah:Exactly. And Arizona, besides just being a right-to-work state, has had some attacks on public sector unions in recent years, as well. It has been an interesting late winter and early spring for teachers. What was it like watching things start to heat up in West Virginia and then being part of this as it spread across the country?

Noah:It is incredibly empowering to see that, to see what happened in West Virginia, especially with the results. They stood together, they stood in solidarity, and they brought the change that they needed. That is incredibly powerful to see, and I think every teacher around the nation looked up and looked at their classroom and said, “Hey, that could be us. Why can’t it be us right now? We deserve better, as well.”

That is what happened in Arizona, and it has been incredible to be involved in that in even a small way. It is an incredible, incredible thing that has happened across this state and, as you mentioned, across this nation. It really is a nationwide movement now and so, it has been empowering to be a part of that and to see that there really is power in the people.

Sarah: The Governor of Arizona has already made noises about, finally, getting teachers a raise, but you took a strike vote anyway. Tell us about both what you heard from the governor and why continue to consider a strike?

Noah: Well, first of all, the governor hasn’t passed anything. This isn’t legislation. It is basically just a flyer with some goals on it right now. That is what he has put forth. That is beyond the consideration of what is actually in the proposal. What is in the proposal is problematic as well. There is no sustainable funding source. So, we are really only looking at a one-time thing here, and we are beyond Band-Aids like that. We are in a state of crisis. We are hemorrhaging teachers. We don’t have proper infrastructure. We don’t have proper resources. We can’t just have a one-time 9 percent raise. That doesn’t fix the problem.

It doesn’t do enough for our kids and colleagues, and that is the bottom line. On top of it, without that revenue source, we can’t continually bring money into our system. That is a huge problem for us. The raises that he has proposed don’t touch our demand of 20 percent. He says that he’ll get there, but, again, without those sustainable funding sources, it is an empty promise.

And, there is nothing in it for our students. It is not going to increase or move the needle on our funding. It doesn’t do enough for our kids and colleagues, and it doesn’t have a sustainable funding source. Right now, it is just words on paper. There is no legislation. So, we pursued it and we have continued to escalate our actions because we need change.

Sarah: Talk about what a sustainable funding source would be.

Noah: You can look at other states that have done similar things here. There have been sales taxes, income taxes, all sorts of different things have been proposed. I personally have issues with a sales tax, because it is a regressive tax and it disproportionately affects the communities we are fighting for—like working-class folks, like teachers and our students and a lot of our families. So, I do have some issues personally with that, but it is certainly better than a one-time raise which he has proposed right now. We can look at the example of other states. One thing that makes a lot of sense to be personally is the income tax where we have corporations and millionaires pay their fair share.

Sarah: What else should people know about what is going on in Arizona, both as part of the nationwide movement and what is specific to Arizona?

The other piece that I think is really important is that our students are at the forefront of it. A 20 percent raise gets a lot of eyes opened, it gets a lot of focus, but that is not what we are really fighting for. We are fighting for our students. That is one of the reasons why we rejected this proposal. It doesn’t do enough for our students and it doesn’t do enough for our colleagues who are left out of those raises. That is one of the big things that is unique to Arizona: the student focus and the focus on the entire school. It is not just classroom teachers. We need to see raises for bus drivers, we need to see raises for the cafeteria staff, we need to see raises for the people who are working in the front office. All across the board, these people are incredibly underpaid in Arizona and they deserve a voice, as well.

Interviews for Resistance is a project of Sarah Jaffe, with assistance from Laura Feuillebois and support from the Nation Institute. It is also available as a podcaston iTunes. Not to be reprinted without permission.