In a National May Day Strike, Puerto Rican Marchers Face Down Tear Gas To Protest Privatization 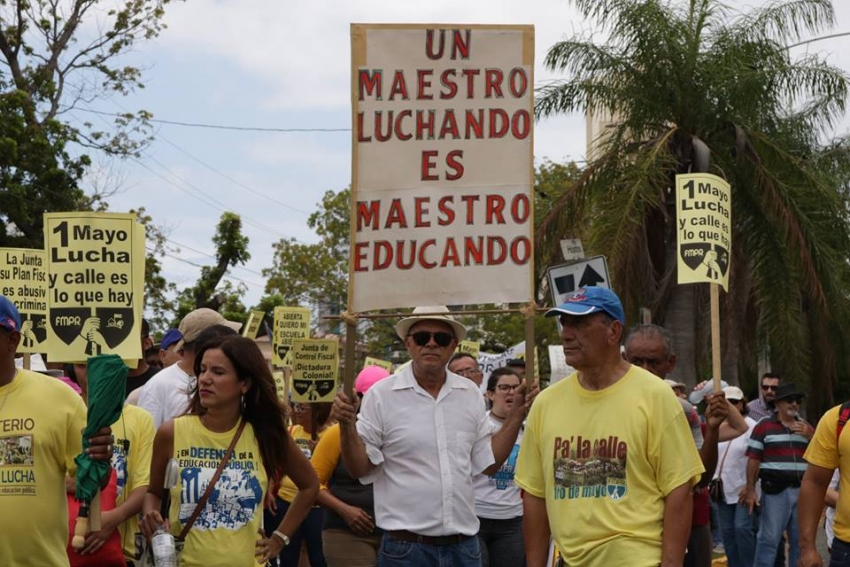 Strikers took the opportunity to bring their fights to their opponents’ doorsteps. (Bryant Martinez)

Pushing back against a slew of austerity measures being unveiled by the Washington-appointed Fiscal Oversight and Management Board (FOMB) and Puerto Rico’s ruling New Progressive Party, strikers took the opportunity to bring their fights to their opponents’ doorsteps, rallying throughout the day at their offices in locations scattered throughout the city.

By the end of the day, police were firing off several rounds of tear gas and wrestling students to the ground.

Striking teachers from around the island began Tuesday outside the Department of Education. Just a few days earlier, several of those same teachers had been pepper sprayed during another demonstration against the fiscal control board’s plan to close 283 public schools on the island and replace them with charter schools that likely won’t be subject to regulatory oversight. That education plan was one of a rash of new proposals released by the board (colloquially known as “la junta”) just a day before certifying them in mid-April, which together lay out dramatic transformations for everything from labor law to energy.

“It’s a colonial situation that we are facing,” Mercedes Martinez, president of the Teachers Federation of Puerto Rico (FMPR is the Spanish acronym), tells me. “The fiscal oversight board are the ones telling the governor what to do. If he was somebody else he would say no. They are not here for the people, they are here for themselves.” In addition to school closures and charterization of the island’s school system, FMPR is also fighting proposed cuts to public sector pensions, which the board has suggested should be cut by 25 percent.

Inspired by opposition to those plans and, in part, by striking teachers in Oklahoma, West Virginia, and Kentucky, FMPR voted in an assembly several weeks ago to strike on May 1. (At that point, Arizona’s walkouts had not yet happened.)

So under a blazing sun Tuesday, union members in the education bloc wore different colors to denote their respective affiliations. FMPR wore yellow, and many members hoisted matching yellow signs denouncing the fiscal plans as “abusive and criminal,” and the board itself as a colonial body. As the location of Tuesday’s demonstration might suggest, one of the main targets — for teachers and demonstrators more generally — was Puerto Rico’s controversial education secretary Julia Keleher, tapped by Gov. Ricardo Rosselló for her record as a Bush-era Department of Education staffer turned education consultant.

The month after Hurricane Maria hit Puerto Rico, Keleher tweeted that Puerto Rico should look to the transformation of New Orleans’ school system after Hurricane Katrina as a model. After that storm, New Orleans public schools were rapidly privatized, in many cases while students still resided in other states waiting for their homes and communities to be rebuilt. Since that time, Keleher supported policies that seem to be moving the island further in that direction — including the fiscal control board’s — and received hearty financial and advisory backing from U.S. Secretary of Education Betsy DeVos. Many of today’s demonstrators also took issue with the gap between Keleher’s $250,000 salaryand the teachers’ own salaries. Puerto Rican teachers make the least on average of any of their counterparts in other U.S. states and territories, just $33,952 per year.

One of the day’s more colorful signs, a banner around 12 feet tall, featured a fake mug shot of Keleher at the top above the Spanish word for “surplus.” Several members the teachers’ bloc posed for pictures in front of the sign.

“She’s no good,” retired science teacher Juan Santos said. “She’s not doing anything for education, or listening to anyone. She’s waging a revolution against the people.”

Nearly everyone I spoke with agreed that the administration officials and the board had both taken advantage of the storm’s devastation. “She didn’t come here for education. She came here for her own benefit,” another retired teacher, Tony Latallodi, said of Keleher. “Her background isn’t in education. It’s in business. All she knows about is money-making. It’s like me — an educator — running a hospital. The only place to learn about education is in the classroom.”

“We’re fighting for our rights as teachers. Our rights are being violated in ways you cannot imagine,” added Latallodi, who lives in the southeastern town of Patillas.

While the convergence of marches from each part of the city resolved in a kind of festival of speeches and music from the main stage, the latter half of the day took a more chaotic turn.

After many marchers had dispersed, a contingent comprised of students from the University of Puerto Rico and several others were hoping to march to the center of Milla De Ora, only to be stopped by police. At some point marchers believed a settlement had been reached whereby police would let them pass, but no such thing happened. Demonstrators pressed on in a tense confrontation, attempting to push through police lines to their destination. Within minutes police fired several rounds of tear gas into the crowd, sending not just students but children and elderly people running to escape the fumes. At least 100 police, some in SWAT gear and others in military-like garb, proceeded to push crowds south toward the University of Puerto Rico (PR), periodically firing off new rounds of tear gas and marching forward.

Soon after, police entered off-campus student housing, pulling out and arresting people from behind fences. The interaction was particularly charged given the history of San Juan police and the university. After UPR student Antonia Martínez Lagares was shot and killed by police during an anti-war demonstration in 1970, officers are not permitted to enter the campus.

Among those arrested in that same Rio Piedras neighborhood was Luis Rodriguez Sánchez, the head of Proyecto de Apoyo Mutuo Mariana, which provided food and solar power in Mariana after the storm. According to illustrator and journalist Molly Crabapple — who’s been writing about Sánchez’s mutual aid project for the last several months — the reason given for his arrest was “expired plates,” although several people versed in Puerto Rican politics speculated that the police were targeting well-known organizers.

At a press conference Tuesday night, Gov. Rosselló denounced violence on the part of protesters, which consisted at its most aggressive of throwing rocks and lighting bags of trash on fire in the street. “This kind of violence,” he said, holding up a rock, “damages the good name of Puerto Rico.”

Late Tuesday night, Martinez posted on Facebook that 22 students — who were protesting massive tuition hikes and other deep cuts to the UPR system — had been arrested.

“Today was a militant May 1st, International Workers Day. Thousands of teachers and workers on the streets of Puerto Rico,” she wrote. “Repression by the government was brutal. Roads were obstructed by police officers, students were pepper sprayed, tear gas thrown, tasers, ‘balas de goma’, police chasing students to their dorms and arresting them.”