Elon Musk Is as Obsessed with Fake News as Donald Trump 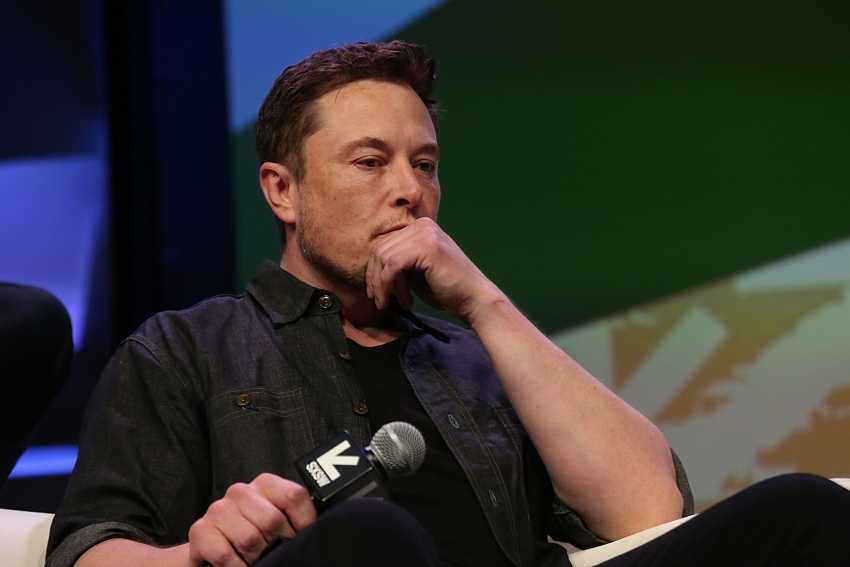 Musk's attacks on the media and workers’ rights show that he has a whole lot in common with President Trump. (Photo by FilmMagic/FilmMagic for HBO)

Facing mounting criticism over various parts of his electric car manufacturing business, Tesla CEO Elon Musk on Wednesday floated the possibility of creating a website for the public to “rate the core truth of any article,” and track the “credibility score” for journalists, editors and publications. “Thinking of calling it Pravda,” he tweeted, potentially a reference to the identically-named former Soviet Russian state newspaper.

In the same tweet storm, Musk intoned that journalists who criticize him and his companies are on the payroll of the fossil fuel industry and claimed that the media’s dishonesty is why Donald Trump won the presidential election. “The holier-than-thou hypocrisy of big media companies who lay claim to the truth, but publish only enough to sugarcoat the lie, is why the public no longer respects them,” Musk tweeted. Donald Trump Jr. responded approvingly, tweeting “This is so true!”

It’s never clear which of Musk’s social media spitballed company ideas he intends to follow through on. He also recently tossed around the idea of starting a candy company that doesn’t seem likely to materialize, but his lawyers appear to have filed paperwork incorporating a company named Pravda Corp. last year in California.

While Musk generally enjoys fawning treatment by some self-described progressives, his targeting of the fourth estate smacks of authoritarianism. And his criticism of the media—and just about anyone who questions his and his companies’ behavior—has gotten increasingly Trump-like over the last few weeks.

On a quarterly earnings call in early May, Musk lashed out at analysts participating on behalf of Tesla investors. Asked to clarify what sort of capital requirements the company would need going forward, he replied, “Excuse me. Next. Boring bonehead questions are not cool. Next?”

When another participant in the call asked how reservations for Tesla’s more affordable Model 3 car have impacted the company’s operations, Musk refused to answer, scalding that, “We’re going to go to YouTube. Sorry. These questions are so dry. They're killing me.”

He reserved his harshest criticism, though, for the press. Discussing projections for Tesla bringing self-driving cars online, Musk blamed regulators’ attention to the kinds of autonomous vehicles Tesla is attempting to produce on “inflammatory headlines” and “irresponsible journalists.”

“Broadly there's over a 1 million, I think 1.2 million automotive deaths per year. And how many do you read about? Basically, none of them,” Musk chided. “But if it's an autonomous situation, it's headline news, and the media fails to mention that…actually they shouldn't really be writing the story, they should be writing the story about how autonomous cars are really safe, but that's not the story that people want to click on.”

He added that, “it's really incredibly irresponsible of any journalists with integrity to write an article that would lead people to believe that autonomy is less safe.”

Several weeks ago, he suggested that a Los Angeles Times article noting that his business empire has received $4.9 billion in public funding was “pushed as propaganda” by the oil and gas industry. Before that he used a similar line to refer to the non-profit news site Reveal, calling their reporters’ investigation into working conditions at his factory “carefully constructed propaganda with a name that [would] make Orwell proud.” Orwell, as Reveal pointed out in response to Musk, was himself an investigative journalist and an ardent supporter of organized labor.

Challenged on this characterization by ProPublica reporter Jessica Huseman, Musk doubled down and called Reveal “just some rich kids in Berkeley who took their political science prof too seriously.”

Among the issues cited by those alleged rich kids—based on hours of interviews with current and former Tesla employees and on-staff safety experts—was the company’s failure to report a number of injuries in its flagship Fremont car factory. Workers who spoke with Reveal reported marathon shifts and repetitive stress injuries, and that workers were regularly carried out on stretchers. One former safety inspector said it’s “just a matter of time before somebody gets killed.”

The report followed more than a year of rising complaints on the part of Tesla employees housed in different parts of the company, many of whom have attempted to organize with the United Automobile Workers (UAW) to improve wages and working conditions. Several workers have filed ongoing lawsuits against Tesla. Among them is Son Nguyen, who was severely burned in an electrical fire last year and had to have his pinky finger amputated. A year on, Reveal's Will Evans reports, he’s covered in scars, suffering from chronic pain and facing several more surgeries to correct the damage done.

In a complaint to the National Labor Relations Board (NLRB), the UAW has alleged that Musk fired workers active in the unionization effort they were supporting, after he initially extended the promise of free frozen yogurt and an electric pod car roller coaster to employees as an anti-union peace offering. Unsurprisingly, the UAW has been another target of Musk’s recent tirades on Twitter, in which he claims that the union “destroyed once great US auto industry & everyone knows it.”

In a bit of poetic justice, Musk’s statements implying that unionization would cost workers their stock-options could land him in still more trouble with the NLRB, Bloomberg’s Josh Eidelson and Dana Hull report. “If you threaten to take away benefits because people unionize, that’s an out-and-out violation of the labor law,” said former NLRB head Wilma Liebman. On Thursday, the UAW filed an NLRB charge over Musk's tweet on stock options, alleging that he violated federal labor law.

It’s not just line-workers who have complaints about Tesla, either. Last year, female engineer AJ Vandermeyden accused the company of “pervasive harassment,” and of underpaying her for the same kind of work performed by her male colleagues. When complaints about workplace treatment are brought up, Vandermeyden told the Guardian, the common response is that, “We’re focused on making cars. We don’t have time to deal with all this other stuff.”

She also cited “unwelcome and pervasive harassment by men on the factory floor including but not limited to inappropriate language, whistling, and catcalls.” At the time, there were no women in Tesla’s chief executive leadership and only two female vice presidents.

In a blow to her fans who also happen to be fans of workers’ rights, the musician Grimes—who is dating Musk—appears to have jumped on the tech mogul’s fake news train, tweeting that “he has never prevented them from unionizing…it’s quite literally fake news: trust me, i’ve investigated this heavily and even visited factories etc. i have the receipts.” Grimes went on to call public transit “sketchy,” though she later deleted the tweets.

Musk isn’t the first Paypal co-founder to target the fourth estate. Former Musk colleague and noted Trump supporter Peter Thiel previously funded a lawsuit that shuttered the popular website Gawker. While Thiel has faced much public criticism for his attacks on the media—and belief in injecting himself with the blood of the young—Musk has generally been touted as a wunderkind with the smarts to save the world.

Some environmentalists in particular have embraced Musk for his work building electric cars and solar panels. But his treatment of the press and of his own workers should raise concerns about the kind of low-carbon world he has in mind.

In one of his final tweet on Wednesday, Musk said, “If you’re in media & don’t want Pravda to exist, write an article telling your readers to vote against it.”