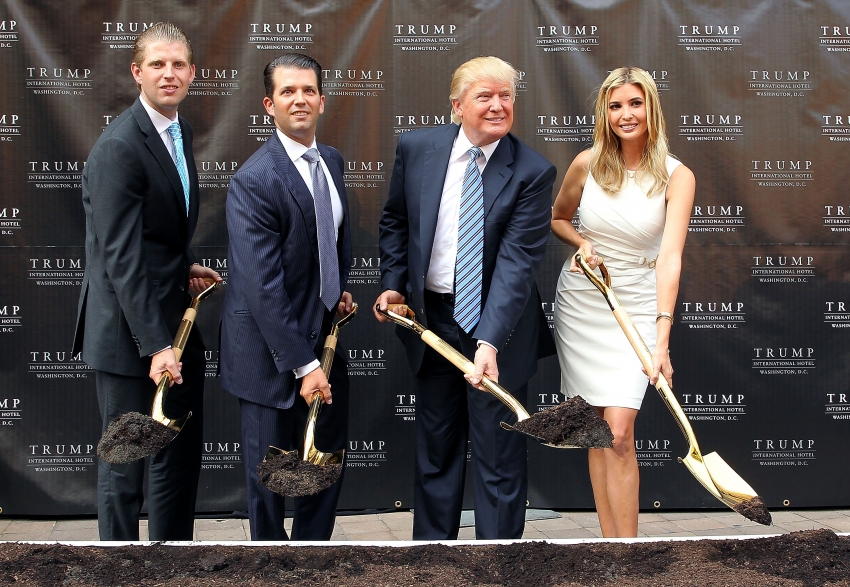 Donald Trump built no small part of his political brand railing against Chinese industry—so much so that The Huffington Post once published a supercut of the president sneering the word “China” dozens and dozens of times, for three full minutes.

While Trump's highly charged language about China "raping our country" showcased the president's usual xenophobia, the part about lost jobs spoke to real economic pain that other politicians appeared to ignore. The message played well in parts of the country—like my home state of Ohio, and much of the Midwest besides—that suffered grievously as prosperous industries pulled up their stakes and moved factories to other countries, China chief among them.

Despite wild policy fluctuations on other fronts, Trump has been uncharacteristically consistent on this point. For the last few months he’s been stoking a possible trade conflict with China, threatening tariffs on up to $150 billion worth of Chinese goods and drawing Chinese threats to penalize U.S. industries in turn (cannily, often from the very regions that supported Trump in the 2016 election).

The president even that tweeted he was looking forward to a trade war. (They’re “easy to win,” he said.) But within a few weeks, he seemed to roll over, suspending most of those tariffs while trade talks were underway. “We’re putting the trade war on hold,” Treasury Secretary Steve Mnuchin told Fox News.

Trump initially claimed that he'd gotten the Chinese to decrease their trade surplus by up to "$200 billion"—a claim the Chinese government flatly denied. By all appearances, Beijing simply made vague, unenforceable assurances to purchase consumer goods they were probably going to buy anyway.

For this, China didn't just get a reprieve on tariffs. It won a reprieve for a major Chinese corporation accused of running seriously afoul of U.S. sanctions.

If Trump wanted a boogeyman for his broadsides against Chinese industry, it would’ve been hard to come up with a better one than the Chinese phone maker ZTE. It’s China’s second-largest telecommunications firm, a third of which is reportedly owned by state entities.

But ZTE is no ordinary competitor for American firms. It’s also been officially sanctioned by the U.S. government for selling goods with American-made parts to Iran and North Korea, and then lying about its efforts to address Washington’s complaints. Not only that, but some experts have worried that the company could be using its phones as surveillance devices. The U.S. military has even banned the sale of ZTE phones on military bases.

Those sanctions may have been draconian, and perhaps the military's concerns were paranoid. But the cut-and-dry nature of the violations gave the administration a chance to exercise the sort of corporate oversight it often professes but seldom practices. This spring, Trump’s own Commerce Department announced a seven-year ban on U.S. companies selling ZTE component parts, like the microchips it desperately needs. The move was expected to put the giant out of business.

But then, in a move that The Washington Post reports went completely outside the usual White House policy channels, Trump made a stunning reversal: He was ordering Commerce Secretary Wilbur Ross to ease the sanctions. And more astonishingly, Trump tweeted that he wanted ZTE “to get back into business, fast”—because there were “too many jobs in China lost.”

In addition to being a policy 180, this was extremely off-brand. The president boastfully tweeting about saving jobs in China was, arguably, far more bizarre than his typical Fox and Friends liveblogs, or even dada-esque masterpieces like “covfefe.” (Remember that?) And right in the middle of a possible trade war of his own making, too.

The question, naturally, is why?

Mainstream media outlets dutifully offered seemingly plausible explanations. The Washington Post reported that “In exchange for easing restrictions on ZTE, U.S. officials are pressing China to relax tariffs on agricultural products and allow a U.S. technology company, Qualcomm, to acquire NXP Semiconductors.” So perhaps it was a simple concession in hopes of getting a better deal?

NPR, meanwhile, quoted an expert who suggested that banning U.S. microchip exports to ZTE would only encourage China to develop its own advanced technology, which worried some national security folks. Zhejiang University’s Douglas Fuller explained that the ban was "antagonizing China to double down on more techno-nationalist import substitution policies," which (I guess) sounds like a problem.

Others speculated that it was an attempt to get Chinese help with the upcoming North Korea summit, which Trump subsequently made a big show of canceling.

Perhaps all of these accounts were too generous. In fact, there might be a far simpler explanation for the reversal, one much more on-brand with Trump practices to date: plain old self-dealing.

Just 72 hours prior to Trump’s reversal on ZTE, The Huffington Post reports, the Chinese government—which, recall, also owns entities controlling at least a third of ZTE—made a $500 million loan to some Trump-branded properties in Indonesia. And Chinese banks promised another $500 million to the same. The Trump Organization has acknowledged the deal but refused to comment, while a White House spokesman asked about the deal said simply, "I'll have to refer you to the Trump Organization.”

Viewed in this light, Trump’s ZTE deal feels like far less of a reversal. It’s perfectly consistent for a president who’s praised President Rodrigo Duterte of the Philippines — whose drug war has killed over 20,000 people, yet whose capital also hosts an upcoming Trump Tower (the developer, in turn, is Duterte’s special envoy to Trump). Or for a president with extensive potential conflicts in the United Arab Emirates, which happens to be enjoying U.S. support as it conducts (with Saudi Arabia) a devastating U.S.-backed war in nearby Yemen.

Or, for that matter, a president who signed a tax plan seemingly tailor-made to save himself billions of dollars.

Former White House ethics lawyer Richard Painter calls the ZTE episode “yet another violation of the emoluments clause of the Constitution,” which bans the president from taking money from foreign governments. If that feels quaint to point out at this point, it’s no less quaint to recall that Trump first pledged to divest himself of his Trump Organization holdings, and then backtracked. (And then pledged not to open any new foreign business while he was in office, and then backtracked on that too.)

The ZTE case is ripe with Trump’s favorite punching bags—China, Iran, North Korea. It’s low-hanging fruit for his complaints about trade as well as national security. So if Trump’s not looking out for American industry in this politically easiest of cases, or even heeding his own leery military, you can bet he’s not looking out for out-of-work factory linemen in Michigan, Ohio, or Pennsylvania either.

He’s looking out, as always, for the gaudy letters emblazoned on the front of his tacky hotels.

This article was jointly produced by In These Times and Foreign Policy In Focus.