How Mexican Teachers Unions Are Pushing the Presidential Frontrunner Left 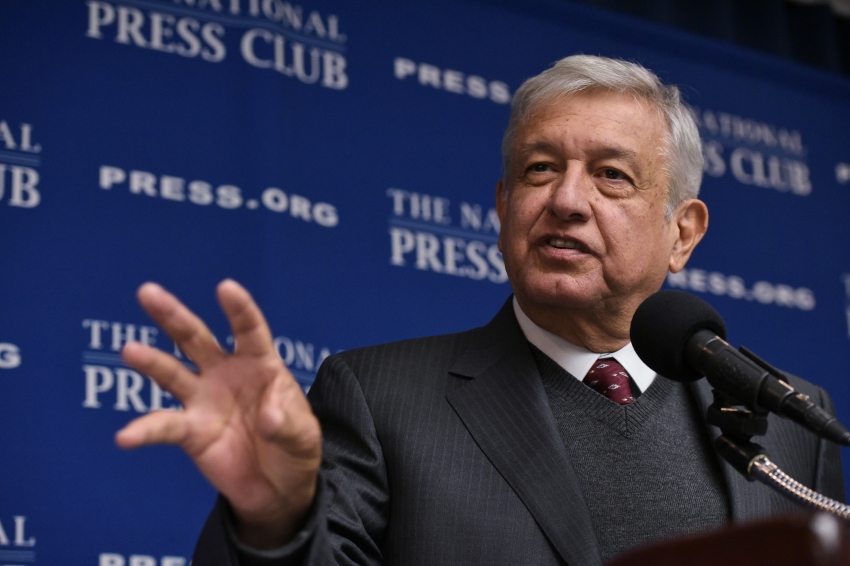 As Mexico moves closer to the July 1 Presidential election, candidate Andrés Manuel López Obrador (commonly referred to AMLO) is signaling his support for the thousands of communities fighting privatization across Mexico. López Obrador hails from the Juntos Haremos Historia coalition—a center-left coalition of National Regeneration Movement Party, The Labor Party and the Social Encounter Party. He is the former mayor of Mexico City and widely considered to be the frontrunner. López Obrador has found a significant ally in the Oaxacan teachers of Sección XXII, who are pushing the candidate to take a more left-leaning position on privatization and reject controversial education reforms.

The teachers' decision to pursue an agreement with the López Obrador was made in February during the V Political Congress of Sección XXII. Eloy López Hernández, Sección XXII’s General Secretary, announced the decision “to influence this electoral situation by orienting the conscious and reasoned vote towards the bases, to the parents of family and society in general, to being guarantors of the popular will in favor of the alternative project of nation" that López Obrador's campaign represents. Carlos Barriosa, a member the political section of Sección XXII, is using a pseudonyn due to concerns of political repurcussions. He tells In These TImes that, in previous assemblies, the teachers had decided to either boycott elections or to cast null votes.

“[The agreement]means one more form of struggle against the educational reform that the CNTE and Sección XXII have resisted in different ways,” said Barrios. “There is no consensus within the CNTE itself, but the tactic of seeking an ally in the electoral process is another way of fighting to bring down the nefarious reform.”

The education reforms were developed by President Pena Nieto in February 2013 amid widespread and sustained protests from teachers associated with CNTE from across the country in Mexico City. The reforms were officially passed into law by the Mexican congress in September of that year.

The new education system includes more standardized testing, as well as biannual performance tests for teachers in order to weed out underperforming teachers. Furthermore, teachers’ employment, pay and bonuses become tied to the outcome of testing.

Many teachers charge that the reforms fail to address the problems that the communities they serve face on a daily basis, including the lack of energy in rural communities, as well as widespread poverty. They argue that the reforms are truly a masked assault on their labor rights.

Besides stripping teachers unions of their influence, the reforms also began to permit the arrival of charter schools into the country. At the moment, there are at least 7 charter schools operating in Northern Mexico modeled off the Washington D.C.-based KIPP charter schools.

In June 2016, protests against the reforms turned deadly when Mexican Federal Police opened fire on protesters in the town of Nochixtlán, Oaxaca. Eight people were killed and at least 170 others were injured.

The Federal Government of Mexico has also sought to criminalize the leadership of the union for resisting the reforms. At least four leaders of Sección XXII are currently incarcerated for their protest. Members of the union hope that the election of López Obrador would lead to their liberation.

“We hope that justice will be done and the AMLO Government will grant them immediate freedom after 5 years unjustly imprisoned in maximum security prisons,” said Barrios.

The reform of education is just part of the privatization push that began decades ago. Since the financial crisis in the 1980s, the Mexican government has pursued neoliberal structural adjustment reforms. The impacts have been numerous, including lower wages, and more labor insecurity.

The administration of Pena Nieto has doubled down on these reforms, including overseeing the privatization of the national energy company Petróleos Mexicanos (PEMEX). The oil company was nationalized during the administration of Lázaro Cárdenas in 1938, in what is widely seen as a major accomplishment of the 1910 revolution.

López Obrador has faced criticism from pro-education reform groups such as Mexicanos Primero for his alleged double speak on his position on education, leading the candidate to state  in February 2018 that he would not repeal the reform. Yet López Obrador has sought to include the voices of teachers into the debate over the reforms. According to Progreso, he said in Febrary 2018 “you cannot carry out an education reform without the teachers.” He proposed working with the teachers to improve the quality of education without hurting labor rights.

Among those who hope to see a socialist candidate, López Obrador has been criticized for his relationship with business leaders. Sección XXII has historically taken a critical position to capitalist social relations in Mexico. In 2006, the union was at the heart of the uprising in Oaxaca against the governor Ulises Ruiz Ortiz, which established the Popular Assembly of the Peoples of Oaxaca. The teachers of Sección XXII acknowledge that the election of López Obrador is not the end of capitalism, but rather a step in the struggle against neoliberalism.

“We recognize that the project or political platform proposed by AMLO and MORENA does not represent an anti-capitalist government,” said Barrios. “But we believe that it can allow different conditions that allow us to continue searching for the true social transformation of a better world outside of neoliberalism.”