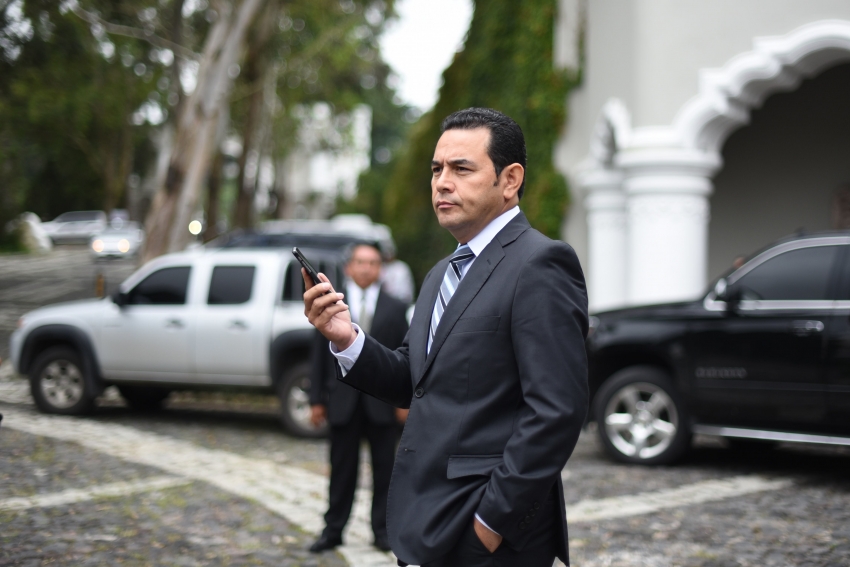 The bid to root out government corruption in Guatemala is on uncertain ground after a new Attorney General took the helm and President Jimmy Morales and his allies continue to resist investigations. But social movements, including rural organizations that view corruption as one piece of a puzzle of deep inequality, are exerting pressure for accountability.

As high-level corruption unravels, campesino groups are also increasingly motivated by soaring violence against their social leaders and the state’s failure to protect the poor communities smothered in the early June volcano disaster that killed at least 112 people, left at least 197 missing, and displaced thousands.

Attorney General Maria Porras took office May 17. Her predecessor, Thelma Aldana, attracted praise for landing a former president behind bars for corruption. Aldana also investigated President Morales for failing to report more than $1 million in contributions to his 2015 presidential campaign.

Aldana’s last act in office — announcing a third phase of investigations into Morales for illicit electoral financing — will be one of Porras’ first tests. The outgoing top prosecutor said the new evidence justifies asking Congress to strip Morales of immunity from prosecution for the second time in one year.

“It’s a challenge for the new Attorney General,” said Leiria Vay of the Committee of Campesino Development (CODECA), an organization that has fought for land rights and just wages for rural workers for more than two decades.

Maya K’iche indigenous activist and lawyer Benito Morales, a member of the Mayan People’s Council (CPO), told In These Times that, given the open investigations against the president, Morales named Porras in a “very complicated context” ripe for speculation. He stressed that Guatemalan people will play an important part in ensuring corruption investigations do not falter.

For CODECA’s Vay, social movements not only have a role in charting the future of anti-corruption efforts: They also face an opportunity to deepen the debate.

CODECA spearheaded a march in the capital city June 12 to call for Morales’ resignation, to pressure the new attorney general to champion corruption investigations and to demand an end to political persecution of land and human rights activists. Activists protested the assassination of at least seven campesino leaders, including four members of CODECA, in the span of one month, and slammed the government for negligence in handling the devastating June 3 eruption of the Fuego volcano that killed at least 110 people and decimated entire villages. The slogan “Resign now” targeting Morales has been a rallying cry for anti-corruption movements since evidence of the president’s shadowy electoral dealings came to light last year. The chant echoes the massive anti-fraud movement that rattled the government for months in 2015, forcing President Otto Perez Molina and Vice President Roxana Baldetti to step down over a multi-million dollar embezzlement scandal. Both await trial in jail.

But for CODECA, based in Mazatenango about 100 miles west of Guatemala City, the anti-impunity movement must go beyond calls to dispose corrupt politicians and instead tackle the roots of a system built on the dispossession of the many for the benefit of a few.

“Resignation is an immediate action,” Vay told In These Times. “As a campesino movement, we are working on a proposal and struggle for structural changes because the entire system is corrupt in Guatemala.”

“It’s not just changing or making a new constitution,” Vay explained. She argued that past constitutions have never represented the country’s indigenous majority, who face structural racism and soaring poverty rates, according to the United Nations. “What we want now is to direct change from the communities, that it be the people who meet and define an agreement for coexistence in a participative way.”

Guatemala’s Constitution was adopted in 1985 on the heels of a genocide against indigenous people during the bloodiest period of the 36-year-civil war under the dictatorship of General Efrain Rios Montt.

Benito Morales believes corruption cases create a “huge opportunity” for Guatemala to grapple with big questions of how to transform the political system. He said many social sectors now define their demands more clearly compared to during the 2015 protests against Perez Molina, but that there is more work to be done in understanding corruption as a structural issue.

For Vay, political education is key to bring people who mobilized for Perez Molina’s resignation — including urban middle class youth — into the larger conversation on “how to create real change.”

In the meantime, the struggle to keep corruption investigations on track is set to be an uphill battle.

Contrary to Attorney General Porras’ claims that Morales is a “good ally against corruption,” the president has bucked fraud probes. Morales has repeatedly tried to discredit the UN-backed body leading high-level investigations, the International Commission Against Impunity in Guatemala (CICIG), and kick out its chief commissioner, Ivan Velasquez.

Among other high-profile cases, CICIG has collaborated with the prosecutor’s office in investigating Morales for illegal campaign financing and charging Morales’ brother and son in a separate fraud case.

Meanwhile, if Porras follows her predecessor’s lead and seeks to strip Morales’ immunity, the buck will stop with Congress, where a majority bloc of lawmakers that critics call the “Pact of the Corrupt” already voted to protect Morales from prosecution.

Sandra Moran, a member of Congress with the progressive Convergence party, told In These Times that the bloc’s initiatives have two goals: controlling the population and ensuring impunity for themselves and their cronies.

"What this group that now we identify as the 'Pact of the Corrupt' does is [create] laws to control the population, laws of impunity for them and their friends, [and] laws that benefit a determined group,” she said.

Just days after the eruption, before the volcanic ash had cleared, Congress resumed discussions about reforms to modify the crime of illicit electoral financing, of which Morales is accused.

Political analyst Dr. Manuel Villacorta told In These Times that proponents of the reforms aim to “favor the politicians already convicted of illicit financing and prepare for the next elections so they can receive illicit capital without fear of criminal prosecution.”

He added that Congress’ failure to hold the executive accountable undermines democracy, while Morales’ “reactionary” stance threatens institutional stability by “generating social fragmentation that could lead the country to a situation of ungovernability.”

Benito Morales warned that Morales and his allies’ preoccupation with dodging accountability will have far-reaching consequences, including leaving “abandoned” sectors and services including healthcare and education to fall further by the wayside.

Despite the challenges, corruption investigations have opened a pandora’s box that has already propelled social movements forward.