The Janus Decision Was Never About the First Amendment. It Was About Destroying Labor. 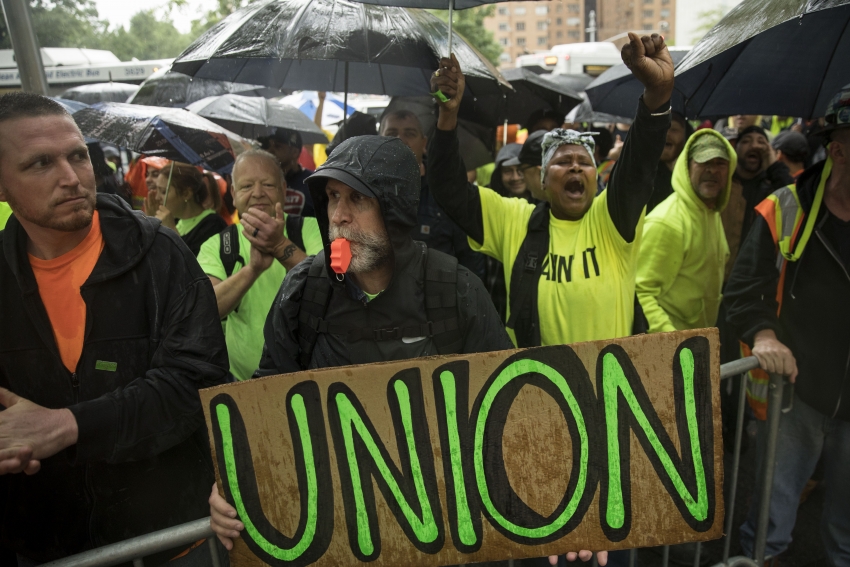 The objective of the Supreme Court majority has always been the destruction of labor unions. (Photo by Drew Angerer/Getty Images)

There is nothing about the Supreme Court’s 5-4 decision in Janus v. AFSCME, overturning 41 years of precedent and declaring that agency fee/fair share is unconstitutional, that surprised me. It would have been a miracle for the conservative majority to have decided otherwise.

Perhaps, if they had been true to their alleged conservative principles, they would have decided that the matter of whether public sector unions could negotiate agreements with governmental entities that provided for represented—though non-union—workers to pay their fair share, was a matter for the states. But as we have seen over time, there are few principles that the right-wing feels bound to respect.

Much will be written about the Janus v. AFSCME decision in the coming days and months by people far more learned than this writer. Nevertheless it felt important to make note of one critical issue: the matter at stake had nothing to do with the First Amendment.

The Court majority suggests that agency fees paid by non-members challenge the freedom of speech of workers who choose not to join a labor union. As the Court minority points out in their dissent, that is not the actual issue at hand. Unions do not inhibit the freedom of speech of members or non-member agency fee payers. Labor unions do have a statutory right to fairly and equitably represent all workers in a given bargaining unit, i.e., within a particular jurisdiction where common interests have been identified. In fact, labor unions are, by law, the exclusive representatives of workers in a certified bargaining unit, i.e., there cannot be another union representing the same workers.

The matter before the Court came down to whether workers who are represented by a union have an obligation to contribute towards the cost of representation. In any other institution the matter would be simple. If, for instance, you live in a town or city and you are required to pay taxes, you do so in order to cover the collective costs of that jurisdiction. Individuals cannot declare one day that as a result of differences with a government body that they should be able to avoid taxes. Yes, people have tried that route and there is not a good ending to that story.

In the case of labor unions, they have been granted by law the right and duty to represent workers in a given economic jurisdiction—a bargaining unit. Workers in the public sector are not obligated to join the union but the compromise that was established, and been in operation for 41 years in many states that permit public sector unionism, was that those who choose not to join contribute towards representation costs. Thus, an individual worker who decides not to join the union may, nevertheless, face an issue for which they need representation. Representation costs money. A case may go to arbitration, for instance, which can be very expensive. There may be issues that have to be litigated in court. Indeed, an issue may need to go to a legislative body. These steps can be very expensive. The Supreme Court majority knows this and, essentially, what they said today is that they do not give a damn.

The objective of the Court majority, along with their political allies, has always been the destruction of labor unions. Of course they will not confirm that, but their actions have been continuously telegraphed. Janus is a decision that aims to weaken the ability of public sector unions to represent their respective workforces. As the Supreme Court majority knows, from any assessment of “open shop” situations, when a union is compelled—at its own cost—to represent workers that they must represent by law, their resources are drained.

The moves towards “open shop,” that is, no forms of union security, have been underway for a long time. There have been, throughout the history of labor unions in the United States, periodic offensives by the employer class to either eliminate unions altogether or weaken them significantly. In the current moment, at the federal, state, county and municipal levels, public sector unions are perceived as an obstacle to the political Right and much of corporate America that seeks to eliminate the social safety net, privatize all that can be privatized, and weaken government to the point that its only relevance is in the realm of police, fire, prisons and, of course, the military.

Too many unions lived in utter denial about the danger of the continuous “open shop” offensives. They assumed that this would not happen in either the public or private sector. In some of the worst cases they relied on agency fee payers rather than recruiting all agency fee payers into the unions as full members. The labor unions in the U.S. Postal Service have demonstrated that one can be successful in organizing in an open shop environment. Several of the bargaining councils in the American Federation of Government Employees have also demonstrated this.

Now the immediate challenge facing labor unions is their transformation into militant, forward-thinking and social justice institutions. For years most of the leadership of organized labor believed that union transformation could be punted or, at best, resolved through simply organizing more members. The Supreme Court’s majority has now demonstrated that we have only two choices: fight or die. And fighting means becoming organizations that are constantly speaking on behalf of workers, whether in our ranks or not, demonstrating each day that our movement is a movement grounded in the struggle for social and economic justice. Case in point: the teacher-led insurgencies that spread across the country this year.

Janus is not the end of the story. It is simply the end of a chapter.