Low Wages Are Driving a Shortage of Care Providers. Now Elders and the Disabled Face a Crisis. 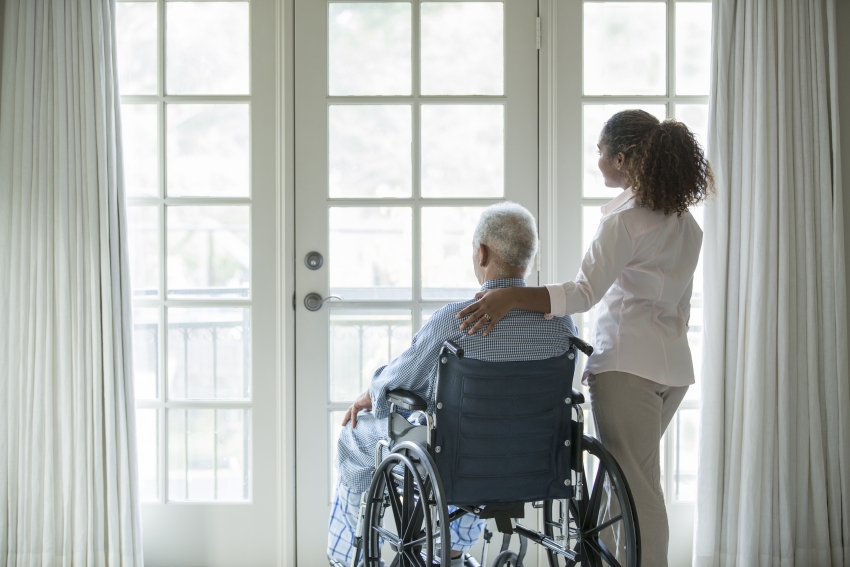 Across the United States, a shortage of care providers is creating a crisis for elders and disabled people fighting to live in their own communities. (Getty images)

According to the Centers for Disease Control, nearly 14 percent of Americans have developmental disabilities like Down Syndrome, cerebral palsy and autism. The rates of such disabilities are on a steady rise, and some members of these populations need services to develop skills, live independently and accomplish goals. California faces a severe shortage of direct service professionals who offer this assistance due to low wages, high costs of living and demanding working conditions. People like Alyssa Wade, 19, who works with developmentally disabled clients of Strategies to Empower People (STEP) in the Sacramento, Calif. area, are fighting back.

They’re demanding a wage increase that better reflects the demands of their jobs, for which many earn at or close to minimum wage. Their employers — both the disabled people they serve and the agencies they work with — are supporting them in this goal. “Direct-service employees are not minimum-wage employees,” says Barry Jardini, director of government affairs for the California Disability Services Association. “We find it offensive that we’re scrounging for scraps just to pay them minimum wage.”

This problem is not limited to California. Across the United States, a shortage of care providers is creating a crisis for elders and disabled people fighting to live in their own communities. Historically, conversations about pay and working conditions for caregivers have been fraught. When the Obama administration introduced tougher workplace protections in 2013, some disability organizations fought these improvements, arguing that it would make it harder to guarantee care. Their concerns were largely rooted in worries about the federal government’s failure to increase funding to cover the added costs, but they seemed to pit disabled people against workers.

“I don’t think it's a reasonable position to, say, exempt us from minimum-wage laws, so that our employees don’t have to get the same sort of benefits. That’s problematic,” says Jardini. He’s closely involved with the labyrinthine fight to increase funding for disability services, protecting the interests of children and adults across the state.

A “right” to community-based care, but a shortage of people to provide it

California’s landscape for developmental disability services is somewhat unique, thanks to the 1969 Lanterman Act. The act mandates developmentally disabled people’s right to live in their communities and receive supportive services—and is an explicit protection against institutionalization. Historically, many developmentally disabled people ended up in costly and isolating institutions when they could have been better served at home. On a federal level, the Americans with Disabilities Act has extended related protections, while 1999’s Olmstead also affirmed the right to live in a “least restrictive” environment. This isn’t just a civil rights issue: Home and community-based services are much less expensive than institutionalization.

The Lanterman Act is one reason Jacqueline and Jack Cohen were able to move to Southern California with their autistic daughter Tamara, who is now 39, when Jack got a job offer in the 1990s. During Tamara’s childhood, they had trouble accessing services in New York State, and felt California — where Tamara now lives independently in an apartment with the assistance of a live-in roommate and a coach who helps her on the job at Barnes and Noble and California Pizza Kitchen — would provide their daughter with a better quality of life. “She has quite a bit of support,” says Jacqueline, “because she cannot be by herself.” That support comes from people like Wade, who earns just $11.50 an hour for her work.

Across California, 21 regional centers work with local providers to serve 300,000 developmentally disabled people, with funding coming through the state’s general fund and pass-through Medicaid dollars. Despite the fact that the cost of doing business in California is rapidly increasing, rates for services like day programs and supported employment have remained largely frozen, creating significant challenges for local providers. The problem is even worse, Jardini says, for employees who have worked with disability organizations for five or ten years: Compaction is keeping their wages static, which can turn such jobs into dead ends.

Wade says she doesn’t fault STEP, and that the agency tries to increase pay where possible. “They’re really good at being open and clear” about the factors that influence their ability to pay, she says. Workers like her are also paid by In-Home Supportive Services, a statewide program that has its own onerous restrictions on hours and pay. The state, she says, can pay irregularly, which is frustrating for low-wage workers living on the margins. “It’s super hard for some people to keep track ... when you’re looking at rent, student loans, this is where we lose a lot of staff,” says Wade.

With the state slow to increase reimbursement rates, providers are leaning more heavily on fundraising to meet their costs, says David Carucci, executive director of United Cerebral Palsy of San Diego County. When the state’s funding is insufficient to meet local minimum wage requirements, for example, organizations still have to pay their direct service providers the prevailing local minimum wage, and that requires them to make up the difference.

The high cost of low wages

Low pay leads to lower standards, and high turnover, two things that aren’t good for employees, providers or their clients, note the Cohens, who express frustration with finding and retaining quality people to support their daughter. “I would say our turnover rate is around 35 to 40 percent,” explains Nancy Batterman, the CEO of E&CO, which provides services in San Diego, Santa Cruz, Santa Clara, Riverside and San Bernardino Counties. In Silicon Valley, says Batterman, “we’re running about 20 to 30 open positions” because so few people are willing to work for minimum wage. E&CO relies heavily on college students like Wade, with more financial and schedule flexibility, to provide services.

Wade could be earning more elsewhere. “It’s the satisfaction you get from helping someone, helping them learn new things, supporting them in their lives. I wouldn’t take flipping a burger over that,” she says, adding that she’s troubled at the thought of leaving and disrupting the routine of the developmentally disabled woman she serves as a live-in roommate. Wade also works with her client’s sister, a woman who has medical needs and behavioral outbursts, and says it’s difficult for clients to adjust when their care providers rotate in and out of their lives. Sometimes, Wade says, people arrive on the job only to realize they’re not able to manage the behavioral, social, and medical needs of a client.

“Autistic adults don’t like changes in routine,” says Jack. “When people come and go, it’s a major adjustment.” Tamara, like Wade’s clients, needs to build and rebuild relationships with service providers over and over again.

When California announced its plans to increase the minimum wage to $15 statewide in a series of steps in 2016, disability services organizations hoped the state would be increasing their reimbursements to compensate. In fact, Batterman says, legislators suggested that was on the agenda. That didn’t happen; instead, a hard-fought budget increase in 2016 under ABX21 was almost immediately offset by the increase in the minimum wage, according to Jardini.

“We introduced a budget proposal to increase provider rates four percent, which would facilitate an increase in direct service professional wages,” says Jardini, but it hasn’t made it into the budget yet. Assemblyman Chris Holden has introduced a bill, AB 2623, to adjust provider rates, but this is his second go-round: The first try died in Senate committee after passing the Assembly.

Workers like Wade aren’t asking for much. “A good starting wage would be between $12.50 and $13,” she says. After a pause, she adds: “We’ve been paid so low for so long that any wage above or at [minimum wage] would be perfect.” Union workers in California think the state should do better, and are part of the Fight for $15 advocacy movement, pushing to ensure caregivers are included in California’s upcoming minimum wage increases.

California’s funding woes aren’t unique, and the state, like others, is also facing significant challenges as Congress debates the future of Medicaid. Forty percent of the state’s developmental disability support funding comes through the federal program. The institution of block granting or per capita caps could put developmental disability services organizations into competition with other community health entities, in a zero sum game.

Without an increase in rates, entities serving developmentally disabled Californians may need to start aggressively trimming their budgets, threatening the stability of services hundreds of thousands of people and their families have come to count on. This is something that troubles providers like E&CO — with California’s cost of living skyrocketing, the number of vacancies are growing. Nearly 50 years after the passage of the Lanterman Act, California is still struggling to live up to the promise of full inclusion for the developmental disability community.