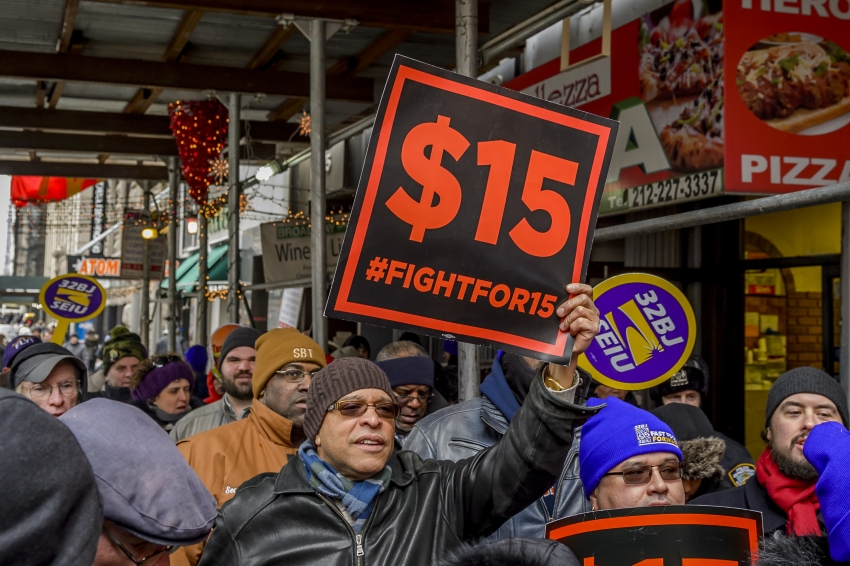 While headlines boast of a surging economy, workers are getting left in the dust. (Erik Mcgregor/Pacific Press/LightRocket via Getty Images)

As President Donald Trump and corporate media outlets on Friday enthusiastically touted new GDP figures showing that the U.S. economy grew by 4.1 percent in the second quarter of 2018, many economists and progressive commentators were quick to counter the glowing headlines by pointing out that corporations and the rich are feasting on most of the growth while most workers see their wages fall.

"What the president won't talk about is that there is slow—and even negative—growth in real wages adjusted for inflation. So if GDP is rising, but wages [are] falling, the money is going to the top," Timothy McBride, a health economist at Washington University in St. Louis, noted in response to Trump's celebratory speech on the White House lawn on Friday.

As Jared Bernstein, senior fellow at the Center on Budget and Policy Priorities, observed in an analysis of the Commerce Department's new numbers for the Washington Post, "in our era of high economic inequality, GDP should definitely not be taken as a signal of broad well-being. For that, we have to look at not just how 'the economy' is doing, but how all the people in the economy are doing."

On Twitter, Bernstein pointed out that—even in the midst of steadily rising growth, record-breaking corporate profits, and lofty promises from Trump and GOP lawmakers—most workers are not seeing a noticable boost in their paychecks.

"Any administration would tout a strong GDP report like today's, but if it's not reaching workers' paychecks, which it isn't, then cease the applause and get to work on policy to reconnect growth to much more broadly-share prosperity," he said.

News this week that the Republican Party is quickly moving ahead with their "tax cuts 2.0" plan—which would double-down on tax cuts for the rich and corporations—seems to suggest that Trump and the GOP are wholly uninterested in working to ensure that economic growth is distributed equitably.

"The new line from Republicans in Congress is that Americans are 'better off' because of last year's tax cut, so we have to extend it," Morris Pearl, a former managing director at Blackrock and chair of Patriotic Millionaires, said in a statement. "Well, some Americans are better off—people like me who are wealthy enough to not need work—but most Americans are still struggling."

While GDP growth may not be a good measure of workers' well-being, it is a good indication that the wealthiest Americans are seeing their incomes climb, given that most of America's economic growth in recent years—particularly after the 2008 Wall Street crash—has been hoarded by the top one percent.

In an analysis of recent economic trends on Thursday, New York Times columnist Thomas Edsall highlighted the "continued failure of wages to advance, despite job growth, while corporate profits shoot up to record levels."

Edsall then pointed to a striking chart, which shows that the share of profits going to labor has declined sharply since the early 2000s.

Far from reversing this trend and boosting the incomes of workers—as Trump claimed in front of the White House on Friday—the GOP's $1.5 trillion tax cut package has so far produced overall wage decline.

"While wages have risen by 12.9 percent overall since 2006, wages adjusted for inflation (so-called 'real wages') have actually fallen by 9.3 percent," notes Vox's Emily Stewart. "And between the first and second quarters of 2018 — after the tax cuts were enacted—real wages fell by 1.8 percent."