As Democratic Leadership Moves to Kill the Green New Deal, Cries of Betrayal

“There’s a big part of the Democratic Party that’s basically indifferent about the end of human civilization but paying it some lip service.”

In response to reports on Thursday that the Democratic leadership is taking steps to revive a defunct climate change panel, progressive groups and youth climate leaders warned that the move is an attempt by House Minority Leader Nancy Pelosi (D-Calif.) and others to kill the surging demand for a Green New Deal Select Committee and called it a failure to fight for ​“solutions on the scale we need” to achieve ​“a livable future.”

"Achieving the goals outlined in the resolution for a Select Committee on a Green New Deal are the bare minimum we need to preserve life as we know it for our generation—anything less from our political leaders is a betrayal of young people around the world."

“Without a mandate to create a plan and a requirement that its members don’t take fossil fuel money, we are deeply concerned that this committee will be just another of the many committees we’ve seen failing our generation our entire lives,” Sunrise Movement co-founder Varshini Prakash declared after news broke that the Democratic leadership chose Rep. Kathy Castor (D-Fla.) to lead the revived climate committee.

As the Huffington Post reported, Green New Deal proponents were blindsided by the Democratic leadership’s appointment of Castor, and it is unclear whether Rep.-elect Alexandria Ocasio-Cortez (D-N.Y.) — who led the push for a Green New Deal Select Committee — will even get a seat on the climate panel.

The Sunrise Movement said it has reached out to House Minority Leader Nancy Pelosi’s (D-Calif.) office for an explanation and vowed to keep fighting for a Green New Deal as if the planet depends on it — because it does.

“Achieving the goals outlined in the resolution for a Select Committee on a Green New Deal are the bare minimum we need to preserve life as we know it for our generation — anything less from our political leaders is a betrayal of young people around the world,” the Sunrise Movement declared.

“Failing to advocate for the solutions on the scale we need to give our generation a livable future shows a deep lack of moral clarity and courage from our Democratic leadership,” the group concluded on Twitter. 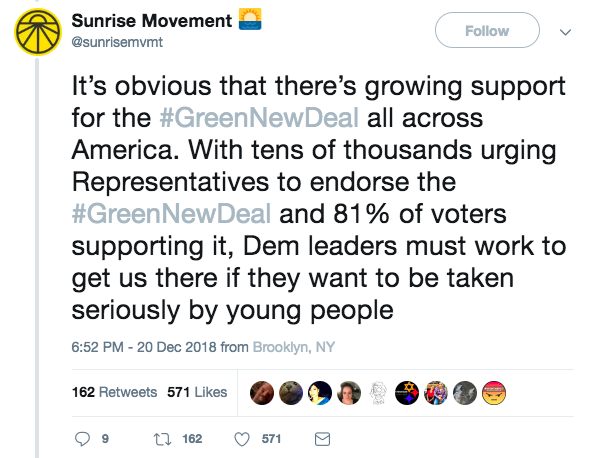 In an interview with E&E News—which first reported that the Democratic leadership chose Castor to head the revived panel — the Florida congresswoman quickly got off to an inauspicious start.

Echoing a talking point deployed by the likes of the Koch brothers and ExxonMobil, Castor suggested that it would be a violation of free speech to bar members who have accepted fossil fuel donations from serving on the climate committee.

“I don’t think you can do that under the First Amendment, really,” Castor said.

Though she later conceded in an interview with the Huffington Post that her comment was ​“inartful,” the remark sparked fury from progressives, who viewed it as another sign that much of the Democratic Party and its leadership is woefully unprepared to take the ambitious steps science says are necessary to confront the climate crisis. 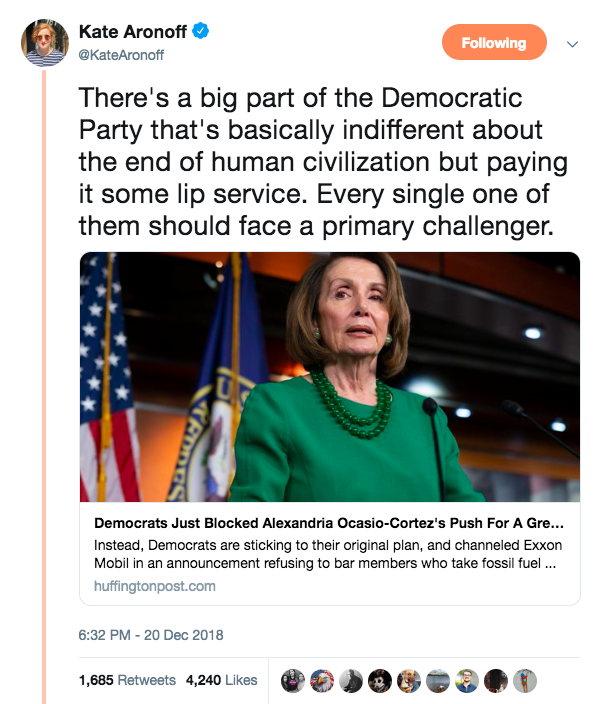 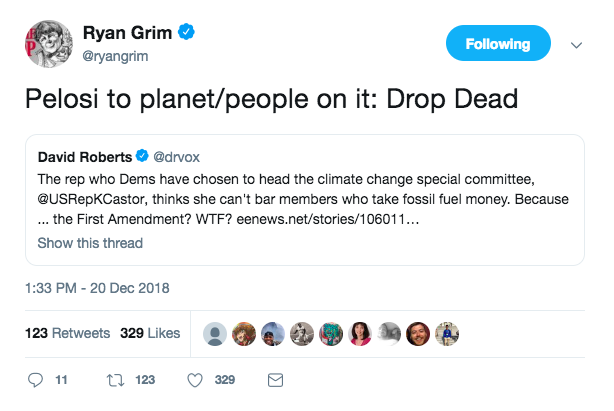 “Loading a climate committee with fossil fuel money is akin to letting foxes in the henhouse,” Ocasio-Cortez wrote on Twitter. ​“We shouldn’t be afraid to lead.” 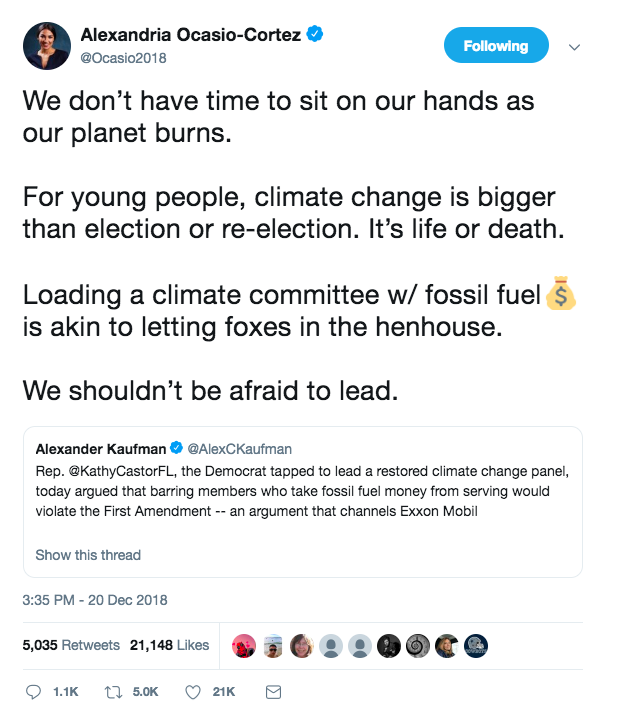 “I honestly thought the Democratic Party leaders would see this opportunity,” Waleed Shahid, communications director for Justice Democrats, added in a statement. ​“It’s infuriating to see a fellow Democrat basically parrot the talking points of the Koch Brothers when it comes to the very common-sense idea that any politician who accepts donations from the fossil-fuel corporations should not be allowed to legislate on climate change.”

Youth climate leaders in recent months have been urgently organizing, mobilizing, and getting arrested in droves to demand a bold and comprehensive action plan to save the planet, but critics said the Democratic leadership’s move to revive an old climate panel is effectively a signal to the burgeoning grassroots movement to ​“buzz off.”

Though the specific scope and mandate of the revived climate committee are not yet known, Castor told E&E News that while proponents of a Green New Deal ​“have some terrific ideas,” the ambitious proposal supported by 81 percent of Americans will not be the ​“sole focus” of the panel.

Justice Democrats responded with alarm to Castor’s comment, writing on Twitter, ​“Your sole focus won’t be to propose solutions that match the urgency and scale recommended by the U.N.‘s IPCC climate report?”

As Common Dreams reported, the Intergovernmental Panel on Climate Change (IPCC) warned that carbon emissions must be cut in half by 2030 to avoid planetary catastrophe. 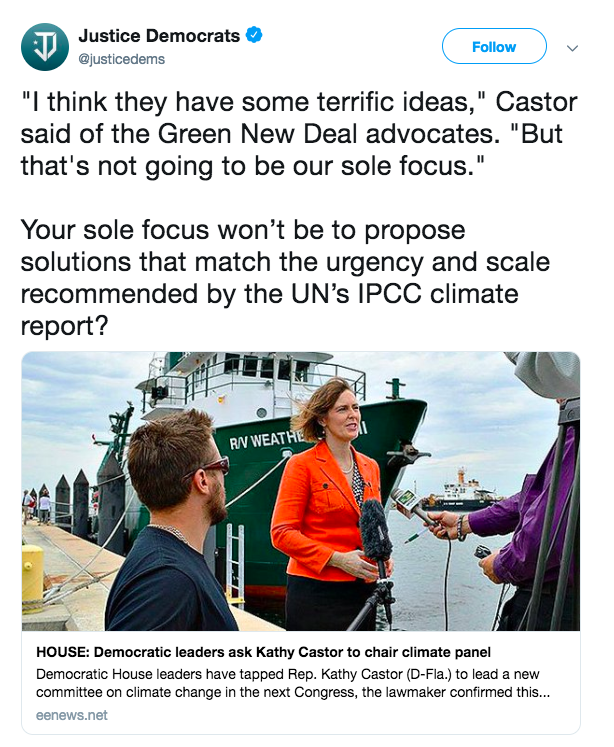 Though the Democratic leadership’s move to revive a House climate change committee that was shut down by Republicans in 2011 was viewed as a significant blow to the momentum for a Green New Deal, the Huffington Post​’s Alexander Kaufman pointed out that the grassroots movement succeeded in making a previously fringe proposal mainstream in a remarkably short period of time.

Get your copy
Have thoughts or reactions to this or any other piece that you'd like to share? Send us a note with the Letter to the Editor form.
More articles by Jake Johnson, Common Dreams
Feature
Trump Lets Raytheon Share Sensitive Bomb-Making Tech with Saudi Arabia
The president is defying Congress, which wants to shut off a flow of U.S. weapons that have been used to kill thousands of Yemenis.
Labor
Sanders and Warren Demand Bezos Answer for Amazon’s “Potentially Illegal” Union Busting
Labor
“You Can’t Eat GDP”: Workers Struggle as Trump and Corporate Media Tout Economic Growth
Similar articles
Feature
A Bank Even a Socialist Could Love
The fight for public banking is gaining ground in cities and states across the country.
David Dayen
Feature
Knowing What’s Nice
Kurt Vonnegut
Feature
Decisions, Decisions
As labor ponders which Democrat to endorse, it also girds for battle against the GOP in ‘04
David Moberg
Join our newsletter
Fearless journalism, emailed straight to you.
Subscribe and Save 59%