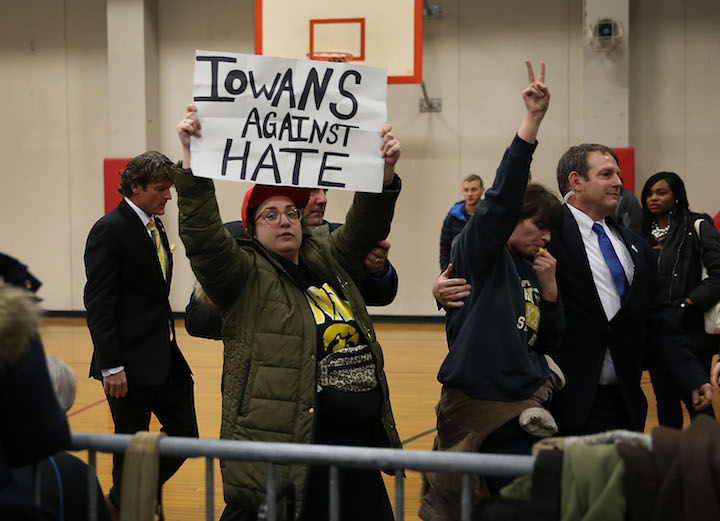 Protesters are escorted out after interrupting a Donald Trump campaign event at the University of Iowa January 26, 2016. (Photo by Joe Raedle/Getty Images)

MT. PLEASANT, IOWA—Isabel discovered she was pregnant May 14. She and her husband, Jack (names changed because of his undocumented status), had been trying to start a family for years. They had a miscarriage in 2015. In 2016, their baby girl died an hour and a half after being born premature. Given the past complications, this new pregnancy was a huge deal. But Isabel wasn’t able to tell Jack in person.

He was one of 32 workers seized during a May 9 raid at the Midwest Precast Concrete facility (MPC) in Mt. Pleasant. It was the largest Immigration and Customs Enforcement (ICE) raid in the state since 2008, when 900 agents blitzed a meatpacking plant in Postville and put a tenth of the small town’s population in jail.

Isabel’s stepfather, also an MPC employee, went out for lunch that day, narrowly avoiding arrest. He returned to find a deserted plant—uneaten plates of food, cars left in the parking lot.

When Isabel called Jack to tell him about the pregnancy, he was being held in an ICEcontracted detention facility in Wisconsin. He was overjoyed; he’d been using the time to think of baby names “for whenever we do have a kid.”

But Jack was also worried. He didn’t know whether he’d be present for his child’s birth, still in detention, or deported.

Then Isabel received a call from the Eastern Iowa Community Bond Project (EICBP), part of a wave of new groups that bail out detained immigrants. They wanted to help.

EICBP posted Jack’s bond on June 18, and he’s now home with Isabel. His immigration hearing is scheduled for 2019. He could still be deported to El Salvador, where gang violence and the state crackdown on organized crime (carried out with U.S. support) cause many civilian causalities. Still, Jack will be present for the birth of their child, which Isabel considers a blessing.

“If the outcome is not favorable, at least they’ve had time to sort out family affairs,” says Natalia Espina, a co-founder of EICBP.

When EICBP started in January 2017, it was one of two immigration bond funds in the nation. Since its scrappy, grassroots beginning, the small, volunteerrun organization has raised over $80,000 to free a total of 21 immigrants, 13 of whom are undocumented workers seized during the May 9 raid. Today, EICBP is one of 15 active immigration bond projects in 12 states and one of 37 members of the National Bond Fund Network.

For most detained immigrants, securing a bond is the only way to live outside detention while the federal government decides whether to deport them, a process that averages 700 days. There is no federal limit on how long an immigrant can be held without trial.

According to a PBS News Hour investigation, the average bond amount has increased under President Trump, with immigration court judges often setting bond at amounts in excess of $10,000—well above the $1,500 legal minimum. Higher bonds mean that immigrants are spending more time in detention (and for-profit detention facility operators are making more money). Jack was fortunate to get out in 40 days.

EICBP worked with a network of interfaith groups in Mt. Pleasant that raised funds for the MPC workers’ legal fees, including Jack’s. Immigrants facing removal have a right to legal representation, but not at the government’s expense, because deportation is not treated as a criminal matter. Unsurprisingly, immigrants with access to attorneys fare better at every stage of the process.

Those like Jack who are fighting for “cancellation of removal” face an uphill battle: They must demonstrate“good moral character,” no convictions that render them deportable, and a continuous presence in the U.S. for at least ten years. What’s more, they must prove that deportation would cause “exceptional and extremely unusual hardship” to a child, spouse, or parent—above and beyond the expected trauma of separating a family.

During the month that her husband was imprisoned, Isabel experienced what the U.S. government would likely consider “unexceptional” hardship. “At night, the entire house would be quiet—it was just bad,” she says. Seeing her husband’s empty place in the church pew “was really sad, knowing that I had no idea when I would see him again or when he would fill that spot.”

Elena Carter is a freelance writer and teaches at the University of Iowa.