In a Historic Move, Los Angeles Educators Vote To Strike 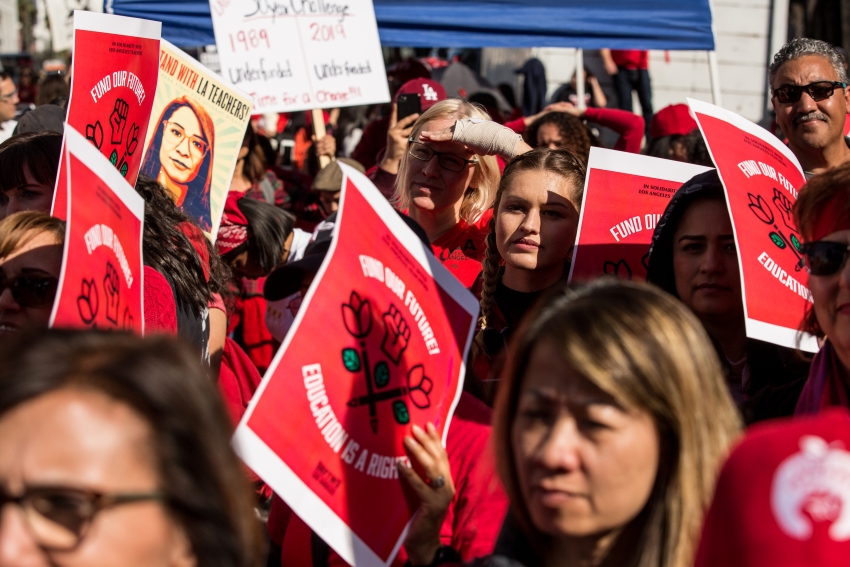 Thousands came to the #Allin4Respect rally in downtown Los Angeles in May, part of the lead-up to the strike. (Photo from UTLA Facebook)

Today teachers and education workers in Los Angeles, the second largest school district in the country (after New York), voted 98 percent to 2 percent to authorize their first strike in nearly 30 years.

Last spring’s strikes and school walkouts by educators from West Virginia to Oklahoma, Arizona and more, took place in so-called red states. This school year, the strikes have moved to blue states, with teachers in Washington state school districts already on strike and Seattle teachers approving a strike vote earlier this week. The LA educators will likely go on strike, if they can’t negotiate a settlement through mediation, in mid-to-late October.

They have been working under an expired contract for over a year, since June 30, 2017. At the top of the educators’ list of demands are reducing class size; less testing and more teaching time; basics such as new textbooks, and restoring essential support structures that students need, including school nurses and guidance counselors.

California, despite being one of the wealthiest states in the nation, ranks 43 out of 50 in funding per pupil, according to the union. Julia Lathin, an art history teacher at Hamilton High, says, “Our school has over 2,000 students and one nurse, but she was only hired to be here part time. Because of this, I let my students know that I have a cabinet in my classroom that’s always stocked with pads and tampons. I need these kids focused on their education and not worrying about if they’re going to bleed through their pants at school because there isn’t always a nurse on campus.”

Out of dozens of teachers interviewed for this article, not one placed wages at the top of their priorities list. When asked, “If management offered to meet your salary demands and nothing else, would you still plan to strike?”, all said yes. Among the top concern voiced by teachers is the need to eliminate Section 1.5 of their contract, which allows teacher-to-student ratios of 1 teacher—alone in their class without assistance—to up to 46 students. That’s right: one teacher responsible for up to 46 students.

Brandon Abraham, an English teacher with 18 years of teaching experience, says, “When I started teaching in 1999, the teacher to student ratio was 1:20. I had twenty students in my class. These days, because of all the cuts, we don’t even have school librarians anymore, we are teaching basic literacy. They keep cutting and cutting and cutting essential services that students need to learn. To do a good job—which we do—is hard enough when conditions are perfect, but when the conditions get this challenging, it’s hard to motivate and inspire students. The problem is, really good teachers are leaving the profession because the conditions have become so difficult.”

United Teachers of Los Angeles (UTLA) is one of several big-city education unions where progressive, forward-thinking teachers have won internal elections with a commitment to seriously rebuild public education. They understand that in order to take on the powerful pro-corporate, pro-privatization agenda of Betsy DeVos and the corporate charter big-money interests, their union has to be strong and  strike-ready. In the opening page of the strike handbook booklet they’ve been handing out to teachers, Alex Caputo-Pearl, the union’s president, states, “Being strike-ready is an essential component of our strategy to win a great contract for the Schools LA Students Deserve.”

The strength of this strike vote comes on the heels of several years of strengthening the union internally. Central to the shift was hiring an organizing director, Brian McNamara, who understood the central role of the rank-and-file. In the spring of 2018, when it was already clear that the management team wasn’t serious about committing the resources needed to restore Los Angeles schools that have been cut to the bone, the union conducted its first structure test in the lead up to the strike authorization vote. A structure test is when a union carefully measures, through worker-to-worker assessments, what percentage of members per structure, in this case per school, are actively participating in each activity of any given campaign, for example, a contract fight. Across 950 schools, a majority of teachers signed a petition supporting the UTLA’s negotiation demands. The petition also asked several other questions, including whether members supported a September strike vote if necessary. It’s this kind of strategic, methodical work—engaging the rank and file membership—that actually helps the leadership gage and assess the actual strike-readiness. And in a city where the school board recently appointed a Wall Street billionaire with zero education experience as the superintendent of schools, knowing the rank-and-file are strike ready is key to defeating austerity.

In addition to building a union strong enough to strike, this work is also crucial for sustaining high membership now that the U.S. Supreme Court has ruled in Janus that public-sector union membership is voluntary. At each strike vote station, in addition to fact sheets about what has and hasn’t happened in negotiations, there were membership forms, enabling teachers to recommit to the union at a crucial juncture.

With corporations on a warpath to privatize schools, the future of public education is at stake across the country, and Los Angeles is ground zero for this struggle. It’s time the entire progressive movement understands and appreciates that the strongest force fighting to save and improve public education are teachers unions. The sooner we embrace their struggle as our own, no matter our profession, the better.