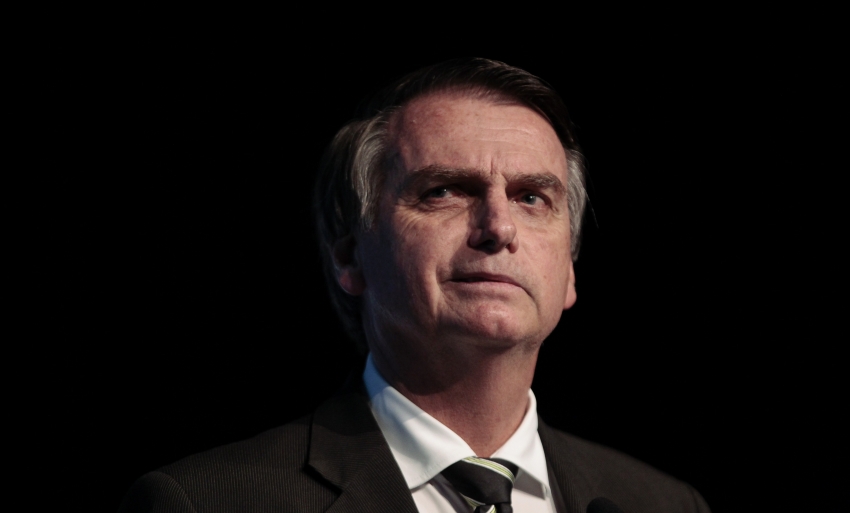 Just off the interstate highway near the Brazilian city of Florianópolis is a large replica of the Statue of Liberty. Behind it the façade of the mega department store is modeled after the White House. Rows of columns beneath a triangular roof. Inside busy shoppers look for bargains on rugs, children’s toys, silverware and everything in between.

This is one of 114 megastores in 15 states belonging to Havan, one of Brazil’s largest department store chains. Since April, Havan’s roughly 15,0000 employees have been made to wear official green and yellow t-shirts, the colors of the Brazilian flag. The text, “The Brazil we want depends on us,” is emblazoned across the front in yellow letters, beneath a small Brazilian flag and a company logo. Employees were told the shirts were made in support of the Brazilian team at the World Cup.

“But we know better,” one employee working a cash register, who asked not to be named, told In These Times in September. “They are in support of one of the presidential candidates.”

That presidential candidate is the far-right candidate Jair Bolsonaro, who handily won the first round of the elections on October 7, and is now headed to the 2nd round against the leftist Workers Party candidate Fernando Haddad later this month.

Bolsonaro, a former Captain in the Brazilian military, has supported torture and praised the country’s dictatorship, which ran from 1964 through 1985. He has been fined for racist, sexist and homophobic remarks, and recently joked about killing Workers Party supporters at a rally in Acre. He promises to fight corruption and violence with an iron fist, which has won him overwhelming support. His campaign slogan, “Brazil above everything, God above everyone,” is a nod to his deep connections with the country’s growing evangelical movement, which now makes up roughly a quarter of the population. Despite his incendiary rhetoric, Bolsonaro is ahead of Haddad in the latest poll, and expected to win the 2nd round.

The owner of Havan, Luciano Hang, is an avid Bolsonaro supporter. In late September, an internal message to employees was leaked stating that they could vote for whomever they choose, but “if the left wins,” Hang would close stores and fire employees.

Six days before the first round of the Brazilian elections, Hang assembled hundreds of employees at the store’s head office in Brusque, Santa Catarina. Clad in their green and yellow company t-shirts, the employees were lined into orderly rows. Hang stood on the stage before them—with a microphone and a yellow shirt bearing Bolsonaro’s face—and led them in a 39-minute rally in support of the candidate.

They sang the national anthem. He had them dance to one of Bolsonaro’s catchier theme songs. He railed against the failures of communism, and said the Workers Party was threatening to destroy the country.

“Have you ever seen a Workers Party member, a leftist, do well in life, working honestly?” He asked the crowd toward the end of his monologue. “Either we change the country now, in the first round, or we will become a Venezuela.”

Hang televised the rally live on his Facebook page. Two weeks later it had 1.2 million views.

This was an extreme case, but it was not isolated. According to reports, in the lead-up to the first round, in two Brazilian states alone—Santa Catarina and Paraná—the Public Labor Ministry received 87 complaints against 23 companies for attempting to coerce their employees to vote in favor of one candidate or another.

Paraná’s Condor supermarket chain was one of them. The company has 44 stores and 12,000 employees. Five days before the first-round election, owner Pedro Joanir Zonta sent a letter to his employees highlighting his support for Bolsonaro and asking them to trust him and Bolsonaro "to put Brazil on the right track.”

The Public Labor Ministry quickly ordered him to retract his note, and publish a clarification, or face a daily fine of roughly $27,000.

Hang was also forced to desist from pressuring his employees to vote for Bolsonaro, after a judge from the 7th district labor court of Florianopolis threatened a roughly $135,000 fine. On October 5, Hang published a message on his Facebook page complying with the court order and certifying that his employees were free to vote for whomever they choose.

Echoes of the Past

There is a long history in Brazil of powerful individuals attempting to sway the vote of others.

In the early years of the Brazilian Republic, in a system known as the Cabresto Vote, feudal strongmen forced electors to cast their ballots for them or their candidates.

“What’s at the root of this is a profound disrespect for the individual,” Ernesto Seidl, political science professor at the Santa Catarina Federal University, told In These Times. “There is a concept that is centuries old in Brazil, and held by the powerful, the bosses, the owners, the rich, the employers, that their employees, are practically their followers.”

Employers today—particularly in the countryside—are known to attempt to intimidate workers to vote for their candidate. But never so blatantly and visibly as this year. The ever-pervasive power of the Internet is one factor.

The Santa Catarina-based labor lawyer and university professor Prudente Mello also blames the 2016 impeachment of president Dilma Rousseff and the passage of the 2017 Labor Reform—which weakened unions, and gutted labor rights and workers’ ability to resolve grievances—for empowering businesses to take actions like those by Havan and Condor.

“Employers are feeling totally free to do these types of things. In the world we are living in today, workers today have become merchandise. Merchandise which the employers feel free to use, and to impose what they want, how they want it, or else they are thrown away,” Mello told In These Times.

Mello said that intimidations like these against employees are a clear violation against Brazilian law, international labor conventions, and the declaration of human rights.

But Hang has denied that he has done anything wrong.

“You can tell them who you think they should vote for, but you can’t ever force them to vote for anyone,” he told the Folha de Sao Paulo newspaper.

The measures taken by the Labor Ministry have barred Hang from using his employees to campaign, but it hasn’t slowed down his activism in support of Bolsonaro. From his Facebook page, where he has almost 2 million followers, he holds daily Facebook lives where he rallies for the candidate. The week after the first-round election, he was joined by none other than Bolsonaro himself.

“It’s life or death [for the 2nd round election] on October 28,” said Hang. “It’s a referendum. Either you vote for Bolsonaro and you are for Brazil. Or you are against Brazil. There is nothing else to say.”