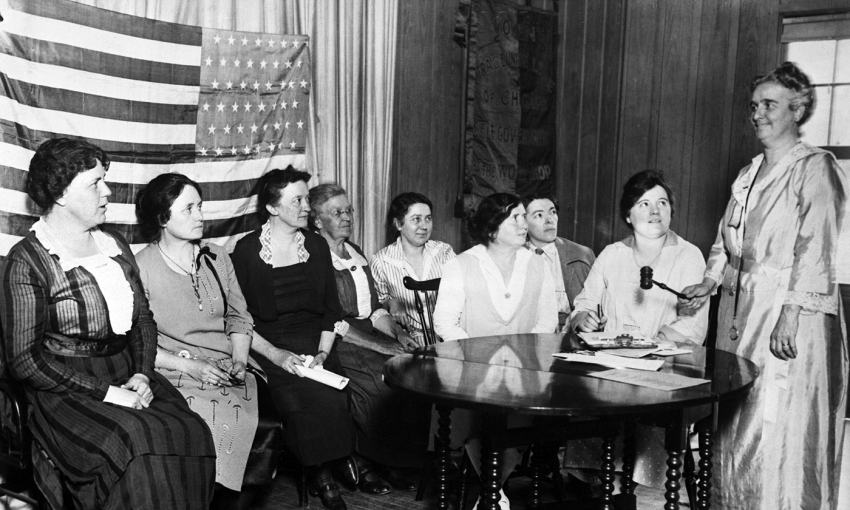 Rose Schneiderman, third from the right, at a Leaders of the National Women’s Trade Unions session with other members. (Photo by Bettmann/Getty Images)

An unsung shero of the early 20th century, Rose Schneiderman organized women to fight for laws to protect them from sexual harassment and assault in the workplace.

Whenever new protest movements emerge, people look to history for lessons from activists and thinkers who came before. We all stand on the shoulders of those who struggled, sacrificed, and organized to push for a more humane society.

#MeToo is one such movement. It has not only raised awareness about the pervasiveness of sexual harassment and assault—particularly of women—but is also an example of what happens when those who are relegated to a second-class citizenship status come together to speak out.

History is filled with courageous and heroic women who launched crusades for women’s liberation and workers rights, and campaigns against rape and other forms of sexual assault. These women were writers and thinkers such as Sojourner Truth, Susan B. Anthony, Charlotte Perkins Gilman, Ella Baker, Betty Friedan, Dolores Huerta, and many more.

Another is Rose Schneiderman, an unsung forerunner of the #MeToo movement, who organized women to fight for laws to protect them from, among other exploitation, sexual harassment and assault by higher-ranking men in their work spaces.

On March 25, 1911, a fire at the Triangle Shirtwaist factory in New York City killed 146 workers, mostly female immigrants and teenagers. One week later, activists held a meeting at the Metropolitan Opera House to memorialize the victims.

Then 29-year-old Schneiderman—a Jewish immigrant, sweatshop worker, union organizer, feminist and Socialist—rose to speak. Having seen the police, the courts, and politicians side with garment manufacturers against the workers, she questioned whether better laws would make a difference if they were not enforced.

“I would be a traitor to these poor burned bodies if I came here to talk good fellowship. We have tried you good people of the public, and we have found you wanting,” Schneiderman told 3,500 listeners.

“This is not the first time girls have been burned alive in the city. Every week, I must learn of the untimely death of one of my sister workers. Every year, thousands of us are maimed,” Schneiderman said to a mixed audience of workers and the city’s wealthy and middle-class reformers. “There are so many of us for one job, it matters little if 146 of us are burned to death.”

Only 4 feet, 9 inches tall, with flaming red hair, Schneiderman was a mesmerizing orator. Her speech fired up the garment workers in the balcony and the wealthy women in the front rows.

Born in Poland, Schneiderman came to New York City with her Orthodox Jewish family in 1890. She was 8 years old. Two years later, her father died of meningitis. To make ends meet, her mother took in boarders, sewed for neighbors, and worked as a handywoman. But the family was still forced to rely on charity to pay the rent and grocery bills.

At 13, Schneiderman dropped out of school to help support her family. She found a job as a department store sales clerk, which was considered more respectable than working in a garment sweatshop, in part because retail workers faced less sexual harassment. But three years later, she took a better paying but more dangerous job as a cap maker in a garment factory.

Of the more than 350,000 women in the city’s workforce, about a third worked in manufacturing jobs, making and packing cigars, assembling paper boxes, making candles, and creating artificial flowers, but the heaviest concentration of women workers—about 65,000 of them—toiled in the clothing industry.

Schneiderman believed in building a movement of men and women workers to change society, but she also recognized that women workers faced extra exploitation (including sexual harassment) from employers and union leaders. So, she put particular emphasis on organizing women and fighting for laws to protect them.

Schneiderman joined the struggle for women’s suffrage, a cause that many male union leaders—and even some female unionists—thought was secondary to the battle for workers rights. And she worked to forge alliances with middle-class reformers and upper-class feminists, such as Frances Perkins and Eleanor Roosevelt.

By 1903, at age 21, Schneiderman had organized her first union shop, the Jewish Socialist United Cloth Hat and Cap Makers’ Union, and had led a successful strike. By 1906, she was vice president of the New York chapter of the Women’s Trade Union League (WTUL), an organization founded to help working women unionize. In 1908, Irene Lewisohn, a German Jewish philanthropist, offered Schneiderman money to complete her education. Schneiderman refused the scholarship, explaining that she could not accept a privilege that was not available to most working women. She did, however, accept Lewisohn’s offer to pay her a salary to become the New York WTUL’s chief organizer.

Schneiderman’s organizing efforts among immigrants paved the way for a strike of 20,000 garment workers in 1909 and 1910, the largest by American women workers up to that time. The strike, mostly among Jewish women, helped build the International Ladies’ Garment Workers Union (ILGWU) into a formidable force. The WTUL’s upper-class women—whom Schneiderman called the “mink brigade”—raised money for the workers strike fund, lawyers, and bail money, and they even joined the union members on picket lines. Schneiderman was a key figure in mobilizing this diverse coalition on behalf of the landmark labor laws passed by the New York legislature after the Triangle fire.

In 1911, she helped found the Wage Earner’s League for Woman Suffrage. “I hold that the humanizing of industry is woman’s business,” she said at a suffrage rally. “She must wield the ballot for this purpose.” So, she mobilized working women to fight for the right to vote.

Although she often found it difficult to deal with the condescension, anti-Semitism, and anti-socialism of some of the wealthy suffragists, she persisted and in 1917 women won the right to vote in New York State.

When the Republican-dominated state legislature tried to repeal some of the post-Triangle labor laws, Schneiderman, the WTUL, and the National Consumers League successfully organized the newly enfranchised women to oppose the attempt and then to defeat anti-labor legislators in the 1918 election.

In 1920, Schneiderman ran for the U.S. Senate on the Labor Party ticket. Her platform called for the construction of nonprofit housing for workers, improved neighborhood schools, publicly owned power utilities and staple food markets, and state-funded health and unemployment insurance for all Americans. Her unsuccessful campaign increased her visibility and influence in both the labor and feminist movements.

One of Schneiderman’s closest allies was Eleanor Roosevelt, who joined the WTUL in 1922, coming into contact with working-class women and radical activists for the first time. She taught classes, raised money, and participated in the WTUL’s policy debates and legislative actions. As first lady, Roosevelt donated the proceeds from her 1932–1933 radio broadcasts to the WTUL and promoted the WTUL in her newspaper columns and speeches.

Schneiderman was regularly invited to Hyde Park to spend time with Roosevelt and her husband, Franklin D. Roosevelt. Schneiderman’s conversations with FDR sensitized the future governor and president to the problems facing workers and their families.

In 1933, after his inauguration as president, FDR appointed Schneiderman to the National Recovery Administration’s Labor Advisory Board, the only woman to serve in that post. She wrote the National Recovery Administration codes for every industry with a predominantly female workforce and, along with Frances Perkins, played an important role in shaping the National Labor Relations (Wagner) Act, the Social Security Act, and the Fair Labor Standards Act, which established the minimum wage and the eight-hour day.

As New York state’s secretary of labor from 1937 to 1943, appointed by Governor Herbert Lehman, Schneiderman campaigned for the extension of Social Security to domestic workers, for equal pay for women workers, and for comparable worth (giving women and men equal pay for different jobs that have comparable value). She lent support to union campaigns among the state’s increasing number of service workers: hotel maids, restaurant workers, and beauty parlor workers.

Schneiderman retired as WTUL president in 1950 and died in 1972, just as the second wave of feminism was emerging as a powerful political movement. It, too, had to deal with class and racial divisions among women, but its ranks soon included a vocal component of working women.

When women today assert “me too,” they should include Rose Schneiderman in their shoutouts.

This stoy was originally published on YES! Magazine.