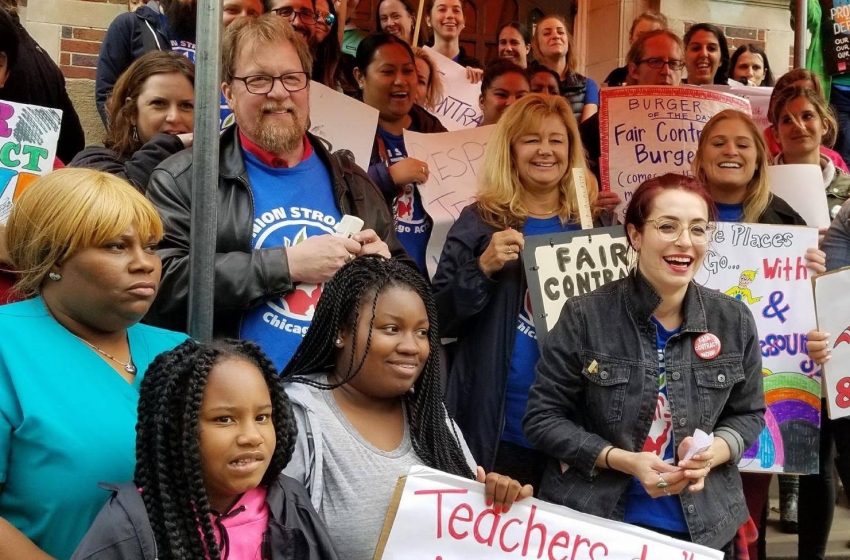 On Tuesday, teachers at 15 Chicago charter schools voted 98 percent to authorize a strike as they continue to bargain a contract with Acero Schools, the largest unionized charter network in the city. On Friday, four locations of the Chicago International Charter Schools (CICS) will take a strike authorization vote. And teachers at nine other Chicago charter networks are also in contract negotiations, and could similarly opt to take strikes votes in the coming months.

If no agreement is reached, Chicago could be home to the nation’s first-ever charter strike. Teachers have been inching closer to this possibility for the past two years, during which time eleventh-hour deals have narrowly averted strikes against at least three other charter operators.

That’s a stunning reversal from 2012, when Chicago charter operators bragged that, unlike unionized public schools, charters were unaffected by teacher strikes.

Since then, “Chicago has become the epicenter of charter union organizing in the country,” as Illinois Network of Charter Schools President Andrew Broy lamented in the Chicago Tribune last year.

What’s more, charter teachers are currently bargaining their first contracts as members of the Chicago Teachers Union (CTU), which also represents the city’s 27,000 public school teachers. In March, the Chicago Alliance of Charter Teachers and Staff, an affiliate of the American Federation of Teachers that represents more than 30 charters in the city, merged with the CTU in a bid to strengthen the hands of both unions.

“Our identity does not derive from our employer, it derives from our work,” says Chris Baehrend, the chair of CTU’s charter division. “I’m not a corporate representative, I’m a public educator.”

CTU-represented charter schools are trying a new tactic as they bargain with 11 different charter operators this fall. Instead of advancing a different set of proposals at each bargaining table, union negotiators across different charter networks are working from a set of common proposals hashed out within the union this spring, says Baehrend. The union even says it proposed that charter operators negotiate as a group, though this has not yet occurred to date.

One goal is to increase pay and benefits across the charter industry, where salaries and benefits are typically below those in Chicago Public Schools.

Jen Conant is a math teacher at CICS’ Northtown Academy, which in 2009 was among the city’s first charter schools to unionize. After seven years at the school, Conant says she makes less than her first-year counterparts at CPS.

Part of the problem is “bloat at the top” of charter networks, she says, including a top-heavy management structure and management fees paid by CPS to charter administrators. According to the union, the charter management organization fees paid to CICS rose to $4.5 million this year, up from $3.3 million last year.

In a statement released last week, CICS said that less than a quarter of the public funding it receives goes to management fees. The rest goes to cover rent, capital projects and repairs. (Another organization, Civitas Education Partners, is the direct employers of teachers at CICS schools.)

“CICS is troubled by CTU’s threatened strike and the obvious harm it will cause to our students and their families,” the statement reads. “Nonetheless, we remain hopeful that, through continuing good-faith negotiations, a strike will be avoided.”

In preparation for the strike vote, charter teachers have been wearing their red CTU shirts to school. The move is also an allusion to the nationwide “Red for Ed” movement demanding increased funding for public schools, says Conant. In addition to teacher pay and benefits, the union is pushing for guarantees that schools will be adequately staffed with counselors, social workers, school psychologists and nurses. If charter teachers are successful in winning contract guarantees for wraparound student services, it could have a ripple effect.

The charter union’s proposals also include additional resources for restorative justice and sanctuary policies to protect undocumented students and parents from immigration enforcement—the latter of which was borrowed from a Los Angeles charter school that developed protocol after a father was arrested by Immigration and Customs Enforcement while dropping his daughter off at school last year. These measures also go a step beyond those in effect in CPS schools, says Baehrend.

Ultimately, teachers say the goal of charter unions should be to force management to operate with greater transparency and accountability. Following a series of corruption scandals at UNO charter schools, the predecessor of Acero, some groups of charter parents have pushed for the establishment of local school councils—elected bodies that already have a role in governing public schools.

That’s the type of measure that unionized charter teachers might eventually be able to push for, says Baehrend. “Our goal is to fix this fundamental defect with charter operators—they receive public money, but there’s no accountability. We want to put the ‘public’ back into public charter schools, and make sure the public interest is actually represented.”