The Other Victims of California’s Fires: Workers Inhaling Toxic Fumes 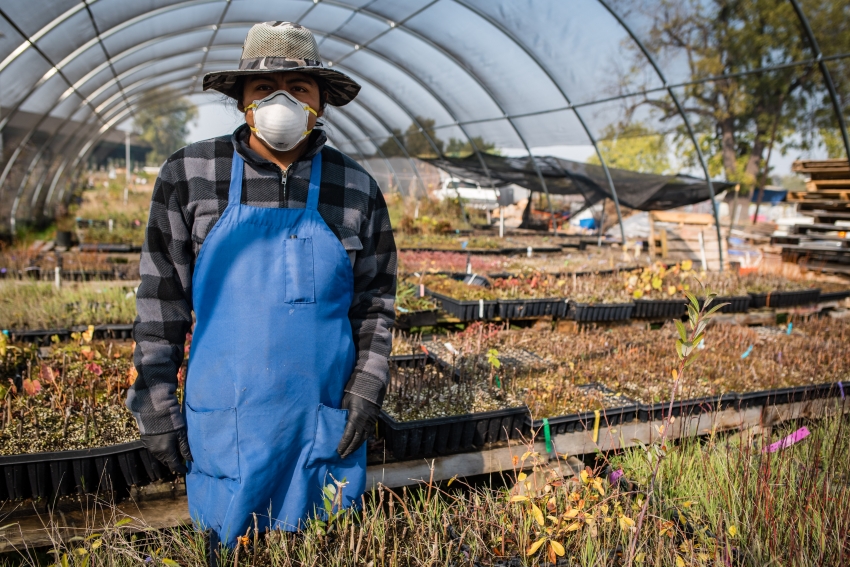 Cesar Fragoso, a landscaper at Planting Justice, tends to seedlings in the company’s nursery in Oakland, CA amidst the wildfire smoke. (Brooke Anderson)

With the death toll now standing at 42 and with some 7,200 structures destroyed, officials are now calling the wildfire in Paradise, CA (dubbed the “Camp Fire”) the deadliest and most destructive in California’s recent history. Two other massive fires—dubbed the Hill Fire and Woolsey Fire are simultaneously scorching Southern California.

As frontline firefighters—including many prison laborers—continue to battle the blaze while healthcare providers work around the clock treating fire victims, millions of other workers far away from the inferno are feeling a secondary impact: toxic smoke.

In the San Francisco Bay Area, over 160 miles away from the Camp Fire, air quality dramatically declined almost immediately after the fires broke out. Over the past week, AirNow, a government website reporting real-time air quality data has shown the Bay Area hovering between 150-200 on the federal Air Quality Index (AQI), surpassing 200 (or “very unhealthy” levels) in parts of the Bay. The higher the AQI value, the more polluted the skies are and the more concern there is for public health.

This week, the Bay Area also saw the second highest amount of fine particulate matter in the air ever recorded. This substance is not only made up of smoke from charred forests, but could contain everything that gets incinerated when residences go up in flames: cars, fuel, batteries, light bulbs, cleaning products, plastics, upholstery and more.

Public health officials have been advising residents of affected areas to stay indoors to avoid the unhealthy air that can lead to headaches, dizziness, shortness of breath, coughing, wheezing, eye irritation and worse.

However, for many workers who work outdoors for a living, that’s easier said than done.

While many white collar workers don protective masks to commute to office jobs where recirculated air conditioning provides some measure of protection from the smoky skies, hundreds of thousands of farmworkers, day laborers, landscapers, construction workers, public works employees and others have no choice but to work through the harmful haze—at great detriment to their health.

Many of these workers hail from neighborhoods and worksites already facing increased levels of toxins. Compounding the situation, these are also often the very same workers who are least protected by worker health and safety regulations.

“It’s been horrible,” says Kywanna Reed, who has been working 10-hour days outside this week as a traffic controller. “I wake up with headaches. I go to sleep with headaches. I have a headache right now, and a bag of headache medicine in the truck. My whole respiratory system is messed up. My coworker had a nosebleed and went home sick.”

“Employers should pass out masks and you could choose to wear them or not,” says Reed, “But right now, they’re not doing anything.”

Other workers, however, say their employers are providing masks while verbally encouraging workers to protect themselves.

Cesar Fragoso, who works as a landscaper for Planting Justice, said the non-profit nursery in East Oakland passed out masks to employees.

“I work outside every day, weeding and transplanting plants. I can feel the smoke in my nose. My eyes started itching. I’ve been coughing. The masks help, but it’s tragic that we have to go through this in order for people to acknowledge what we are doing to the environment,” says Fragoso.

A 2017 news release from the California Division of Occupational Safety and Health (Cal/OSHA) advises that “Employers with operations exposed to wildfire smoke must consider taking appropriate measures as part of their Injury and Illness Prevention Program under Title 8 section 3203 of the California Code of Regulations and as required under section 5141 (Control of Harmful Exposure to Employees).”

Those measures include “using a filtered ventilation system in indoor work areas,” “limiting the time that employees work outdoors” and “providing workers with respiratory protective equipment.”

However, as worker advocates note, holding employers accountable for taking such measures can be a challenge.

“Even though people we know from Cal/OSHA have made a tremendous effort, their presence in the field is so limited that it is really hard for them to do any kind of enforcement or implementation,” says Dinorah Barton-Antonio of the Labor and Occupational Health Program at UC Berkeley.

Other workers say they wouldn’t use a mask even it was provided, citing the already highly dangerous nature of their industries. Sixty-three-year-old carpenter Ruel Bernard smelled the smoke and started sneezing this week as he hung siding at a residential construction site, but chose not to wear a mask.

“Us older generation of construction workers, our bodies have been toxic waste dumps from the get-go. I started working in New York in 1971, breaking down plastic walls, climbing around in attics filled with insulation and dust. Every day I hurt myself at work, so at some point you’re just like ‘Fuck it,’” explains Bernard. “I know that’s a dinosaur, macho attitude. But that attitude helps us survive in this industry.”

The idea that the smoke from the wildfires is just one ingredient in an already toxic soup of working conditions resonates in farmworker communities.

Lucas Zucker is the Policy Director at Central Coast United for a Sustainable Economy (CAUSE), which works with immigrant farmworkers in Ventura and Santa Barbara Counties. During last summer’s wildfires, CAUSE distributed N95 masks to workers in the field.

“Farm work is already dangerous on the day-to-day. This area has some of the highest use of toxic pesticides,” notes Zucker. “But then with the wildfires, the ag industry pushes to harvest their crop quickly to prevent damage to crops like strawberries and avocados. So we actually see an increase in production, with obvious implications for human health. Whereas a white collar worker might be able to take time off and have that paid, for farmworkers who get paid piece rate it’s hard for them to take that time off if they’re already living paycheck to paycheck.”

While much of the conversation in the Bay Area about protection from the smoke has focused on masks, some workers point to having power on the job—whether that be in the form of a union contract or worker ownership—as one of the largest factors in ensuring worker health and safety.

“We have a union here. It helps us get through things like this because I feel like we have some camaraderie and I can take steps to take care of myself without worrying that I’ll lose my job,” says Daniel DeBolt, who works as a deckhand on the ferry boats that shuttle tourists and commuters from Oakland to San Francisco and who has been experiencing headaches and fatigue all week.

Worker power on the job was also key for Dante Ortiz from Root Volume, a worker-owned landscaping cooperative.

“In 20 years of building gardens in wildfire-prone areas like Colorado and California, I’d never had a day where we had to pull out because of air quality, but that happened last Friday. We were doing heavy excavation, trenching for retaining walls. It’s hard work. You’re breathing heavily, which is the worst thing you could be doing,” says Ortiz. “So we all decided it was time to get out of there. Being in a worker cooperative gave us the agency to make that decision for ourselves.”

However, other workers like day laborers don’t have stable employment or consistent employers.

According to Gabriela Galicia, the Executive Director of the Street Level Health Project in Oakland, CA, “Workers stand on the corner for up to eight hours a day waiting for work. Many corners are already near toxic fumes, and now workers are out in the smoke too.”

Galicia notes that many workers are already thinking about heading north in search of work rebuilding fire-devastated communities, which carries its own risks to workers’ rights and their health. Worker exploitation and wage theft has marred reconstruction in post-disaster recovery efforts across the country.

“We’ve seen too many natural disasters where day laborers have been taken advantage of,” says Galicia. “They are human beings. They’re helping to rebuild. Treat them with dignity.”

As human-driven climate change intensifies and more of California becomes engulfed in flames, workers wonder whether toiling in toxic air is becoming “the new normal”—or if there can be a just transition to a new way of relating to land and labor.

CAUSE’s Lucas Zucker explains, “Ultimately, we need state or federal disaster aid that can fill in the gaps for workers exposed to disaster or toxic conditions so that they don’t have to make that horrible choice between putting food on their family’s table or being exposed to toxic conditions.”