Pennsylvania Workers Are Waging the Biggest U.S. Manufacturing Strike in the Trump Era 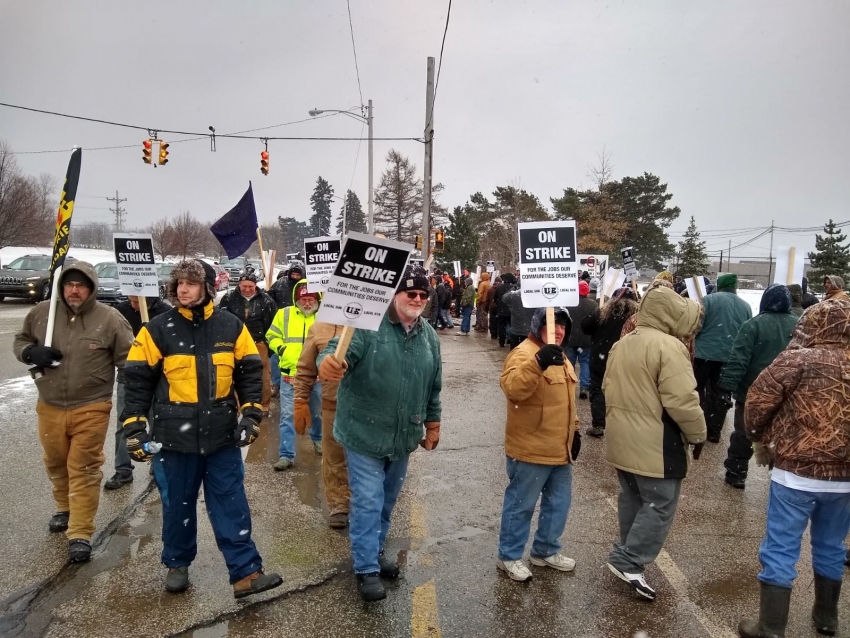 On February 26, nearly 2,000 members of the United Electrical, Radio and Machine Workers of America (UE) walked off their jobs at a longstanding locomotive manufacturing plant in Erie, Pennsylvania, in the largest U.S. strike in the manufacturing sector since 2016. The move came just one day after the plant began operating under its new owner, the Wabtec Corporation of Wilmerding, Pennsylvania.

In 2018, Wabtec merged with GE Transportation, a division of General Electric that has operated a locomotive plant in Erie for more than 100 years. UE members have had a contract with GE since 1938, according to union spokesperson, Jonathan Kissam, and that contract has provided generations of Erie residents with what Kissam says are “good, Rust Belt jobs.”

Those jobs have afforded the plant’s employees a more stable lifestyle, with wages that average $35 per hour, and a Monday through Friday work schedule that Kissam says has allowed UE members to be active participants in life outside of the plant. “Our members are very involved in the Erie community as Little League coaches, at churches and with veterans' causes,” Kissam asserted in an interview with In These Times.

It is this quality of life, and this connection to the broader Erie community, that UE members are trying to protect for themselves and future generations by going on strike, Kissam says.

That’s because the plant’s new owners, Wabtec, has declined thus far to honor UE’s contract with GE—even on a temporary, 30-day basis, as proposed by the union. The company has, instead, tried to impose immediate changes to employees’ working conditions. Those changes include a proposal for wage cuts of up to 38 percent for new hires and recalled workers, creating what union representatives such as Scott Slawson, president of UE Local 506, have called a “permanent second tier of lower wages.”

Kissam recalls observing a recent UE member meeting. When participants were asked how many had parents or children who also worked at the locomotive plant, many hands shot up. These strong family ties make UE members especially averse to any two-tier wage proposal, in Kissam’s view, because “they see two tiers as selling out their own children and the Erie community.”

A Huffington Post article noted that this fear is justified. “Unions are leery of two-tier systems for good reason,” Dave Jamieson reports. As well-paid, older workers retire, they are then replaced with less established employees who “know they’ll never make the same money as their veteran counterparts.” This has the potential to create discord within the union, an issue Jamieson says has reared its head in other recent, large scale union negotiations.

Brad McCurdy is a licensed journeyman electrician who has worked at the Erie manufacturing plant for the past 14 years. As a UE member, he tells In These Times he is feeling both pride and kinship while on strike, as well as fear for the outcome.

Regarding Wabtec’s reluctance to agree to a 30-day extension of UE’s current labor contract, while also demanding what he sees as “major concessions” around wages and benefits, McCurdy does not mince words: “This is corporate greed and union-busting 101.” He points to Wabtec’s significant profit margins and insists that the union’s willingness to strike is “directly tied to preserving jobs for our community, and preserving family-sustaining wages.”

In a February 26 opinion piece  published in the Erie Times News, Greg Sbrocco, the manager of Wabtec’s manufacturing plants, sought to justify lower wages by claiming they are a “standard practice by U.S. manufacturing companies to aggressively compete with competitors in low-cost countries like China or Mexico.” Yet, Wabtec is a highly profitable corporation whose sales are expected to shoot north of $9 billion in 2019, according to recent news reports.

Wabtech CEO Raymond Betler also netted a compensation package worth $3.5 million last year, according to a statement put out by Vermont senator and 2020 presidential candidate, Bernie Sanders. Sanders has offered support for the striking UE members by insisting that “corporate executives must not use the merger between GE and Wabtec to hurt workers.” Other news sites have made note of the fact that this merger was an $11 billion deal.

Kissam argues that the Erie plant is a prime example of what happens when corporations seek out lower wages in an attempt to compete with what Sbrocco calls “low-cost countries.” In 2011, while GE Transportation still owned the Erie plant, the company moved hundreds of jobs to a new locomotive manufacturing site in Fort Worth, Texas, a right-to-work state where unions have little power.

In 2017, GE Transportation then announced plans to close the Erie plant altogether and move all locomotive manufacturing jobs to the non-union Fort Worth site. These plans were then scuttled as GE Transportation sought to sell off its transportation division instead. Union leaders, however, allege that the attempt to move all manufacturing jobs to Texas backfired as company managers realized that building a large locomotive is not simple and, in fact, requires the kind of highly skilled, permanent workforce the Erie plant provides.

As a 2018 Erie Times-News article states, GE Transportation has been a successful operation, with customer orders and company profits piling up. This point was echoed in a February 20 press release from UE, which stated that, “GE Transportation has consistently earned profits of over 16 percent for the last five years, driven by the skilled work done by UE members at the flagship plant in Erie.”

Kissam maintains that UE members were optimistic when Wabtec bought out GE Transportation in 2018. Relationships with GE leadership had become rocky, he says, and workers were hopeful about being under Wabtec’s umbrella, since the company seemed likely to be more stable and less in the business of shaking up operations than GE had been. Right from the start, however, UE leaders accused Wabtec of refusing to negotiate in good faith.

“Wabtech told us their terms and conditions in December,” Kissam says, but “serious negotiations” did not start until earlier in February. Members quickly objected to Wabtec’s insistence on such things as “mandatory overtime and arbitrary schedules,” says Kissam. When Wabtec took over plant operations on February 25, the plant’s workers decided to walk off the job rather than bend to the new owner’s conditions.

Wabtec has maintained that its proposals are reasonable, forward-looking and competitive for the region.

“People would rather work than be on strike, but they’re not willing to hand every aspect of their life over to the boss, and they’re not willing to create a permanent underclass of low wage workers,” Kissam insisted. He also notes that the strike comes at a time of renewed public support for labor rights. “I think UE members also have a sense that there is a greater willingness to fight among workers more broadly,” thanks in part to what Kissam calls “the success of the recent teachers strikes.”

So far, there are no new contract talks scheduled for Wabtec and UE, meaning there is no clear end in sight to the strike. For McCurdy, the fight is clear. Wabtec is making millions, he says, "while asking us to make concessions. This is dirty pool.”