After Janus, Cities and Towns Are Poised to Become the New Battleground Over “Right to Work” 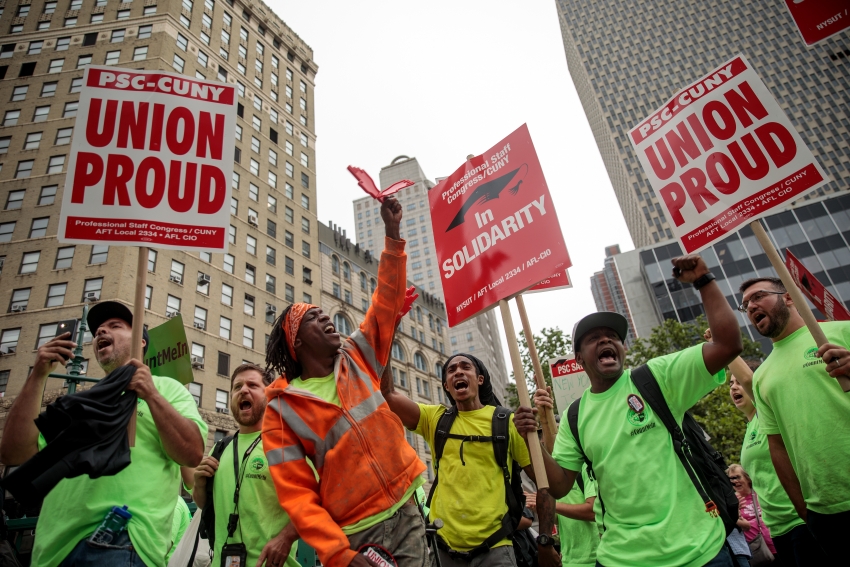 In December 2015, Lincolnshire, Illinois, a Chicago suburb with a population of a little over 7,000, passed a right-to-work (RTW) ordinance. While a slim majority of states have enacted RTW laws over the past several decades, RTW measures at the county or municipal level are rare in comparison. A group of unions quickly sued to strike down the ordinance, and after nearly three years of litigation, the next stop for the legal battle might be the Supreme Court.

The unions have been successful so far in their fight against the ordinance, winning first in the U.S. District Court and then again after Lincolnshire appealed to the Seventh Circuit Court of Appeals. But on February 14, Lincolnshire filed a petition with the Supreme Court, which will now decide whether it will hear the village’s appeal. Lincolnshire is being represented in the lawsuit by the Liberty Justice Center, one of the groups that represented plaintiff Mark Janus in Janus v. AFSCME, the case that abolished public-sector fair-share fees nationwide.

The legal arguments in the case, which is named Village of Lincolnshire v. IUOE Local 399, are not particularly complicated. The National Labor Relations Act (NLRA) clearly allows employers and unions to enter into union security agreements, which require workers to pay union dues (or reduced “fair-share fees” for non-members). However, a provision in the 1947 Taft-Hartley Act allows states to pass RTW laws, which permit workers to refuse to pay union dues while still enjoying all of the benefits of union representation. The unions argue that the Taft-Hartley provision means what it says—that states can pass RTW laws, not counties or cities. Lincolnshire argues that the law’s reference to “states” actually includes states and their subordinate political bodies.

Allowing local RTW ordinances could lead to what the unions described in their Seventh Circuit brief as a “crazy-quilt” of overlapping and inconsistent regulations. Illinois alone could be home to more than 300 different RTW ordinances among counties and municipalities with home rule authority. And numerous different laws could apply to the same collective bargaining agreement, as agreements commonly cover multiple facilities or job sites.

There is reason to suspect that the Supreme Court will decide to hear Lincolnshire’s appeal. The Seventh Circuit’s decision in favor of the unions conflicted with a 2016 decision of the Sixth Circuit, UAW Local 3047 v. Hardin County, which held that counties and municipalities have the legal authority to enact RTW measures. The Supreme Court will often hear an appeal to resolve this kind of conflict, which is called a circuit split. Troublingly, the Supreme Court refused to hear the UAW’s appeal of the Sixth Circuit decision, leaving that decision as law of the land in Michigan, Ohio, Kentucky, and Tennessee, and potentially tipping the justices’ hands on the issue.

In Janus, the right-wing majority of the Supreme Court overturned more than 40 years of precedent to make the country’s entire public sector RTW. There is no reason to expect Justice Kavanaugh to be any more sympathetic to labor rights than now-retired Justice Kennedy. If the Supreme Court decides to hear the case, it may well be the next step in the steady erosion of labor rights that has occurred under the Roberts Court.

Meanwhile, local RTW laws have started to spread elsewhere. Lobbying efforts by the Koch-funded Americans for Prosperity have made quick progress in New Mexico, with 10 of the state’s 33 counties and one village passing RTW ordinances since January 2018. The group previously used the same county-by-county approach in Kentucky, where over a dozen counties passed RTW ordinances before statewide RTW legislation passed in 2017.

In Delaware, attacks on unions at the local level have been less successful. In late 2017 and early 2018, two local governments in the state were considering RTW measures. While a proposal in Sussex County eventually stalled following union protests and warnings from the Delaware Attorney General and the county’s own attorney that the county lacked the legal authority to enact the proposal, the town of Seaford quietly enacted a RTW ordinance without holding any public hearings. The Seaford ordinance was quickly quashed in June 2018 when Governor John Carney signed legislation permitting private union security agreements statewide.

Local RTW laws have been slow to spread in part because local governments like Sussex County fear that they violate the NLRA. But with union busters running out of states in which they could realistically seek to pass RTW laws, they have looked to local RTW laws as a way to make inroads into non-RTW states. If the Supreme Court gives local RTW laws their blessing, the significant legal risks will be removed and right-wing groups will begin pushing them on counties and towns throughout the country.

What can the labor movement do in the meantime? One strategy is legislative. In states where Democrats hold the governorship and the majority in both state legislatures, we can push politicians to follow the Delaware approach and enact laws guaranteeing the right to enter into union security agreements. But even after significant Democratic gains in the midterm elections, there are only 13 of these states other than Delaware.

Another strategy is for private-sector unions to conduct vigorous internal organizing campaigns as public sector unions did in preparation for Friedrichs v. CTA and then Janus. Unlike public-sector unions, private-sector unions do not have onerous restrictions on the subjects over which they can collectively bargain, which many public sector unions have been forced to deal with in recent years. These campaigns to increase worker participation in existing unions and to sign up fair-share-fee payers as full members will prepare unions to contend with local RTW laws in unexpected locations, while also building stronger unions if we are fortunate enough to avoid another attack from the Supreme Court.

Nick Johnson is a union lawyer in New York City.