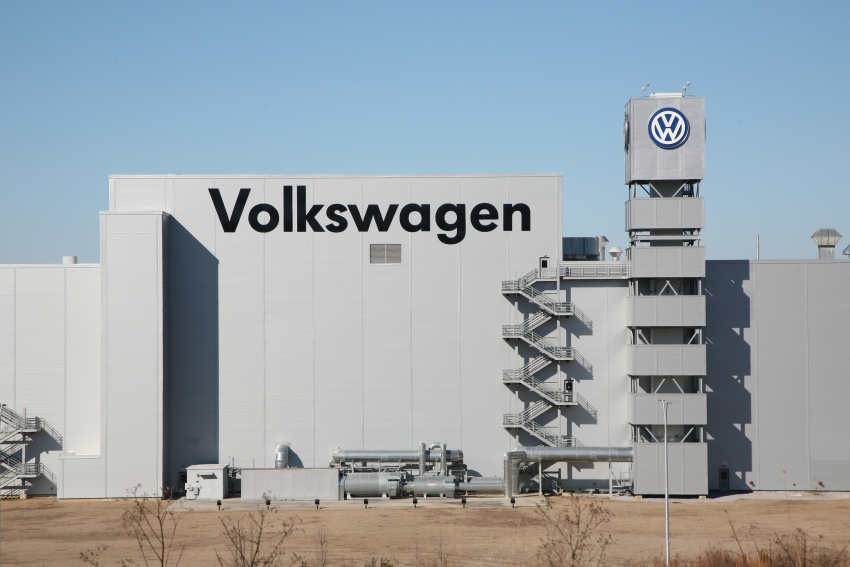 The Volkswagen plant in Chattanooga, Tennessee pictured in January, 2015. ( assembly plant with the introduction of the new Cross Blue SUV. (James R. Martin/shutterstock.com)

In the lead-up to another United Automobile Workers (UAW) vote at Volkswagen in Tennessee, the region’s paper of record is once again providing tacit aid to anti-union efforts.

On Tuesday, the Chattanooga Times Free Press (CTFP) published an article announcing that the UAW had filed for another union election in the Chattanooga plant. The article quotes Patrick Semmens, vice president of the National Right to Work Legal Defense Foundation (NRTWLDF), which—for six decades—has been a  leading advocate for the destruction of public and private sector unions. In the article, Semmens says the NRTWLDF represented Volkswagen workers in 2014 to “protect their rights”—and then announces that the organization is willing to provide free legal representation to anti-union Volkswagen workers again.

The following day, the CTFP published another article that extensively quotes Semmen’s colleague John Raudabaugh—a high-paid NRTWLDF staff attorney who was actively involved in the organization’s 2014 campaign against the UAW.

In both articles, the CTFP quotes NRTWLDF employees talking about the ongoing corruption scandal in the UAW, but omits the employer’s own criminal behavior. In 2016, the National Labor Relations Board issued a unanimous decision that Volkswagen was violating federal labor law by refusing to negotiate with the skilled-trades unit that the UAW had successfully organized in 2015.

Additionally, the paper fails to provide any basic information about unionization, such as the fact that union workers enjoy a higher median weekly income and more paid vacation holidays than non-union workers and are more likely to have a defined benefit pension plan. Union employers, meanwhile, contribute more to cover the costs of healthcare benefits.

This information should be of value and interest to CTFP readers, since they live in a state with one of the lowest union density rates and highest levels of poverty.

Again and again, the CTFP relies on the NRTWLDF as a sounding board for anti-union talking points while failing to provide crucial background information on the NRTWLDF’s political agenda, finances or connections to a business-backed network of anti-worker organizations.

These articles are the most recent examples of a long-running pattern of anti-union bias at the CTFP— and such biased reporting only adds to the challenges that the UAW faces in the lead up to the union’s third representation election at Volkswagen in about five years.

A 2014 analysis of regional news coverage by Media Matters for America found that both the CTFP and the Knoxville News-Sentinel were "omitting critical context in their coverage of the union vote" and thereby "aiding these antiunion efforts.” The analysis showed that in at least 25 news reports the CTFP published in the month leading up to the union election, “not one of those reports acknowledged that unionization enjoys majority support among the Volkswagen workers.”

Those aren’t the only crucial facts that the CTFP has been omitting in its reporting on the union drive.

Both Semmens and Raudabaugh have spent years working for the NRTWLDF, an arm of the National Right to Work Committee (NRTWC).

A 2014 exposé on NRTWC and NRTWLDF by the Center for Media and Democracy, an award-winning investigative watchdog group, described the organizations as "a powerful instrument of the corporate and ideological interests that want to keep wages low and silence the voice of organized labor in the political arena." The exposé details the enormous financial resources that are funneled to both organizations from billionaires, like the Koch brothers and the Walton family, through their dark money foundations and nonprofits.

Additionally, NRTWLDF is also an affiliate member of the State Policy Network, a national web of corporate-financed “think tanks” that drive an extremist right-wing policy agenda in state governments throughout the country.

Yet, this vital background information is missing in CTFP reporting, and not just when quoting NRTWLDF employees.

The paper wrote a story in 2013 detailing how the NRTWLDF launched an outreach campaign to Volkswagen workers “on Facebook, offering free legal aid if they're feeling pressured to join the UAW”—and detailing how “employees who feel pressured can request free legal aid from the foundation by calling or going to its website.” This story failed to provide any context for why the NRTWLDF was involving itself in the organizing drive, who was funding it, and what their political agenda is.

The same is true for other stories that centrally focus on NRTWLDF efforts in Chattanooga, such as a 2014 story detailing the organization’s filing of a complaint with the Department of Labor against German labor unions allied with the UAW—and a 2015 story highlighting the organization’s criticisms of the UAW’s skilled trades election at Volkswagen.

Time after time, the paper has reported on NRTWLDF activities while conspicuously omitting any substantive background information about the organization.

“Noting the ties between NRTW and the wider right-wing movement and, more importantly, the funding behind NRTWC and NRTWLF is incredibly important in reporting on their activities,” David Armiak, a researcher and writer at the Center for Media and Democracy, tells In These Times. “NRTWC and NRTWLDF are funded to attack workers’ rights. This is central to the mission of the organizations.”

In the case of Raudabaugh, the CTFP has attempted to paint him as a disinterested labor expert, not as a paid anti-union operative.

It does this by centrally characterizing Raudabaugh as a former National Labor Relations Board member and university professor, providing the misleading impression that he is a neutral authority on unions rather than the longtime employee for a nationally recognized union buster.

As I documented in a 2015 story for the Institute for Southern Studies, from August 2013 to November 2015 the CTFP printed 16 stories that quote Raudabaugh. Eleven of those stories failed to mention that he is a staff attorney for NRTWLDF. Coincidentally, on the very day that the report came out, the CTFP printed another story quoting Raudabaugh, again omitting the fact that he is a NRTWLDF staff attorney.

The most recent CTFP article quoting Raudabaugh does eventually mention that he is "also an attorney for the National Right to Work Foundation," but like most of the other articles involving NRTWLDF, the paper fails to provide any information about the organization’s agenda or funding sources.

Even more disturbing, the story fails to mention that Raudabaugh was one of NRTWLDF’s attorneys providing free legal representation to anti-union Volkswagen workers in 2013 and 2014. Far from being a disinterested expert, Raudabaugh was intimately involved in the broader campaign by third-party groups to keep workers in Chattanooga from unionizing.

Soliciting and then providing direct legal assistance to the union's opposition at Volkswagen should qualify as important information when evaluating the opinions of someone like Raudabaugh, but such omissions are common for the CTFP.

Up to old tricks

The CTFP masthead displays the motto, “To Give the News Impartially, Without Fear or Favor.” But the paper has routinely carried water for NRTW, as it did in Tuesday’s article, when it broadcast the group’s call for anti-union workers to contact them for free legal representation—effectively serving as the kickoff announcement for the renewed anti-union campaign.

“NRTWLDF’s call for workers to contact them for ‘free legal assistance’ is part of a national strategy to attack workers’ rights through litigation. In other words, the legal assistance is in no way free,” Armiak said. “It comes at the expense of one’s right to unionize and, by extension, one’s right to a livable wage, healthcare, paid leave, a safe and healthy work environment, and many other things unions collectively fight for.”

The 2014 UAW election in Chattanooga was a nail biter, and the union lost by a narrow margin. The UAW had to not only face down out-of-state hired guns like NRTW, but Tennessee’s Republican-dominated political establishment, powerful business community, and a hostile local media that failed to disclose pivotal information about who was behind the broad anti-union campaign that mired the city.

The UAW has requested that the union election be held on April 29 and 30. As the union organizing drive heats up, workers hoping for a fair shake in the media will have to look to news outlets other than the CTFP.

“If a journalist or news outlet chooses not to characterize an anti-worker organization such as NRTWC or NRTWLDF as such, or if it chooses not to inform readers of their funding sources, then it is certainly pro-business and anti-worker,” said Armiak.