Angry About Low Pay and Sweltering Heat, These Amazon Warehouse Workers Are Organizing 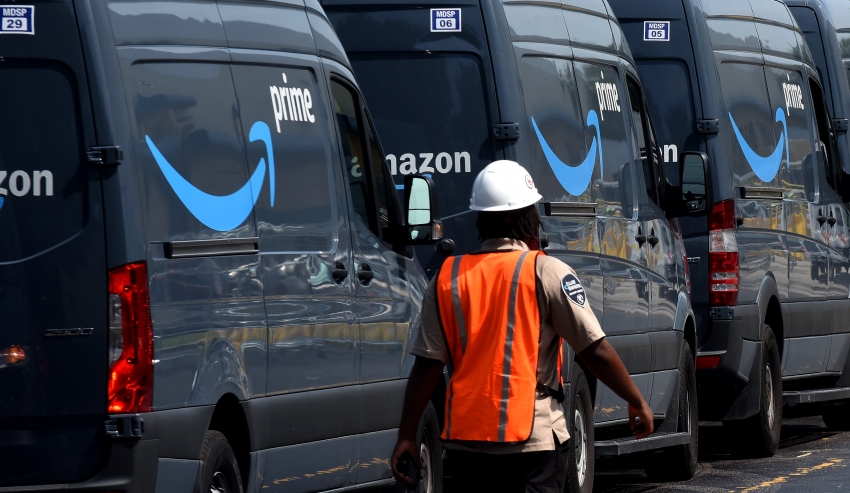 Amazon vans line up at a distribution center to pick up packages for delivery on Amazon Prime Day, July 16, 2019, in Orlando, Florida. (Photo by Paul Hennessy/NurPhoto via Getty Images)

Thousands of Amazon workers struck on “Prime Day” this week in what was perhaps the largest multinational action to date against the online behemoth. European Amazon employees have been waging coordinated strikes against the company since 2013, but this time they were joined by U.S. counterparts at a Shakopee, Minnesota fulfillment center, where workers staged a first-of-its-kind six-hour work stoppage. To date, Amazon has successfully fended off all attempts at unionization in the United States since the company’s founding in 1994.

Meanwhile, at another U.S. Amazon facility in Chicago, a new organizing effort is underway. Early Tuesday morning, a group of 30 workers at the company’s DCH1 delivery station on the city’s South Side staged a “walk-in” to the facility’s management during a 2:30 a.m. break on the overnight shift.

The group delivered a list of demands to site management that included a pay bump, health insurance and functioning air conditioning in the facility, where workers say they are laboring in sweltering heat.

The DCH1 delivery station is the last place that Amazon parcels arrive before reaching the doorsteps of Chicago-area customers. Workers scan and sort at a grueling pace inside a building with a metal roof and walls, and towers of packages often block ventilation from overhead fans. The workforce includes seniors and people with medical conditions such as diabetes, and dehydration and heat stroke are frequent problems, according to four employees at the facility who spoke to In These Times on condition of anonymity.

Last month, when a small fire broke out in the facility, managers told workers not to leave their stations, according to one of the employees. No one was injured, but the incident stoked anger.

DCH1 Amazonians United, which has launched a public Facebook page, says workers decided to take action on Prime Day in part after hearing about Minnesota workers’ plans to strike. At present, the workers are not affiliated with any union or community organization.

They’re also building off a successful action this spring, when about 140 employees—roughly a quarter of the workforce—signed a petition demanding adequate access to drinking water at the facility. Managers had stopped providing workers with water bottles, and five-gallon water jugs weren’t being replaced throughout the day, says Terry Miller (a pseudonym), who has worked at the facility for four and a half months.

During his second week on the job, he remembers, a coworker passed out from dehydration.

But as soon as workers delivered the petition in May, a manager went out and bought water bottles, says Miller. Shortly after that, water stations were installed.

“Ever since then, people saw that if we move, if we demand our rights, we can win,” says Fred Brown (a pseudonym), another Amazon employee who began working at the facility in 2017.

After circulating a survey to determine which issues fellow employees cared most about, workers decided to stage another action for Amazon’s highly publicized July Prime day. Apparently short-handed during this peak week, the facility has been offering employees a pay bump to come in an hour before their regular shift is scheduled to start—they receive $18, rather than the usual $15, but only for the extra hour.

DCH1 Amazonians United is demanding “prime pay for Prime days,” or $18 an hour throughout “blackout periods” when workers aren’t permitted to schedule time off and are handling a high volume of packages as a result of the company’s promotions.

Employees received a pay bump as part of a much-touted decision by Amazon CEO Jeff Bezos to raise the starting wage to $15 an hour. The announcement came after years of criticism from labor, as well the “Stop Bezos Act” introduced by Bernie Sanders that would have penalized large employers that pay low wages.

But employees at the DCH1 facility typically have their hours capped at 28 a week, and many still struggle to pay their bills, says J.R. (a pseudonym). After working a homecare job during the week, on the weekends he pulls three overnight shifts at the Amazon facility and then reports for a childcare job with just a few hours of sleep in between.

In a statement e-mailed to In These Times, an Amazon spokesperson said that the company is “proud to offer great employment opportunities with excellent pay, benefits, and a safe workplace for our people.”

The spokesperson did not respond to In These Times’ questions about the facility.

Employees who spoke with In These Times say that in addition to low pay, workers are dissatisfied with the lack of health benefits. According to the workers, they receive some vision and dental benefits, but in lieu of health insurance they are encouraged to call a health hotline number.

In the past year, Amazon has more than doubled the rate at which workers are expected to scan packages at the facility, say the employees, who also complain of seemingly arbitrary write-ups and firings. One of the workers says he was written up after a manager accused him of scanning a package incorrectly two months after the fact.

An investigation by the Verge this spring revealed that Amazon automatically tracks its employees’ productivity and may fire as much as 10 percent of its workforce annually for failing to meet internal targets.

After presenting their list of demands on Tuesday, the DCH1 workers say they were promised a meeting with the site manager that has yet to occur. They are circulating a public petition to demand the meeting.

In the meantime, Brown says that news of Tuesday’s action is reaching more coworkers. “You can feel the shift in power,” he says.

Amazon opened the DCH1 facility in Chicago in 2015. “I always say, they came to the wrong city,” says J.R. “Chicago is known for unions, so you can only get away with it for so long.”