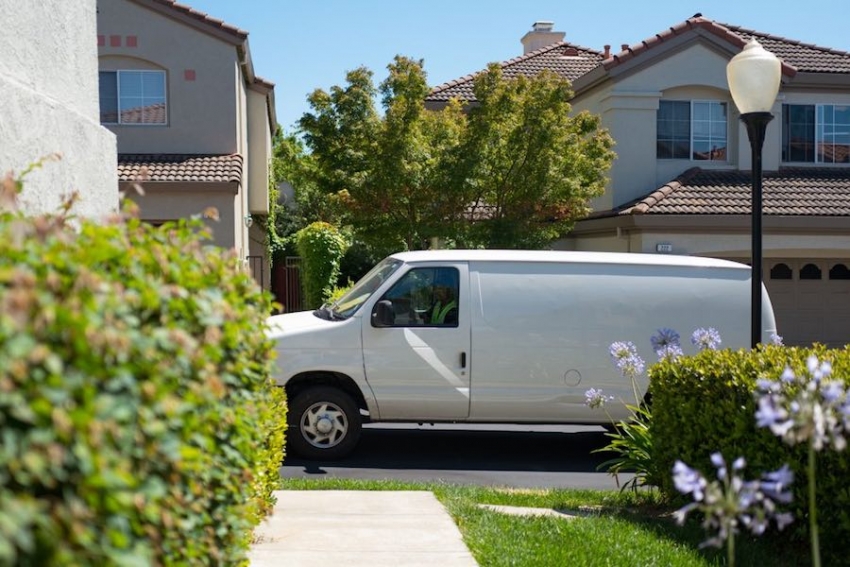 Amazon.com delivery contractors like this one won't be eligible for Amazon's new $15 base wage, and many report wage theft and poor working conditions. (Photo by Smith Collection/Gado/Getty Images)

Amazon’s announcement raising its entry-level wage to $15 an hour for all employees has been lauded as an inspiring example of corporate responsibility. In response to sharp criticism and threatened legislation from Sen. Bernie Sanders (I-Vt.) over low pay and horrid conditions at Amazon warehouses, CEO Jeff Bezos said: “We listened to our critics, thought hard about what we wanted to do, and decided we want to lead.”

But thousands of workers delivering your Amazon packages won’t be eligible for that $15 entry-level wage. Across the country, thousands of workers wear Amazon uniforms, use Amazon equipment, and work out of Amazon facilities, but are not classified as Amazon employees. They work for third parties known as delivery service partners (DSPs). It’s just one way Amazon manages the burden of getting billions of packages each year into the hands of its customers.

Amazon has confirmed that these third-party DSPs are not covered by its new wage standard.

Not only will drivers delivering for Amazon be deprived the pay levels of other Amazon employees, but in one notable instance, they were cheated out of wages by a DSP that violated state and federal labor laws.

A federal judge ruled in August that as many as 757 hundred delivery drivers with one DSP on the East Coast were robbed of overtime pay through falsifying time sheet records. The workers have thus far been unable to collect the back pay—potentially millions of dollars— from the DSP or Amazon.

And workers at other Amazon DSPs describe similar practices. So while Amazon basks in favorable PR, it is simultaneously deeply implicated in routine wage theft.

“The face of Amazon.com"

Tyhee Hickman of Pennsylvania and Shanay Bolden of Maryland, lead plaintiffs in the U.S. District Court lawsuit, worked for TL Transportation, a Mid-Atlantic regional delivery service. According to the lawsuit, TL literally calls its delivery drivers “the face of Amazon.com,” but those workers are not considered Amazon employees.

Hickman and Bolden’s stories make clear, however, that TL Transportation is merely a pass-through for Amazon. Hickman writes in a sworn statement that he was hired by TL in November 2016, only to report to Amazon’s warehouse in King of Prussia, Penn. for training. The trainer was an Amazon employee. All training materials included Amazon logos. Workers had to purchase and wear Amazon hats, shirts and jackets. Delivery vans had “Amazon” emblazoned on the side, and workers also used an Amazon proprietary device called a “Rabbit” to track routes and scan packages. The Rabbit can also call Amazon customers if they are absent during delivery.

According to Bolden, who worked out of Baltimore, Amazon assigned the routes, and drivers were supposed to call Amazon if they ran into difficulties with deliveries. But despite all this involvement, pay stubs reviewed by In These Times listed the employer as TL Transportation.

“People assume they’re interacting with an employee of a company if they’re wearing the company’s uniform,” says Celine McNicholas, director of labor law and policy at the Economic Policy Institute. “But the web of contracting makes it difficult to discern.”

That TL Transportation subjected employees to wage theft isn’t really in doubt. In a sloppy, misspelled flyer (“WELCOM ABOARD, WE LOOK FORWARD TO WORKING WITH YOU”), employees were told that they would be paid “$160.00 per day based on 8 hrs regular and 2 hours overtime… if you finish early you will be paid of entire day.”
In other words, the time sheet would build in two hours of daily overtime, regardless of hours worked. Pay stubs reflected that. Falsifying time sheets in this manner is definitively illegal, as U.S. District Court Judge Gerald McHugh confirmed in his ruling against TL in August. “Overtime compensation must be specifically linked to the hours an employee actually worked,” McHugh writes.

TL kept to this day rate, with the built-in overtime, regardless of how many days an employee worked. One of Bolden’s pay stubs showed a week where she worked all seven days, with 56 hours at the regular rate and 14 hours of overtime. She should have received 30 overtime hours that week.

In theory, workers could hope to finish deliveries early, earning the $160 day rate for less than 10 hours of work. But that was a pipe dream. Three workers who made sworn declarations and another interviewed by In These Times stated that they always worked more than 10 hours in a day, but were not paid additional overtime.

Hickman stated he would arrive to the Pennsylvania warehouse at 6 a.m. on workdays, attend required meetings with self-identified Amazon personnel, and not leave the warehouse until 9:30. That left him six and half hours to complete his delivery runs of 165 to 200 packages, sometimes as far away as Delaware. If Hickman brought back packages as undeliverable, he was sent back out to re-deliver them, adding more time to the day. Workers also had to inspect delivery vans on exit and re-entry and refuel them at the end of the day. Hickman testified he would usually return to the warehouse at 7:00 p.m., 13 hours after he arrived for work.

A former employee interviewed by In These Times on condition of anonymity, because he has not yet been deposed in the case, described how difficult it was to complete the runs: “It was like running, running, rushing, rushing,” he said. “If you don’t keep going you can’t finish in time.”

To keep up with the demanding schedules, workers were unable to fit in lunch or rest breaks; Hickman testified to having to urinate into bottles or on the side of the road to keep things moving. If workers did miraculously complete routes early, managers sent them back out to “rescue” other delivery drivers, by taking some of their packages. Regardless of the total hours worked in a week, the flat rate never changed.

The job was described as difficult, with rampant turnover. Hickman lasted five months; Bolden lasted seven. The former employee only lasted three. “I lost weight dramatically,” he says. “My wife told me, ‘You look so skinny.’”

These workers’ stories are broadly consistent with an investigation by Business Insider, which interviewed over 30 drivers with Amazon DSPs. But unlike other DSPs, TL Transportation never had workers sign contracts with a mandatory arbitration agreement, blocking their right to sue. Because it failed to do so, the plaintiffs sought lost and stolen wages in federal court.

Employers steal roughly $8 billion from worker paychecks per year, according to a 2017 study from the Economic Policy Institute. But winning a wage theft ruling through summary judgment without trial, as the TL delivery workers did in August, is exceedingly rare.

Despite the court victory, no worker has yet been paid. TL, which continues to operate, says it lacks the funds to pay above the day rate. Amazon claims it has nothing to do with TL’s labor practices. Plaintiffs continue to battle it out in federal court.

TL’s co-owners Scott Foreman and Herschel Lowe, both named as defendants in the complaint, did not return phone messages asking for comment.

A second lawsuit, against a DSP named NEA Delivery, was filed in August in California, joining prior suits in Illinois, Washington state and Arizona. But because every DSP is different, plaintiffs’ attorneys must go individually, company by company, to seek restitution for wronged workers. This has the added benefit of preventing Amazon delivery personnel from unionizing across the sector. Amazon has a longstanding policy of not commenting on pending litigation.

“This is nothing unique” among large corporations, said EPI’s McNicholas. “The reason companies do it is that it complicates the worker’s ability to hold their employer accountable.” In Amazon’s case, instead of offering a base wage of $15 an hour and a suite of benefits, it simply hires couriers like TL Transportation at a set rate per delivery and pleads ignorance about violations of labor law. The workers end up stuck, unable to win money owed them from fly-by-night third parties, and unable to challenge the corporate giant whose packages they actually deliver.

EPI’s McNicholas lays blame for the wage theft at the feet of Amazon, for setting up a system of free, rapid shipping. “It’s very difficult for these subcontracting firms to do business if they’re not cutting corners,” she says. “Amazon may say they set loose terms, but they’re instituting the framework that the subcontracting firms have to honor.”

Amazon outsources to hundreds of DSPs and encourages new delivery start-ups, promising that they can get to work within weeks and make up to $300,000 per year. “Logistics experience not required,” the company states on its website. Amazon has also tested several other systems for package delivery, from using the U.S. Postal Service, private competitors like UPS and FedEx, or an Uber-like system called Amazon Flex, where individuals sign up to deliver packages with their own cars.

None of these involve employees of Amazon, and all have come under scrutiny. Postal workers have complained about onerous package loads and weekend deliveries. Labor attorney Shannon Liss-Riordan sued Amazon in 2016 for failing to ensure that Amazon Flex workers earn the minimum wage after accounting for vehicle and maintenance costs, as well as not paying overtime. The case remains pending.

Since the $15 wage announcement, Amazon has been criticized for offsetting the pay increase by removing stock awards and bonuses. Others have characterized the wage hike as a way to avoid unionization at Whole Foods, or an impetus to eliminate workers through automation. But the third-party hustle is a far more efficient way to avoid raising wages, while pushing off liability for labor practices to other companies.

The plaintiffs in the TL Transportation case have named Amazon as a defendant, arguing that the company “control[s] the work activities, condition, and management” of the DSPs and their employees. But this bumps up against the “joint employer” standard set by the National Labor Relations Board (NLRB) under Obama, whereby companies are jointly liable for labor law violations by their franchisees, suppliers or contractors if they have indirect influence over the terms of employment.

Trump’s National Labor Relations Board has proposed narrowing the joint employer definition to companies that exercise “substantial, direct and immediate control” over hiring, firing, discipline and supervision. That would still seem to apply to Amazon, but it’s a close call. And courts typically follow the NLRB, which under Trump isn’t exactly worker-friendly.

If the courts agree that Amazon is not a joint employer, it would have a path to keep tens of thousands of delivery workers outsourced and removed from its new wage standards, without sacrificing the significant publicity benefits of the announcement. It’s good work if you can get it.