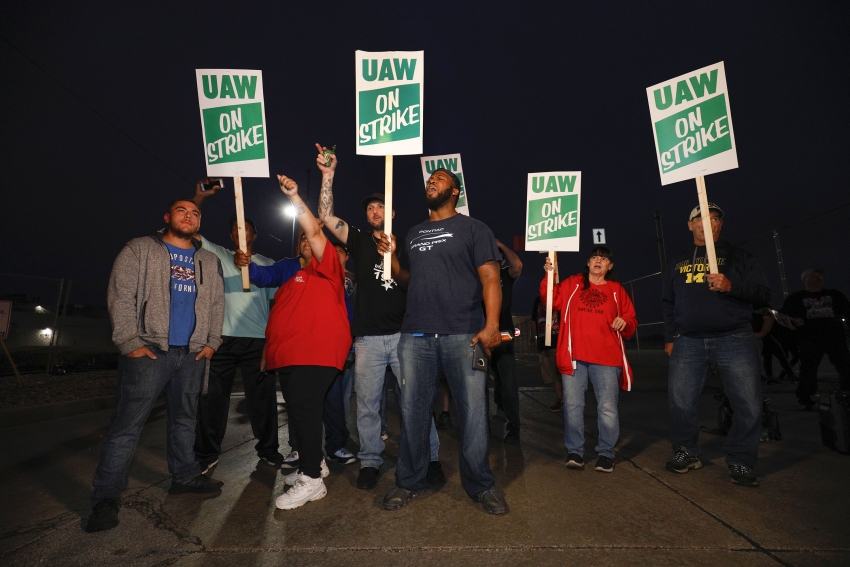 GM got bailed out. Now, striking auto workers are saying it's their turn. (Photo by Bill Pugliano/Getty Images)

Auto workers on strike since midnight at General Motors are between a rock and a hard place—a hugely profitable company making outrageous demands for concessions and a union leadership that made no plan for winning a strike and has not even told members what they’re going out for. Picket signs say simply “UAW on Strike.”

Over the last decades many other unions have taught themselves how to do contract campaigns and strikes, with members on board from the get-go. But to look at the UAW’s confrontation with GM this week, you’d think none of that experience had ever happened.

Not a button was distributed in the plants. Members heard not a word from leaders about bargaining goals. There was no survey of the membership, no contract action teams, no bargaining bulletins to keep members in the loop. No “practice picketing,” no turn-down of overtime, no outreach to the public, no open bargaining.

As they have for decades, UAW officials played their cards close to the vest, with only management allowed a peek. Members knew only what they read in the media, explained materials handler Sean Crawford in Flint.

And yet 49,000 UAW members are angry enough with GM’s arrogance and downright oppression that they are ready to strike.

Local 598 in Flint broke the embargo when it reported that GM wants members to pay more for health insurance and is offering a less-than-inflation raise. Worse, it wants no movement on its odious tiered system that has flooded the plants with lower-paid outside contractors, a subsidiary called GM Subsystems, and temps—GM employees with no rights.

Beth Baryo, a former temp and now an “in progression” (second-tier) worker in Burton, Michigan, said that temps are allowed to miss only three days of work per year, unpaid, with advance approval, and can be forced to work seven-day weeks.

At the GM Tech Center where she works, outside Detroit, said Jessie Kelly, there are 1,300 workers employed by GM and 550 employed by Aramark, doing work that used to be GM workers’.

GM was bailed out by taxpayers to the tune of $50 billion in 2009. It made over $8 billion in profits last year, while paying no federal income taxes yet gifting CEO Mary Barra $22 million. For GM to demand concessions from its overworked employees now is a sign that it thinks the UAW is an easy foe.

After all, UAW President Gary Jones may be distracted. His house and that of former President Dennis Williams were both searched by the FBI August 28. Jones’ top lieutenant before he became president, Vance Pearson, was charged with using union funds for personal luxuries, and it’s widely believed that Jones and Williams will be next. Pearson was the sixth UAW official to be recently charged or convicted of graft.

Crawford said as the strike kicked off, “Yes, the UAW is corrupt. It’s disgusting beyond belief. But this is not about them. It’s about us. We can and will clean house. But we have a more immediate fight on our hands right now.”

Kelly too wanted to rally the troops against GM: “If somebody in the union abused their power, their future is already set out for them. Ours is not, ours is up in the air. All we can do is be there for each other because if we lose sight... GM will win because we were focusing on the wrong fight right now.”

Mitch Fox, now at Romulus Engine, his third GM plant after shutdowns and layoffs, is sickened by the corruption. He hopes leaders’ disrepute could be a motive for the strike: “With everything that’s going on, maybe they’ll try harder to gain our respect back; hopefully that’s the plan.”

But if past contracts are an indication, the pact Jones negotiates is sure to be weak.

YOU CAN VOTE NO

With top leaders discredited but refusing to step away, GM strikers have just one tool to use between their rock and their hard place: their right to vote no. They can do what Chrysler workers did in 2015: organize to turn down a contract that enshrined the two-tier system.

In 2015 rank-and-file Chrysler workers, with no union support, made leaflets and T-shirts, created Facebook groups to share their stories, and rallied outside informational meetings.

They did what no one thought possible in the UAW and voted Williams’s offer down 2-1, overcoming his defiant declaration that “ending two-tier is bullshit!” and winning a partial victory. The offer was improved, establishing a grow-in for second-tier workers to full pay (though still without pensions or the same health care plan).

Soon after the Chrysler vote, perhaps emboldened by the “no” vote at Chrysler, GM skilled trades workers rejected their pact as well, by almost 60 percent, winning some improvements. (Production workers voted yes by 58 percent.)

In 2015 what the automakers did with one hand they took away with another, though—a less-noticed provision also increased the use of temps.

“I’m voting no on any contract proposal that doesn’t give a pathway to equality for every GM/ UAW member,” said Crawford. “This is a sacred principle. It is the very meaning of the word union. This opportunity might not come again.”