Trump Is Waging a War On Labor Unions, But You Wouldn’t Know It from CNN’s Dem Debate 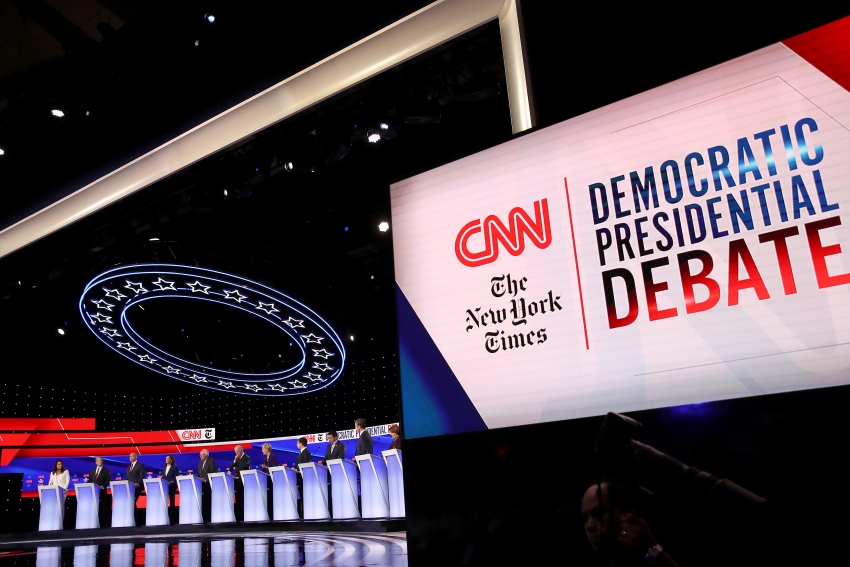 Democratic presidential candidates on stage during the Democratic Presidential Debate at Otterbein University on October 15, 2019 in Westerville, Ohio. (Photo by Win McNamee/Getty Images)

Last night, CNN and the New York Times co-hosted a Democratic debate in Westerville, Ohio—and even by the standards of the mainstream media, the omissions were glaring. There were no questions about police violence, affordable housing, Israel, or the climate crisis. However, there was a softball question about friendship inspired by the bond between Ellen DeGeneres and George W. Bush.

Key labor battles were notably missing from the discussion. While a few of the candidates mentioned unions, the moderators didn’t meaningfully press any of them about the many work stoppages currently taking place throughout the country, except for a question about the General Motors (GM) strike, which mostly focused on the death of the auto industry and how we might be jobs back. The moderators failed to inquire about plans to strengthen worker power, or ask any questions about labor law, giving the impression that unions—and the entire working class—are tangential to the 2020 presidential race.

Surprisingly, there actually was one question about the GM Strike, which has left 50,000 workers without a paycheck for over a month, with the membership poised to vote on a tentative contract, according to breaking news this morning. But the question was framed in the context of a beleaguered industry that could potentially be saved via economic nationalism. The candidates were simply asked about the declining power of U.S. car companies and whether or not they had a plan to bring back jobs from Mexico. There was no mention of the fact that the current strike is directly connected to the restructuring of the company and the concessions that were forced upon workers by the Obama administration as part of the 2009 bailout, despite the fact that a leading Democratic candidate was Obama’s vice president.

That question was fielded by Senator Cory Booker and former Congressman Beto O’Rourke, who both referenced the importance of unions. Booker even said that he’d establish sectoral bargaining rights for workers. That promise might have come as a surprise to the Newark Teachers Union, whose president once declared that the goal of Booker’s state education plan was to “defang public teachers unions.”

No other current strike or worker battle was asked about or referenced in any of the CNN questions. Nothing about the 20,000 Chicago teachers who just voted to authorize a strike, and nothing about the 2,000 striking miners in Arizona or the sanitation workers in Massachusetts who have been on the picket line for a month. There was nothing about the many newsrooms that continue to organize, social workers fighting for a new contract in California, Harvard student workers casting ballots in a strike authorization vote, or the American Federation of Musicians agitating to receive residuals from streaming programs.

There was also nothing asked about the Trump administration’s war on labor unions. Nothing about Trump’s NLRB pushing a corporate agenda for the last two years, its rollback of Obama-era employee protections, its new anti-worker Secretary of Labor, its inadequate new overtime rules, or its dangerous decision to speed up the production lines of slaughterhouses. There was nothing about the state of unions in the wake of Janus Supreme Court decision, and nothing about how to strengthen them despite current legal restrictions.

There were references to the “middle class,” a term that has always possessed a nebulous definition and been used to flatten class divisions and erode working-class solidarity. The only reference to the “working class” was made by Senator Bernie Sanders.

After Warren spoke eloquently about breaking up tech companies, she faced a centrist onslaught of onstage opposition. O’Rourke even compared the plan to the policies of Donald Trump. “We will be unafraid to break up big businesses if we have to do that — but I don’t think it is the role of a president or a candidate for the presidency to specifically call out which companies will be broken up,” he said. “That’s something that Donald Trump has done in part because he sees enemies in the press and wants to diminish their power. It’s not something that we should do.”

Nearly every question posed to the candidates not named Sanders or Warren seemed to be punctuated with an explicit instruction: Tell us why the policies being pushed by a Democratic Socialist and a New Deal Liberal can’t work and why they can’t beat Trump.

However, while the fix might have been in for centrism, it still failed to win the evening. Warren was attacked as if she were the frontrunner and Joe Biden did nothing to suggest the other candidates had picked the wrong target. Despite his recent heart attack and polls that suggest he’s underperforming his 2016 showing, Sanders was strong and concise. While some pundits admitted that the debate might have been his, it was announced Tuesday night that Rep. Alexandria Ocasio-Cortez (D-N.Y.) is endorsing the Senator. Shortly after that bombshell, sources revealed that Rep. Rashida Tlaib (D-Mich.) and Rep. Ilhan Omar (D-Minn.) would also endorse. Bernie has now locked up 75% of The Squad.

Mainstream election coverage may largely omit the subject of labor organizing, but its importance can currently be felt in the labor battles being waged throughout the country. It’s a key component of defeating Trumpism, via the ballot box and beyond. The worker protections that have been eroded must be reinstituted. The labor power that’s been diminished must be built back up. The Democratic candidate must be pushed hard on these issues, whoever it ends up being.