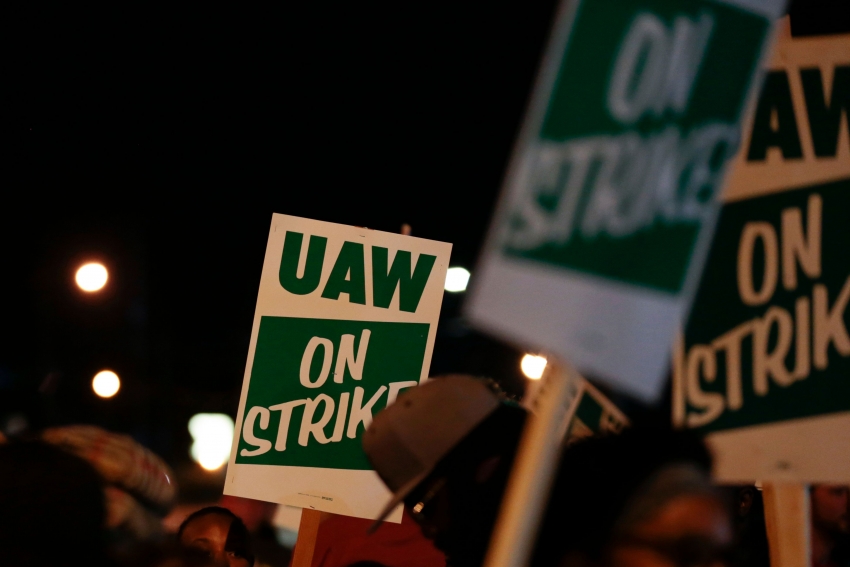 Members of the United Auto Workers (UAW) who are employed at the General Motors Co. Flint Assembly plant in Flint, Michigan, hold signs as they go on strike early on September 16, 2019. (JEFF KOWALSKY/AFP via Getty Images)

Calls for a “just transition” have become central to a robust and revitalized environmental movement in the United States aimed at preventing climate catastrophe. The idea behind a just transition is that, as our economy shifts away from dependence on fossil fuels, the workers in the fossil fuel and related industries should be treated with dignity and respect, and guaranteed good union jobs.

The principle of a just transition was included in the Green New Deal, a resolution put forward by Rep. Alexandria Ocasio-Cortez (D-N.Y.) and Sen. Ed Markey (D-Mass.). The Green New Deal calls for “a just transition for all communities and workers.” While the Green New Deal has garnered some criticism from Indigenous scholars and the Left, it is the most progressive policy option to garner some support among Democrats in Congress, and is also popular among environmentalists, including progressive youth climate organizers. Demands for a Green New Deal and just transition echoed throughout the U.S. contingent of the latest student climate strike marches, which took place in more than 150 countries with approximately 4 million participants worldwide

But there is still more to be done to build the alliances between the environmental and labor movements. Some unions have expressed skepticism and even outright opposition to the Green New Deal, citing concerns that a just transition will not deliver on promises to workers, leaving them abandoned. But pockets of labor and and climate movements have been joining forces to push a shared agenda and build relationships. Trade union members, including members of Service Employees International Union (SEIU) Local 1 in Chicago, joined student climate strikers for their day of marches in September.

Labor advocates also called on the climate movement solidarity with the United Autoworkers (UAW) strike over working conditions and compensation at General Motors (GM). The strike lasted 40 days total, ending in October. One such call came from writer and labor organizer Jane McAlvey, who wrote for The Nation in September that “there’s no strategic opportunity bigger or more important for the economy or the earth than setting up a worker-environmentalist alliance and a worker-friendly transition from gas-powered vehicles to electric.”

Members of the climate movement also made calls for solidarity with striking UAW members, urging environmental activists to show support at the picket lines and to publicly back the work stoppage.

In late September, 46 environmental and other progressive groups—including Friends of the Earth, Greenpeace USA, Oil Change International and several branches of 350.org—sent a letter to the CEO of GM, Mary Barra, expressing support for the UAW strike.

The letter highlights that the climate crisis cannot be solved without a commitment to protecting workers’ rights. “Corporate greed is the ultimate cause of our combined economic and environmental crises,” the letter states. “As environmentalists, we support the United Autoworkers in their fight for good, family-sustaining jobs. Climate change and other environmental problems cannot be solved without investing in workers and supporting strong union contracts."

In an interview with In These Times, Lukas Ross, senior policy analyst for Friends of the Earth, says that the organization took part in creating the letter in response to a call for support for the UAW strike, and worked with the UAW to make sure the environmentalists were sending a message that aligns with the strike goals.

Ross also underscores the necessity of prioritizing the labor movement in climate solutions, because “the reality we have is that rich corporations are trying to divide us by framing this as 'climate versus jobs,' but this [framework] only benefits the bosses [and has been] used to stop progress for as long as labor and climate organizing have existed.”

Youth climate organizers have also been answering the call for solidarity with the labor movement, bringing some young environmentalists out to labor picket lines for some of the first times in their lives. Nicholas Jansen, the Michigan director for the Sunrise Movement, a youth climate action organization, says that he went out to support striking UAW workers on the picket line, an activity he’d only previously taken part in when his mother, a teacher, was on strike when he was younger. Jansen says that “feeling the energy and solidarity was really incredible,” and that he was inspired by UAW workers’ “fight for better conditions.”

Zoe Cina-Sklar, partnerships manager for the Sunrise Movement, says that in addition to encouraging members to show support for the UAW strike, the organization is also collaborating with SEIU 32BJ on campaigning for the Green New Deal. SEIU and the Association of Flight Attendants-CWA were early supporters of the Green New Deal, and later United Electrical, Radio, and Machine Workers of America became the first industrial union in the U.S. to endorse the resolution.

Others who have been involved in the fight for a just transition for many years are encouraged to see so many young people advocating for labor and environmental rights. Rosalinda Guillen, a longtime leader in the rural justice and farmworker labor movements with Community to Community (C2C), an anti-capitalist, anti-colonial feminist organization focusing on food justice in Washington state, says she’s “really excited that young people are getting involved and pushing [against climate change]. There's a lot of lack of education in the schools for youth about the systems that are driving the climate crisis,” but young people are beginning to learn about the causes of climate change.

C2C, a member organization of the Climate Justice Alliance, works closely with a farmworkers union called Familia Unida por La Justicia, which educates and organizes its members around “what a Just Transition could be from a farmworker perspective,” Guillen says. She adds, “Some of the members of the union and other unions are leading the way to a just transition by supporting farmworkers in owning their own farms and having worker-owned cooperatives that are producing agricultural products in the way that we believe they should be produced,” which is to say sustainably and environmentally friendly.

The solidarity-building has also entailed labor unions reaching out and creating bonds with climate groups. As In These Times reported in early November, teachers' unions around the country have been working toward putting the power of their unions behind the student climate protests. Numerous labor unions also turned out in the streets for the global student climate strike in September.

As concepts like a just transition and the ideals encapsulated in the Green New Deal gain traction among progressives, labor union and climate organizers are coordinating around their shared goals. Cina-Sklar of the Sunrise Movement says that climate organizers have “a lot to learn from that history of labor organizing.” With the popularity and broad support for the student climate strike, including from labor unions, she says that she has a “renewed sense of hope that we're going to be changing our system and challenging the powers that be, so that we have leaders that are actually standing with communities and not only standing with their bottom line.”