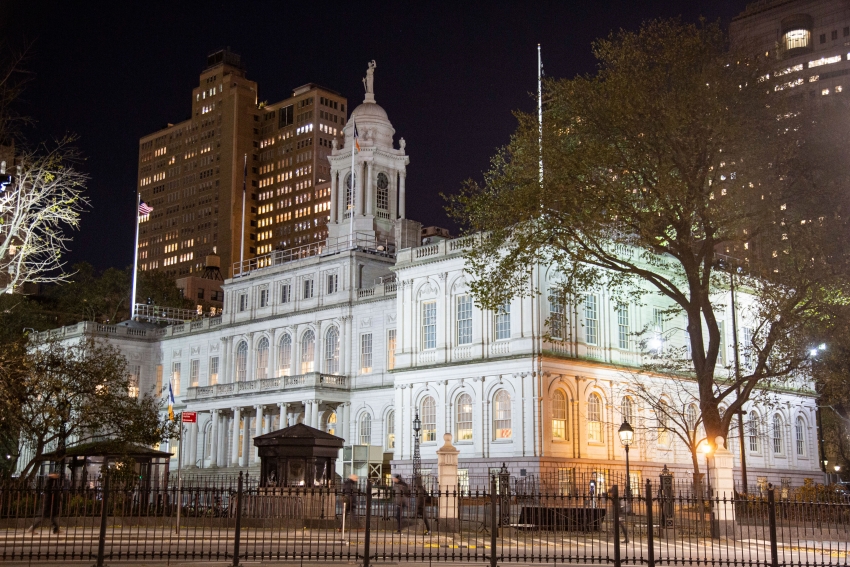 The staff at the New York City Council are in the final stages of a union drive that's been nearly a decade in the making. (Photo by Nicolas Economou/NurPhoto via Getty Images)

Last November, employees at the New York City Council announced a campaign to unionize, seeking higher pay and a voice in the workplace. Today that campaign draws close to formal recognition—a rare and noteworthy instance of workers successfully building a new union independently, in a politically sensitive place.

Sarah Crean, a communications director at the Council who has been involved in the campaign from the beginning, says that, among workers, the idea of unionizing stretches back nearly a decade. The current campaign has been bubbling for nearly three years. First, there was a letter to the Council speaker, signed by about 100 staffers, with a salary analysis and other work issues. This resulted in additions to the budget of every Council member, but Crean says that was a “mixed bag” for workers, since not all the money was put towards salaries. “There was a lot of frustration after that,” she said.

Internal organizing continued. Last October, the Council issued a report finding that City Councilman Andy King was guilty of sexual harassment, misuse of funds, and retaliation against his staff, but a motion to expel King from the Council failed. Crean says this was the “one of the last straws” for staffers who already felt overworked and underpaid. “There was a thought: if we’re going to do it, we have to do it now.”

The next month, the union campaign went public. At the time, organizers had already secured 150 union cards, out of a total unit that they estimated could be as large as 600. Determining the exact composition of a constantly fluctuating staff is difficult, but now organizers are planning for at least two separate units: one of legislative aides, numbering between 300-400, and one of finance aides, of less than 50. City Council Speaker Corey Johnson has been supportive of the union effort. In late January, staffers requested voluntary recognition of their union. That recognition has not happened yet, but Crean says that all signs are positive, and the Council has been negotiating technical issues like the size and scope of the unit with an attorney that staffers hired by holding fundraisers to support their union drive.

Besides the natural political leverage that would accrue to a union of City Council staffers, what makes this drive notable is the fact that they have pulled it off independently, without affiliating with any existing union. That was not completely by choice. Crean says that they had conversations with a number of unions, but because all of New York’s major unions have business before the Council, there were concerns everywhere about the political perils of taking on the staff union. Though the independent route has placed great demands on the time of the workers to do the work of organizing and forming the infrastructure of a union themselves, it also means they will be unencumbered by any political conflicts that could work against their power when they go into bargaining. And Crean says that the group may still affiliate with an existing union if the situation warrants it later. ”The door is open down the road,” she said.

Like most union drives, the City Council union was inspired by basic demands for better salaries and working conditions. But it takes little imagination to see how a union of legislative staffers could exercise its leverage on a wide variety of political issues—and how such a union could be extremely valuable to the New York labor movement as a whole. The fact that hundreds of harried employees could navigate the delicate political complexities of their workplace while organizing themselves for years speaks to the level of motivation at play. Whether the union is ultimately part of an existing union or a brand new one, its very existence is a testament to the newfound visibility of labor activism in America.

“This is something for a long time people said was impossible… it’s a reflection of what’s going on across the country,” Crean said. “People are having to take action. We had no other choice if we wanted better lives.”