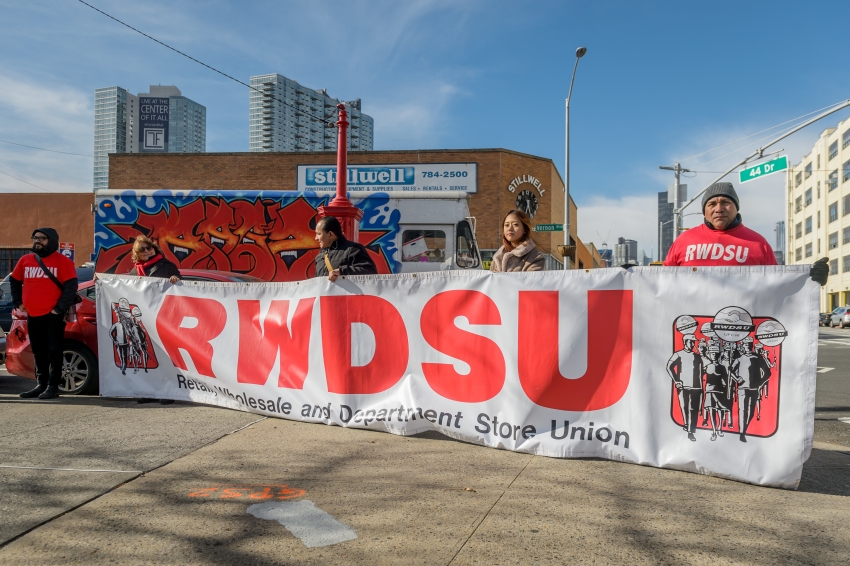 Labor groups, community groups, residents and elected officials gathered together on November 14, 2018 at Gordan Triangle in Long Island City, to say no to the billions of dollars in subsidies for Amazon to locate to NYC. (Photo by Erik McGregor/Pacific Press/LightRocket via Getty Images)

Joe Biden’s stronger-than-expected performance on Super Tuesday may be tempting some unions that have sat on the sideline through the Democratic primary to fall in behind a candidate they now perceive to be the likely winner. This morning, a slew of locals of the Retail, Wholesale, Department Store Union (RWDSU) endorsed Biden, and the union telegraphed its support for Biden’s campaign.

Like many major unions, the RWDSU, which has about 100,000 members nationwide, has not issued a national endorsement in the Democratic primary. Stuart Appelbaum, the head of the RWDSU, is on the executive committee of the DNC. In many unions that did not issue national endorsements, locals issued their own endorsements—Bernie Sanders picked up dozens. But in the same way that Hillary Clinton picked up the majority of union endorsements in 2016 despite Sanders having a stronger history of labor support, unions now may be reading the political tea leaves and jump in to back Biden if they think he will be the eventual nominee.

Notably, all of the endorsement press releases were packaged and sent out sent out to the media by the national office. Chelsea Connor, RWDSU communications director, told In These Times, “Many of our members believe Joe Biden provides the best chance to defeat Donald Trump and support the under-ticket. We haven’t endorsed yet, but encouraged our locals and councils to let their voices be heard. We also aren’t aware of any other local or council supporting other candidates in the RWDSU.”

Union endorsements of Joe Biden have not been without controversy. Last month, more than 1,200 IBEW members who supported Bernie Sanders issued a letter asking their leadership to retract its endorsement of Biden. (Sanders today announced he was endorsed by the president and vice president of the Chicago Teachers Union, though the union itself did not endorse anyone.)

In an election year that featured a crowded field of Democratic candidates, many of whom put out extraordinarily pro-union platforms, sitting out the primary and endorsing the eventual Democratic nominee has been considered the wise move by the majority of major unions. As the contest appears to have narrowed to Bernie vs. Biden going into Michigan next week, union support has become more critical than ever for both candidates. It is possible that today marks the beginning of a slew of unions making the common calculation that Biden is going to win, and now is the time to endorse him, while they still believe they can win political points for it.

In 2016, many Sanders supporters in the labor movement were angry when major unions made a similar calculation and backed Hillary Clinton, only to see Donald Trump win. Time will tell if that calculation is more successful in 2020.