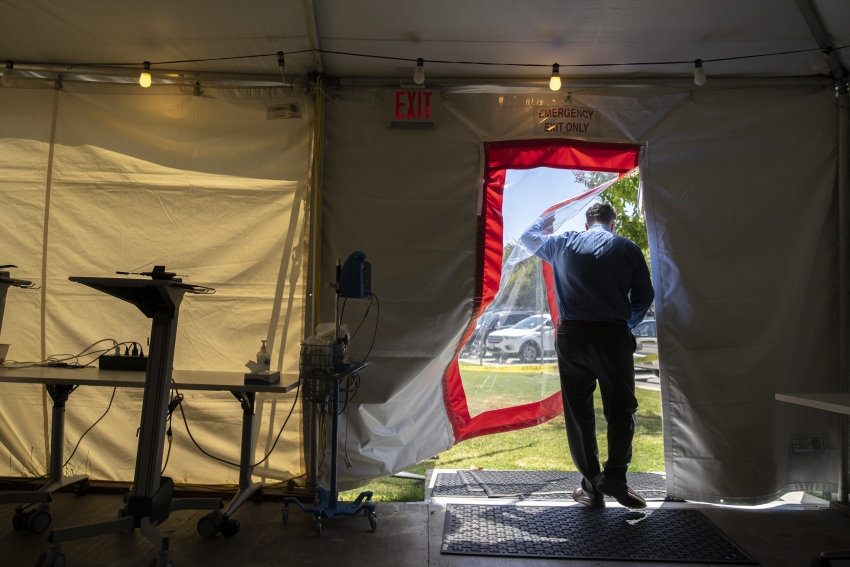 Despite nationwide shortages of personal protective equipment (PPE) and working conditions that have often been life-threatening, there have not been major strikes of hospital workers in America since the coronavirus pandemic struck. Until now.

More than 700 employees of Santa Rosa Memorial Hospital, a regional trauma center in California’s Sonoma County, held a five-day strike that concluded on Friday. Foremost among the motivating issues were cuts in health care and paid sick leave that the hospital, owned by Providence St. Joseph Health, was pushing on employees during a contentious contract bargaining campaign. The employees are members of the National Union of Healthcare Workers (NUHW).

“The biggest reason is because we’ve been out of contract for over a year, and the hospital is trying to force us into a pretty bad contract,” said Steven Batson, an anesthesia tech and 10-year veteran of the hospital, speaking from the picket line last week, where he was joined by hundreds of his coworkers. The company wants to significantly increase health care premiums, Batson said, and to take paid time off away from senior workers and shift it to newer workers as a recruitment tool. Batson, a shop steward, said the contentious bargaining over this contract is “absolutely” the worst he has experienced in his ten years.

Chuck Desepte, an X-ray technician who has been at Santa Rosa for 13 years, agreed. “It’s the takeaways that I’m not accepting,” he said. “They can afford this. We don’t want to go backwards. We’ve been here for this community over and over again.”

In May, the New York Times reported that Providence Health, which received a bailout of more than $500 million from the federal government in the CARES Act, has a $12 billion cash pile and sizable investments in hedge funds and venture capital. “Last year, Providence’s portfolio of investments generated about $1.3 billion in profits, far exceeding the profits from its hospital operations,” the Times wrote.

Though the strike was not directly caused by the fallout of the coronavirus, the pandemic is playing an unavoidable role. Batson said that although the union held a strike authorization vote in February that passed overwhelmingly, it held off on taking action once the pandemic hit. He said that the hospital was slow to require universal masking, and that to this day, housekeeping staff and outpatient lab technicians who do coronavirus testing are not given adequate PPE, like N95 masks. “The hospital has definitely used this pandemic as a weapon against us,” he said, including by trying to portray the workers as irresponsible for going on strike.

In a statement on the first day of the strike, the hospital wrote that “we are deeply disappointed that NUHW has decided to hold a five-day strike given that the number of COVID-19 cases is on the rise in Sonoma County and the potential for a significant increase in hospitalizations remains.” The company also hastened to paint employees as selfishly exploiting current events. “The union has made clear in communications to our caregivers that this is not a strike about personal protective equipment (PPE) or workplace safety. Instead, this is an ordinary dispute over the terms of our labor contract,” the hospital wrote. “It is unfortunate and unfounded that the union is using COVID-19 as a platform for its negotiating tactics. We never deny a caregiver PPE.”

The company itself is playing hardball. It tried to dissuade the strike with preemptive economic threats, posting ominous fliers warning that, “If NUHW submits a strike notice, our current wage offer of an annual 3% increase will be lowered to 2%, to account for the significant expense of a disruptive strike, and the current offer will be pulled off the table.” (Time will tell whether that threat stands as negotiations continue.) As soon as the strike was called, the company stopped deducting union dues from workers’ paychecks, a move that serves to annoy and hassle the union, making it much more time-intensive to collect dues. Contracted replacement workers from an outside agency were brought in for the five-day duration of the strike.

Though every labor action is unique, the fact that NUHW was willing to go through with the strike in the face of the inevitable attacks about responsibility during the pandemic could signal that the fragile labor peace that has mostly reigned in the healthcare sector—an industry afflicted with more than its share of dissatisfied and endangered union workers—may be buckling. Unions that have been cautious about going on strike over contract issues during this crisis will sooner or later be forced to decide whether they will allow employers (who may have multi-billion-dollar investment portfolios) to make them swallow concessions they would not have otherwise accepted. The employees at Santa Rosa, who worked through major wildfires in their area in 2017 and 2019 before facing the Covid outbreak this year, will soon find out if their bold action pays off.

It was not an easy decision. “We’re health care workers,” said Desepte. “We want to take care of people.”