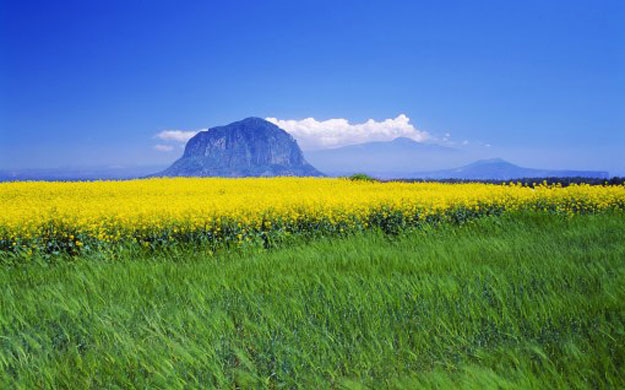 Sanbang mountain, on Jeju island, off the southwest coast of South Korea. (Image via cinemaelectronica.com)

The Threat of Warships on an ‘Island of World Peace’

The resistance is a grassroots movement that goes well beyond the issue of the island's militarization. Human rights, the environment and free speech are also at stake.

Jeju’s history, however, is far from idyllic. In 1948, two years before the outbreak of the Korean War, the islanders staged an uprising to protest, among other issues, the division of the Korean Peninsula into North and South. The mainland government, then under U.S. military occupation, cracked down on the Jeju insurgents.

South Korean police and military forces massacred islanders and destroyed villages. Korea historian John Merrill estimates that the death toll may have exceeded 30,000, about 15 percent of the island’s population.

Decades later, a government commission investigated the Jeju uprising. In 2005, Roh Moo-hyun, then South Korea’s president, apologized for the atrocities and designated Jeju as an “Island of World Peace.”

Today Jeju Island is once again threatened by joint U.S.-South Korean militarization and violence: the construction of a naval base on what many consider to be Jeju’s most beautiful coastline.

For more than four years, island residents and peace activists have engaged in determined resistance to the base, risking their lives and freedom.

The stakes are high for the world as well. Recently the Korean JoongAng Daily, in Seoul, described the island as “the spearhead of the country’s defense line”–a line recklessly located 300 miles from China.

In these troubled waters, the Jeju base would host up to 20 American and South Korean warships, including submarines, aircraft carriers and destroyers, several of which would be fitted with the Aegis ballistic-missile defense system.

For the United States, the base’s purpose is to project force toward China–and to provide a forward operating installation in the event of a military conflict. The last thing the world needs is brinksmanship between the U.S. and China.

The protest now taking place on Jeju counts as a critical struggle against a potentially devastating war in Asia, and against the deeply rooted institutional structures that are driving the world toward ever more conflict.

Not surprisingly, China sees the base as a threat to its national security. At the very least, the base is likely to trigger confrontation and an arms race between South Korea and China, with the U.S. almost inevitably involved. Failure to prevent this dangerous, destructive project may well have consequences reaching far beyond Asia.

We need not speculate how Washington would react were China to establish a base near the U.S. coast.

The new base on Jeju is located in Gangjeong, a farming and fishing village that has reluctantly become the site of an epic battle for peace.

The resistance is a grassroots movement that goes well beyond the issue of the island’s militarization. Human rights, the environment and free speech are also at stake. Though small and remote, Gangjeong is an important battleground for all who believe in social justice worldwide.

South Korea started construction of the base in January but protests halted the work in June.

An eyewitness reports that the villagers’ nonviolent resistance has led to arrests targeting filmmakers, bloggers, clerics, activists on social-network websites–and most notably, the leaders of the movement.

Last month, riot police broke up a nonviolent rally and arrested more than three dozen activists, including the mayor of Gangjeong; the leader of one of the most effective peace groups in Korea; and a Catholic priest.

Basic democratic ideals are also under threat. In the 2007 vote to authorize the construction of the naval base, 87 people, some of whom reportedly were bribed, decided the fate of an entire village of 1,900 and an island of more than a half-million people.

Islanders were told that the military base would double as a tourism hub for cruise ships – indeed, that it would be the only means for such ships to dock at the island, yielding commercial benefits. The claim is hardly credible, if only because at the same time, on a different shore, a massive port expansion project has been underway and could be completed by summer 2012. It has already been announced that this new port will host cruise liners.

Gangjeong villagers know full well what their future holds if their cry for peace is not heeded: an influx of South Korean and foreign military personnel, advanced armaments, and a world of suffering delivered to a small island that has already endured enough. The irony is that the seeds for future superpower conflict are being sown on an ecological preserve and island of peace.