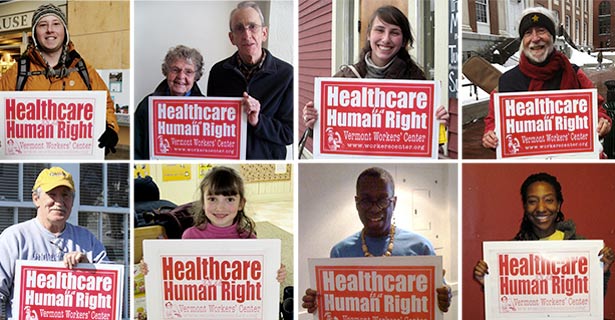 Vermont is on its way to having universal healthcare because everyday Vermonters, like those pictured above, demanded it.

Lessons From The Single-Payer State

How to spread Vermont’s human-rights victory throughout the country

Just as the uprisings in Wisconsin redefined what defensive struggles look like and ignited similar efforts around the country, Vermont's single-payer example shows how to build a proactive people's movement that can change the political landscape.

BURLINGTON, VT. – On May 26, 2011, as we watched Vermont Gov. Peter Shumlin (D) sign “Act 48: Relating to a Universal and Unified Health System” into law–which sets Vermont on course to become the first U.S. state to have a universal healthcare system–we were struck by how far we had come. Only three years before, when the Vermont Workers’ Center launched the Healthcare Is A Human Right campaign, we were told by almost everyone that this couldn’t happen. Yet even as our dream takes shape, we realize more battles lie ahead. With deep-pocketed and well-connected foes plotting to defeat our people’s movement, we must scale up our grassroots organizing to build a broader movement for social and economic rights. We must keep building to establish real democracy.

Our ultimate success depends on Vermont becoming a catalyst for victories elsewhere. Just as the uprisings in Wisconsin redefined what defensive struggles look like and ignited similar efforts around the country, Vermont’s single-payer example shows how to build a proactive people’s movement that can change the political landscape. Other grassroots leaders and I have reflected on our experience of three years of intense human rights-based organizing and identified five lessons that can help our counterparts around the country:

Unfortunately, past legislative initiatives for universal healthcare often fell victim to political expediency as politicians declared themselves to be advocates on the campaign trail, but, once in office, abandoned the platform for more “politically possible” incremental reforms. It had been clear for years that Vermonters wanted universal healthcare, but politicians would not take on the healthcare industry. Through grassroots organizing, we set out to demonstrate to every legislator in Vermont that the majority of their constituents supported equal, high-quality healthcare for everyone. We showed ambitious politicians that supporting healthcare reform was in their interest–and that ignoring the Vermonters who elected them would be politically costly.

2) A human-rights framework can be extremely effective for both organizing work and policy fights.

When we started our campaign, many healthcare activists and political pundits questioned whether “healthcare is a human right” would resonate with “middle Vermont” and rural communities. They expressed skepticism that a values-based approach could translate into an effective policy framework.

But the failure of single-payer arguments to receive a hearing in the national healthcare reform debate, along with the debacle of President Barack Obama’s “public option,” demonstrated the pitfalls of relying primarily on a narrative that revolved around costs and efficiencies. The human-rights framework puts people at the center of policy and practice, shifting the discourse from costs to needs, from figures to values, and it allows us to unite communities long divided on other issues. Using human rights, we were able to engage Vermonters from all walks of life and focus the debate on real people, their healthcare needs and struggles. We put our values as a community and a country in the forefront, thereby setting the stage for a broader movement for all economic and social rights.

To guide policy discussions and assess legislative proposals, we deployed five human rights principles: universality, equity, accountability, transparency and participation. These were expanded into a policy framework whose key elements were so persuasive that they made it into the statutory language of Act 48. As Vermont sets up its universal healthcare system, we will be able to use this framework to measure implementation proposals against human-rights standards and to develop policy alternatives.

3) Be prepared to counter divide-and-rule tactics.

In the early months of the campaign, the Vermont Workers’ Center, in collaboration with the Bay Area-based Catalyst Project, held a series of anti-racism workshops for our members and supporters. Included in these day-long trainings was an organizing role-play exercise about the divisive issue of covering undocumented workers. The take-home message was that, following human-rights principles, our campaign would be committed to a truly universal system in which everyone is included regardless of immigration status.

As expected, our workshop scenario eventually unfolded on the very real stage of the statehouse floor. After the reform bill had already passed the House and Senate healthcare committees, a last-minute amendment for excluding undocumented workers passed the Senate with a large, bi-partisan majority. Fortunately, through our past training and our emphasis on the principle of universality, our campaign leaders were crystal clear on this issue: When we say universal, we mean everyone!

Despite being told by the governor and legislative leaders that there was no chance of removing this divide-and-rule amendment, we immediately got to work demonstrating that the people of Vermont would only accept a truly universal and inclusive bill. On May 1, days before the final bill was passed, 2,000 Vermonters converged on the statehouse for our annual May Day rally, signed petitions against the exclusionary amendment, listened to speeches from undocumented farm workers and chanted, “Universal means everyone, everywhere.”

By May 3, the legislators reversed course and struck the amendment.

4) It’s not just about having convincing arguments, it’s about getting our communities organized to demand justice.

It certainly can be useful to have facts and statistics to back up what we are fighting for. But what matters most is having the people power to convince decision-makers to act on the will of their constituents. For years, advocates demonstrated that single-payer financing could cover everyone and still save money–yet cost-effectiveness was not enough to drive legislative action. We had to put pressure on our elected officials with an active, statewide network of thousands of people to create the political space for action. We now have organizing committees in every region whose members mobilize their neighbors to make calls, send letters, and come to rallies and events. Every day, we are holding our legislators accountable.

5) We need to tell our own stories.

Politicians and most media outlets will go out of their way to overshadow the role of a people’s movement in fighting for and securing positive social change. The coverage of Vermont’s universal healthcare breakthrough focused on a handful of politicians, policy experts and doctors, while largely ignoring the collective voice and unified action of thousands of Vermonters. This serves to contain and potentially neutralize our policy victories and to lull community members into passivity.

Since we cannot depend on the mainstream media to cover our mobilizing efforts, values, needs and demands, we must tell our own stories, our own people’s history of how human rights were won for future generations. People must understand that without their own actions and their own media, change will not happen. There is no hero who will come and save us.

Our opponents will not tolerate the development of Vermont’s dangerous example of providing healthcare as a public good. Those that reap enormous profits from the current system may be small in number, but they are influential. To overcome their resistance, we must cultivate a group of committed leaders and organizers who are as united and sophisticated as our opponents. Leaders of our campaign have traveled around the country to speak with our peers about these lessons. Ambitious campaigns around bold visions for systemic change must be launched, executed and defended by grassroots movements. Nothing else can ensure success.

James Haslam, the director of the Vermont Workers' Center in Burlington, travels the country to promote the Put People First! The People's Budget Campaign.