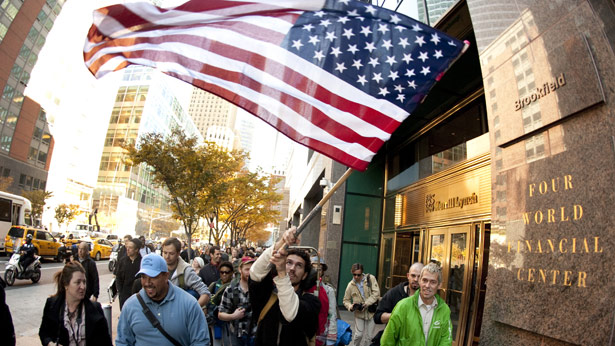 Occupy protests have focused the nation’s attention on inequality. But how can this movement be sustained?

Though the Occupy movement is only a starting point, it has already animated our political discourse.

The Occupy protesters have quickly altered the political landscape of the United States. They are standing up for all those who find themselves in thrall to a grasping and ever-more powerful oligarchy, aka "the 1%." In its December 2011 issue, In These Times explores the terrain of this all-American revolt—an uprising that may be the most formidable challenge to neoliberalism yet. —The editors

The two events were not related (the media was ignoring the protesters), but their contrasting messages reaffirmed a reality of American life: The elites–the real instigators of class warfare–inhabit a different universe than the rest of us. In that universe, they have gorged on ill-gotten riches while skillfully blocking serious debate about rising inequality and worsening poverty.

What worries Ryan and the 1% is that “divide-and-conquer” might be running its course, and the majority class might unite around some dangerous ideas–like tackling inequality; taking on banks; bringing Wall Street criminals to justice; taxing the rich; privileging job creation over deficit reduction; removing big money from politics; and boosting government investment in infrastructure, healthcare, education and anti-poverty programs.

The establishment is worried not about the absence of clarity of message, as media elites insist, but rather the movement’s potentially broad reach. Occupy is a vessel for a spectrum of grievances that could unite heretofore divided struggles.

Though the Occupy movement is only a starting point, it has already animated our political discourse. It is now common knowledge that in 2010, 400 individuals possessed more wealth than 155 million of their fellow citizens.

Given such reality, Americans are weary of the stultifying obsession with deficits–a canard embraced by a Democratic leadership tone-deaf to popular will–and want strategies to revive the economy by taxing the rich and ramping up public investment.

Social movements can correct injustices through consciousness-raising and mobilization. They also create the space and impetus needed for policy responses. Thus, through executive fiat in October, President Obama announced new measures to mitigate home foreclosures and modify the terms of student loan payments–small measures, to be sure, but the right policy trajectory.

The Occupy uprisings assure that policy initiatives will now take place within a climate of public hostility toward elite-coddling economic policy–a condition favorable to progressive reform.

This new focus on inequality presents an opportunity to beat back a 30-year discourse that blames societal problems on the individual. This has prevented a deeper examination of causality and led to policies that emphasize punitive sanctions rather than prevention and social reform. A national consensus that inequality affects every aspect of daily life could reframe the national debate. For example, instead of bashing teachers, we might craft policies that recognize the role of poverty in undermining education.

The question is: How can this movement be sustained? Part of the answer lies in the willingness of traditional progressive organizations–labor, environmental, women’s, civil, human, gay and disability rights movements and faith-based organizations–to coalesce around it, to turn people out and to provide resources.

It’s too early to tell, but these early victories, the steely determination of protesters and high public support for agitation, bode well for progressive politics. We could be witnessing the most formidable challenge to neoliberalism yet.

Editor’s note: This editorial was written prior to the police raid and eviction of the Occupy Wall Street camp in Zuccotti Park that took place in the early hours of November 15.