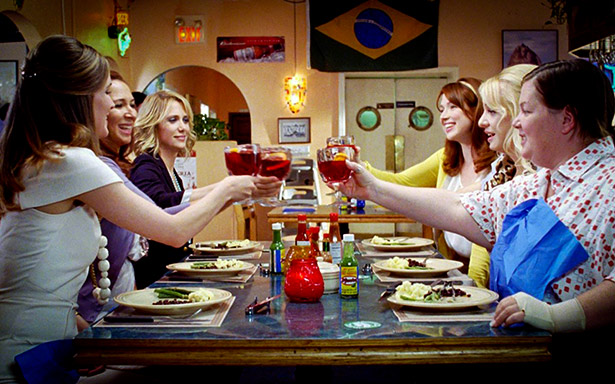 Bridesmaids was a triumph for a new, and startlingly feminist, genre: Lady Loser Comedy. And Melissa McCarthy's character, far right, was the boldest example of its aesthetic.

A new feminist genre gives women a chance to be crass, pathetic and hilarious.

Comedy is not about attractive, well-behaved men--or women. Attractive people with good manners are nice to know in real life. In comedy, they're dead air.

“I’d like to say goodnight to my two kids, Viv and Georgie,” Melissa McCarthy began her Saturday Night Live monologue on October 1. “Go to sleep, because momma’s about to get pretty inappropriate.”

McCarthy is the comic discovery of 2011. She was a key part of Bridesmaids, one of the summer’s biggest hits. In a stellar ensemble – Kristen Wiig, Jon Hamm, Maya Rudolph – it was McCarthy, formerly known as the lead of little-discussed sitcom Mike and Molly, who stood out. Her role was blunt, sexual and aggressive, with monologues that piled absurdity on top of deadpan absurdity. When the titular bridesmaids were discussing wedding shower themes, McCarthy’s character suggested “Fight Club.” When the protagonist, played by Wiig, was at her low point, McCarthy delivered an inspirational monologue that began with a story about high school, progressed to nuclear weapons and culminated with McCarthy sitting on Wiig while repeatedly slapping her in the face. She won an Emmy for Mike and Molly, probably because of her Bridesmaids role; there is now speculation that she will win a Best Supporting Actress Oscar, or at least a nomination, and that Wiig might earn another nomination.

In fact, Bridesmaids was a triumph for a new, and startlingly feminist, genre: Lady Loser Comedy. And McCarthy’s character was the boldest example of its aesthetic. You can find the roots of the genre in Tina Fey’s 30 Rock, wherein Fey plays Liz Lemon, a sexless, awkward, thanklessly employed woman in her late 30s who dislikes intimacy and loves off-brand cheese puffs, or in Gregg Araki’s Smiley Face, in which Anna Faris plays an unemployed stoner with a weakness for lasagna, soft mattresses and Marxism. You can find an offshoot in What’s Your Number, which opened in September, wherein Faris plays a woman who gets disastrously drunk at her sister’s engagement party, lights her own hair on fire, sleeps with her jerk boss after he’s fired her and concludes her own inspirational monologue with “I’m a jobless whore who’s slept with twenty guys; I want someone who appreciates that about me.” But you can find the best – and, yes, most liberating – examples in Bridesmaids. Which is where we have to start discussing how simultaneously shocking and appropriate it is for that movie to have been produced by Judd Apatow.

Apatow is responsible for some of the most successful comedies of the past decade. He also originated its most obnoxious genre: The Bromance. Think Knocked Up, Superbad, I Love You Man, The Hangover, etc., etc., ad nauseam. Apatovian characters are irresponsible, unsuccessful child-men who rely on mature and/or uptight women to bring them kicking and screaming into adulthood. Romance is always presented as threatening, somehow sacrificial; the real bliss, for these men, is in the bonds they have with their equally childish male friends. This equation is obviously sexist, both in terms of the rewards for male and female actors (the girls rarely get the laughs) and in its picture of gender relations: Women are presented as a means through which men complete their own personal journeys. And the childishness, the irresponsibility, the close friendships and sense of play: To be blunt, it looked more fun than growing up. So why weren’t women included? Why couldn’t we be losers too?

Critiques of this development are worthwhile. In her Bridesmaids review, critic Michelle Dean points out that “almost every joke was designed to rest on [McCarthy’s] presumed hideousness, and her ribald but unmistakably ‘butch’ sexuality was grounded primarily in her body type.” That’s fair. But it reminded me, in a comparison that would horrify Dean, of Christopher Hitchens’ infamous 2007 essay in Vanity Fair on women and humor, which concluded that men are funny because humor makes them attractive, whereas funny women are… well, read for yourself: “There are some impressive [funny] ladies out there. Most of them, though, when you come to review the situation, are hefty or dykey or Jewish, or some combo of the three.” Obviously, this is offensive. But it left me wondering whether Hitchens had ever actually seen a photo of Rodney Dangerfield, John Belushi, Woody Allen or Patton Oswalt, or, or…

Male comedians tend to be funny-looking guys. Even the conventionally handsome cultivate something off-putting or strange about their physicality. Zach Galifianakis hides a handsome face with an unruly beard. Steve Carell can play an attractive lead in romantic comedies, but uses his high-pitched voice and stiff body language to make his other characters laughable. Women don’t watch comedy to get turned on. They watch it for the same reason men do: to laugh. Comedy is most definitely not about attractive, well-behaved men – or women. Attractive people with good manners are nice to know, in real life. In comedy, they’re dead air.

And that’s why – in a culture that demands that women look and behave impeccably – female roles in comedy are often thankless. Women are stuck playing straight-men: Frustrated yet beautiful wives, uptight yet beautiful girlfriends, unattainable yet beautiful objects of desire.

McCarthy is hefty, and yes, part of her performance is a certain blunt pragmatism that could be read as “butch.” She’s also playing a key Apatovian role – Jonah Hill’s role, in fact. She’s a twin sister to Hill’s characters in Superbad and Forgetting Sarah Marshall: aggressive, hypersexual, crude and given the broadest, most popular bits. Hill’s not conventionally sexy, or conventionally well behaved. Neither is McCarthy. They’re comedians; being pretty and nice is not their job.

What makes comedians transgressive, from Lucille Ball to Ken Jeong, is their willingness to look bad in public. Women have never been encouraged to cultivate this fearlessness. There are exceptions – Ball or Joan Rivers come to mind – but they tend to prove the rule. Lady Loser Comedy opens up the game. Women who have the profane deadpan of McCarthy, or the cool prickliness of Fey or the off-rhythm intensity of Wiig: They’re not excluded any more. They embarrass themselves, they’re completely inappropriate, and that’s fine; it’s comedy.

Of all the rights women agitate for, Lady Loser Comedy gives us the most joyful: The right to laugh at ourselves.