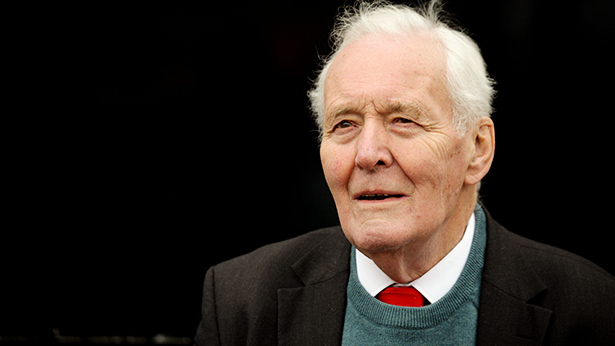 Tony Benn, 86 and president of the Stop the War Coalition, waits to address the Antiwar Mass Assembly in London on October 8. (Photo by Oli Scaff/Getty Images)

I've made every mistake in the book, and I'm not ashamed of making mistakes, because you learn from your mistakes. The thing I would be ashamed of is if I ever said anything I didn't believe in order to get on.

Tony Benn is now 86. He left Parliament 10 years ago in order, as he put it, “to spend more time on politics.” Benn’s public service career began in 1950 and was interrupted in 1960, when his father died and he became Viscount Stansgate. After a famous struggle, in which his determination to relinquish his title won popular support, British law was changed to allow members of the nobility to renounce their titles. In Benn’s case, it meant that he was free to return to Parliament as a commoner. (Lords–peers–can be in government, but they can’t sit in the House of Commons.)

Benn served in both Harold Wilson’s and James Callaghan’s Labour governments, but has since moved leftward. And while that trajectory may have cut short his ministerial career, he has remained an enormously popular figure with Labour activists. Indeed, the adjective “Bennite” has been used for years to describe the small number of left-wing Labour MPs, and the much larger number of unhappy Labour supporters, who have nonetheless maintained their loyalty to the party.

The central belief for which Benn has fought and argued most effectively has been popular democracy. Since retiring from Parliament, he has been involved in grassroots politics, holding the post of president of the Stop the War Coalition and, most recently, speaking out in favor of the Occupy movement.

Eight volumes of his political diaries have been published, and he is currently at work on the ninth. He spoke to In These Times at his home in London.

What do you tell the Occupy movement in London when you speak to them?

This movement has been taken quite seriously, much to my surprise. The establishment normally deals with new ideas by first ignoring them, and then, if you go on, saying you’re mad, and, after awhile, saying you’re dangerous.

Occupy has hit at exactly the right moment. There’s a major economic crisis in Europe and in the world. And these people are asking, “What would Jesus do?” That registers quite well.

They’re talking about the nature of capitalism and the fact that it’s a threat to democracy. They’ve raised questions, rather than found answers, but they have made a very powerful case.

Eric Hobsbawm, in his latest book, writes: “The mechanism of capitalist growth generates internal contradictions, endless bouts of tensions and temporary resolutions–growth leading to crisis and change.” Is the current economic situation part of that cycle? Or are we facing something we haven’t experienced before?

This is a moment when people who haven’t thought very seriously about alternatives begin to think about them. If you look at our history we’ve had so many periods when there have been changes–the English Revolution, the Tolpuddle Martyrs and the suffragettes–brought about by pressure. So it may be one of those periods, but you can’t forecast them.

You’ve always talked about the pressure exerted by big business and banks on governments and political parties. Is it a different kind of pressure now? The 1% versus 99%?

All campaigns for change always begin at the bottom and inch toward the top. But this is not really a civil war between two parts of the establishment. It’s much more of a challenge from the masses against the ruling class.

What do you think about Europe these days?

Europe, as it is set up, lacks a democratic foundation. Europe is run by [European Union] commissioners who are appointed, not elected. I used to sit on the Commission with them, and I found it really quite frightening that bureaucrats should be determining how things are done.

There will have to be some instrument for bringing Europe together, but it will have to rest on popular consent.

You’ve stuck with the Labour Party through thick and thin. And a lot of it has been quite thin, hasn’t it?

Well, ever since I left Parliament I’ve devoted myself primarily to campaigns, peace campaigns and the campaign against the cuts in social services. If you can concentrate on an issue then you can build support both within the Labour Party and outside it, and be effective.

What do you think about the Labour Party leader Ed Milliband?

Ed worked in my office as a student when he was 15. I disagree with a number of things he’s said–he criticized the unions that were going on strike last summer, and that was a mistake. But on the other hand, he made rather friendly noise about Occupy. You can’t look for a perfect person. He’s probably as good of a leader as we could have now.

When you read your own diaries, do you look back and think, “I recognize that young man”?

Well, I’ve made every mistake in the book, and I’m not ashamed of making mistakes, because you learn from your mistakes. The thing I would be ashamed of is if I thought I ever said anything I didn’t believe in order to get on. And I hope I haven’t done that.

In what ways have you changed?

As I got older, I began to see things in a different way. I realized that the Labour Party–which I joined when I was 17 and thought was the instrument for change in society–turned out to be a group of people with a better idea for running the status quo, when actually the problem was the status quo. Now, with Occupy and the crisis, what’s clearly needed from the Labour Party is some idea of how we might change the system, and that takes us back to our socialist tradition. And that is happening through the campaigns for peace and justice. People, drawing from their experience, understand that we need to go further than we ever have in the past.

I’ve always seen you as having a balance of optimism and skepticism. You are an optimist, aren’t you?

Well, you have to be optimistic, because if you don’t feel as if you can win you don’t put the effort in. And the mainstream media is always pessimistic about every campaign–they say it won’t work, it’s not realistic, no one will support you. If the media can spread pessimism, they can dampen down all the campaigns that might bring about change.

Hope is the fuel of progress. In every human being, since the beginning of time, two flames have burned: the flame of anger against injustice, and the flame of hope that you can build a better world. My job is to go around fanning both flames as hard as I can.

Is it different doing that outside a political party? Outside Parliament?

I do peace meetings, and anti-cuts meetings, trade-union meetings and students meetings. I learn a lot. Public intelligence is far greater than the establishment media imagines. The quality of the discussion is higher than it’s been in my recollection for a long time. In the old days it was just niggling between the two political parties. Today there is some serious discussion with thoughtful people.

Are you nostalgic about the past?

As you get older you start to think of the mistakes you’ve made, and wonder why. You think of the possibilities that did exist, that you didn’t take. And then you look at the whole of human progress and see how you can advance it. Every generation has to fight the same battles again and again. There’s no final victory, no final defeat for any idea. You draw inspiration from earlier campaigns and you try to apply what you’ve learned to the present situation.

You and I have lived through the creation of the welfare state, which we were really proud of. And now it is being unraveled.

It is being privatized. People may not grasp the fact, but the vote gives you an opportunity to create things that are not dependent upon the market. And that’s a huge advantage to have–a democratically accountable public sector.

I remember in January 1944, on a troop ship going to South Africa, I went to see the colonel in charge and said we planned to have a meeting to discuss what would happen when the war ends. He said “No politics in it, Benn!” And I said, “Oh, no, no.” Of course, we had the most wonderful political discussion. One lad made a speech I’ve never forgotten. He said: “In the 1930s we had mass unemployment. We don’t have unemployment in wartime. If you can have full employment killing Germans, why can’t you have full employment building homes, building hospitals, recruiting nurses, recruiting doctors and recruiting teachers?” That spirit lead to the welfare state changes in Britain in 1945.

Those ideals have not completely disappeared. The question remains: Why is there plenty of money for war, but not enough for peace?