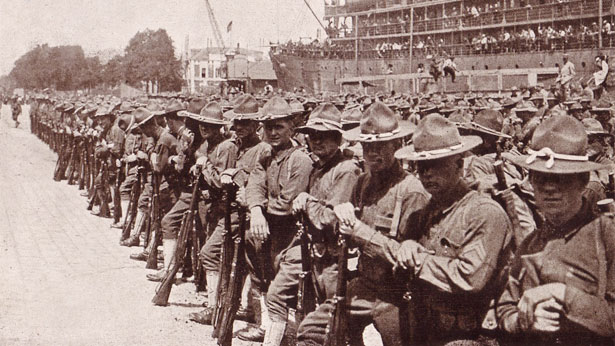 American soldiers, fresh off the boat in France during World War I.

W.W.I: The War That Begat Another

The Lost History of 1914 shows how that year began to sow the seeds of Nazism.

Facilitating the advance of death and thus postwar fascism, Beatty argues, was the unparalleled callousness of the Great War's elites.

Who gets to write a war’s history determines how it is viewed for generations. But in the case of World War I, one of the best accounts of the milieu that triggered the conflict was a novel – or three, to be exact: John Dos Passos’ trilogy, U.S.A., published in the 1930s. Any attempt to understand the war since has had to contend, directly or indirectly, with the granite truth of Dos Passos’ objections to the flood of blood unleashed by that immense and needless slaughter.

Beatty devotes much of his book to the “what if” questions. What if Juarès had not been assassinated by a reactionary? What if Caillaux’s career had not been destroyed by a scandal originating in the hatred of a rightist editor? But Beatty’s most convincing point – and one Dos Passos made – is that the Great War led to Nazism, World War II and the Holocaust. “It will be long before this nation [Germany] will be in any condition to be regarded again as a menace to the peace of Europe,” one paper mistakenly predicted at war’s end. As Beatty observes: “The Allies would not have won the war without starving the German people. But victory through hunger, followed by peace through vengeance, came at a terrible price … the Nazi Party.”

Beatty delineates how famine bred a generation of Germans easily recruited by brown shirts. “We were hungry all the time; we had forgotten how it felt to have our stomachs full,” a German recalled about his wartime childhood. That starvation was of a piece with the overall slaughter, of which journalist and politician Andre Tardieu wrote about France in 1922: “5,300,000 were killed or wounded … not counting 500,000 men who have come back to us from German prisons in very bad shape.”

The response of soldiers, deep in the mud and gore of trench warfare, was, Beatty writes, “live and let live,” a democratic and internationalist sentiment that alarmed the officer corps and the ruling caste, who quickly sought to crush it. For Beatty, trench warfare was not “death’s victory,” but quite the opposite – a concession to the necessity and desirability of survival. It was defensive, not offensive, and therefore affronted the titanic, warlike pride of military notables, who Beatty demonstrates rightly perceived it as a threat to their power.

Facilitating the advance of death and thus postwar fascism, Beatty argues, was the unparalleled callousness of the Great War’s elites, who blithely turned Europe into a charnel house. The revolting spectacle of British Prime Minister H. H. Asquith leching after his young society mistress, from whom he could scarcely manage to distract himself to attend to the butchery of the millions he sent to the front, is a stark emblem in this book of what World War I was about: the idle and indulged elite toying with and disposing of the lives of countless ordinary people.

At the other extreme strode the energetic likes of Mustapha Kemal, the founder of modern secular Turkey who commanded troops at Gallipoli with the famous words: “I don’t order you to attack. I order you to die.” With such governing classes, it is no wonder that “between August 1914 and January 1915 … over a million men died in battle,” sacrifices to “the cult of the offensive” (or what might more accurately be termed the idiocy of attacking in waves in the machine-gun age).

But few civilians knew. As Beatty documents, the press took its cue from its pampered overlords, censored itself without being told to and never mentioned the corpses that blanketed he ground. Instead Beatty gives a list of the euphemisms that clouded journalistic reports: honor, sacrifice, valor, pluck and the fallen. “The ‘cheerfulness in the face of vicarious torment and danger’ that marked the war reporting the soldiers read on leave or wiped their arses on in the trenches ‘roused the fighting troops to fury,’ ” he writes.

With admirable scholarship, riveting footnotes and acerbically unsparing prose, Beatty weaves together these primary strands: socialist struggles for peace, revolutionary fury at an imperialist war (Lenin, Trotsky, etc.), the war’s barbarism, the genesis of Nazism and the extermination of European Jews, and the criminal indifference of the belligerents’ governing elites. The result is a startling study of what Woodrow Wilson called “an injury to civilization,” as indeed all war is, be it in Iraq, Iran, Europe or elsewhere. But in this case, the injury festered, infecting the 20th century with one of the most virulent evils ever witnessed in human history. The socialists, this book shows, were correct. Peace would have been better.